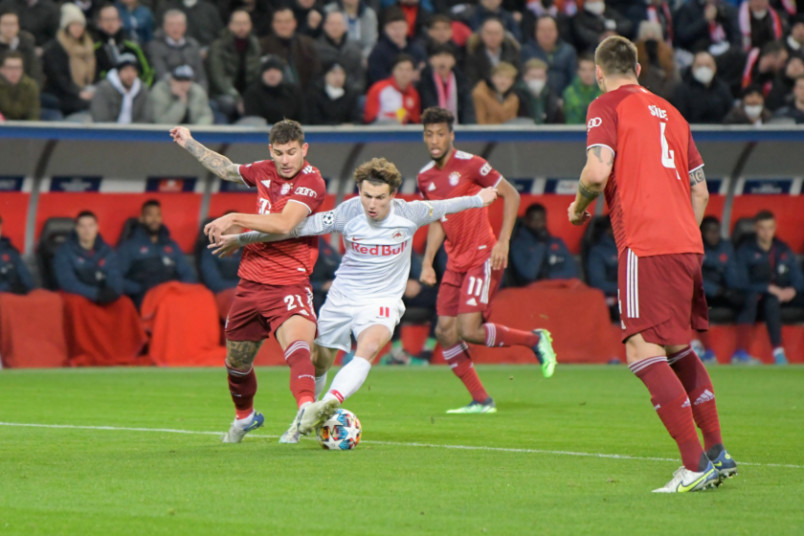 Thursday’s soccer news starts with a big result for Red Bull Salzburg in the Champions League, drawing 1-1 at home with Bayern Munich. Brenden Aaronson got the assist on Chukwubuike Adamu’s 21st minute goal with Bayern equalizing in the 90th. Red Bull held 36% of the possession putting 5 of their 11 shots on goal. Bayern Munich took 22 shots with 9 on goal and had twice the number of corners at 10 to 5.

Coming off of their 4-2 loss at VfL Bochum, Bayern Munich finds themselves in a unique position at the top of the Bundesliga table and a favorite in the Champions League. Six points ahead of Borussia Dortmund at the top of the table, they’re now in a position where they need to make it clear that a return to form is inevitable.

“It got better in the second-half,” Bayern Munich coach Julian Nagelsmann said. “We were too prone to errors in the first-half. The right side of our defence was not good and we looked especially bad for the first goal…. Sometimes the shots weren’t accurate enough. We have to do better.”

Andrija Novakovich subbed on in the 74th minute of Frosinone’s 2-1 home loss to Como in Serie B. Down a goal from the 28th, Francesco Zampano equalized for Frosinone in the 37th. Como scored again in the 43rd minute. Mark McKenzie was on the bench for KRC Genk’s 4-1 home win over Mechelen in Belgium’s Pro League. Luca Oyen put Genk up in the 5th. Mechelen went a man down in the 26th, equalizing in the 46th minute. Genk responded with goals from Mujaid Sadick (66th), Theo Bongonda (80th), and Paul Onuachu (86th).

Moving to the Concacaf Champions League, Club Leon won 2-0 on the road at Guastatoya. Omar Fernandez scored in the 24th and Elias Hernandez doubled the lead in the 34th minute. Cruz Azul won 1-0 at FC Forge, the other Canadian representative. Romulo Otero scored the game’s only goal in the 31st minute. Saprissa and UNAM Pumas drew 2-2 in Costa Rica. Washington Corozo put Pumas up in the 28th with Christian Bolanos equalizing from the penalty spot in first-half stoppage time. Pumas retook the lead through Juan Ignacio Dinenno in the 72nd. Bolanos equalized for Saprissa in the 75th minute.

Serie A on CBS Sports: Juventus vs Torino at 2:45pm. Ligue 1 on beIN Sport: Lille vs Metz at 3pm. Primeira Liga on GolTV: Boavista vs Benfica at 3:15pm. Liga MX on TUDN: Puebla vs Monterrey at 8pm and Juarez vs Santos Laguna at 10pm. ESPN Deportes has Tijuana vs Necaxa at 9:30pm.