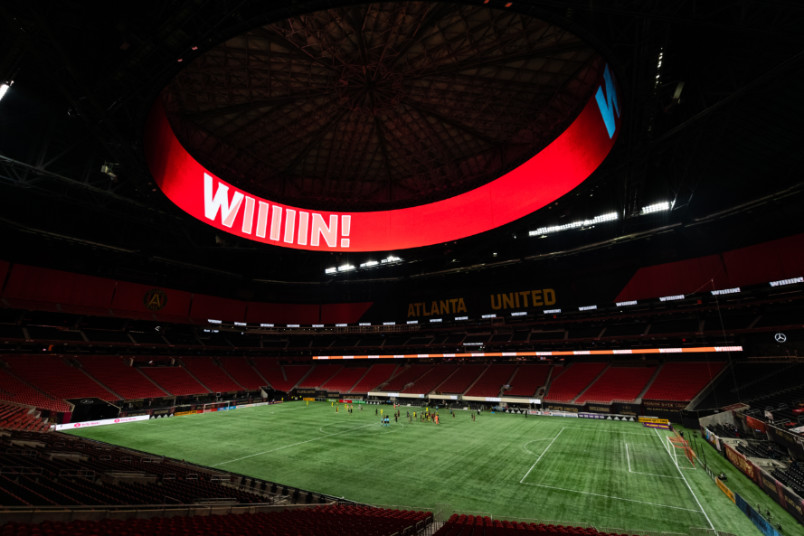 By Jason Davis – WASHINGTON, DC (Feb 11, 2022) US Soccer Players – From the very beginning of its MLS existence, Atlanta United has done it big. The 2017 MLS expansion outfit was never going to be boring. Atlanta reworked more than the idea of what a new team could accomplish. They reset expectations league-wide. It’s worth saying that no other team has matched them in terms of attendance or willingness to spend on incoming transfer fees.

Atlanta United embraced a desire to win, starting as if they’d been there all along. Becoming a powerhouse both on and off the field, chasing Atlanta looked like the immediate future for the Eastern Conference.

Of course, plans don’t always work out as designed. United won a championship in just its second season in the league but found replicating that feat extremely difficult. Entering 2022, the club is on its third full-time head coach since that championship season.

Tata Martino’s exit after celebrating that MLS Cup drew a line between then and now. Atlanta tried a quick revamp, keeping several of the main pieces in place. It worked well enough to match their 2nd-place finish in the Eastern Conference, but 2019 saw them exit the playoffs in the conference finals to Toronto. Not helping things was watching Toronto lose 3-1 at Seattle in the title game.

A year later, Atlanta lost their impact player in the second game of the season. Then the scope of 2020 changed completely, once again asking questions for all of MLS as they navigated a pandemic restart. A last-place finish in group E at MLS is Back meant a coaching change. The club ended up 12th in the Eastern Conference, highlighting just how much work they needed to do. For Atlanta, then and now that means spending considerable amounts of money on players.

Atlanta United’s search for the right coach is just one aspect of the club’s attempt to get back to the top of the MLS mountain. Since finding success with its first batch of South American signings, United has tried to replicate that several times. It’s not the cheaper option, with Atlanta holding the top three positions on the list of the most expensive incoming transfers in Major League Soccer history.

They set the new record earlier this week, re-upping its commitment to the young South American approach. 21-year-old Velez Sarsfield attacker Thiago Almada moved to United for a record MLS fee of $16m. Atlanta worked all the angles to make that happen just ahead of the regular season.

“After an extensive and in-depth due diligence process, we have exercised our exclusive option to permanently transfer in Thiago,” Atlanta United technical director Carlos Bocanegra said, referencing a legal issue involving Almada in Argentina. “He’s a player we’ve been tracking for a long time and he’s shown that he’s one of the best young players in South America over the past few seasons. We feel that his abilities fit well with the kind of attacking soccer that we want to play at Atlanta United and we’re confident that he will be able to play at a high level in Major League Soccer.”

In MLS, committing to “attacking soccer” normally carries with it a price tag or the pressure to transfer a player. Given the league’s rules, it can also create scenarios that only apply to the league’s top spenders. Ezequiel Barco cost Atlanta $15m, the third-largest incoming transfer in MLS history. He now leaves on loan to River Plate to free up a Designated Player spot for Almada.

Sixth on the incoming transfer list is Atlanta’s Luiz Araujo. He arrived last August, collecting four goals and three assists in 16 appearances for the Five Stripes. Araujo cost United a reported $10m and the fee could rise to $12m. While that’s only good enough to be the fourth most expensive player in Atlanta history, it’s more expensive than the richest signing for 27 other MLS teams.

It’s easy to see that Atlanta is playing a bigger game. From a business perspective, spending on incoming fees goes hand-in-hand with recouping money on outgoing transfers. Atlanta leads that list as well, moving Miguel Almiron to Newcastle for $26m in January 2019. They also turned the previous most expensive incoming transfer into a profit when Al-Nassr paid $18m for Pity Martinez in September 2020, a player Atlanta signed for $15.5m. That has him 2nd on the incoming transfer fee list and 4th on the outgoing fee list.

The business of soccer may be more than trophies won, but Atlanta understands their model and their market. The big crowds expect United in the position to win big games. Missing the playoffs in 2020 and exiting to NYCFC in the first round of 2021 isn’t likely to reset expectations. Instead, it increases demands. That’s another thing Atlanta United is aware of since chasing their championship season with a semifinal exit in 2019. Eventually, the spending and their commitment to attacking soccer has to put them into clear contention. It’s not enough to be in and around the playoff spots.

What the other teams in the Eastern Conference should see is Atlanta once again willing to shake off a disappointing season and revamp through the transfer window. The club is still adding pieces ahead of the season. Even a league record signing is only part of those plans. It underlines Atlanta’s overall approach since designing their first roster, taking the risks to win in Major League Soccer.