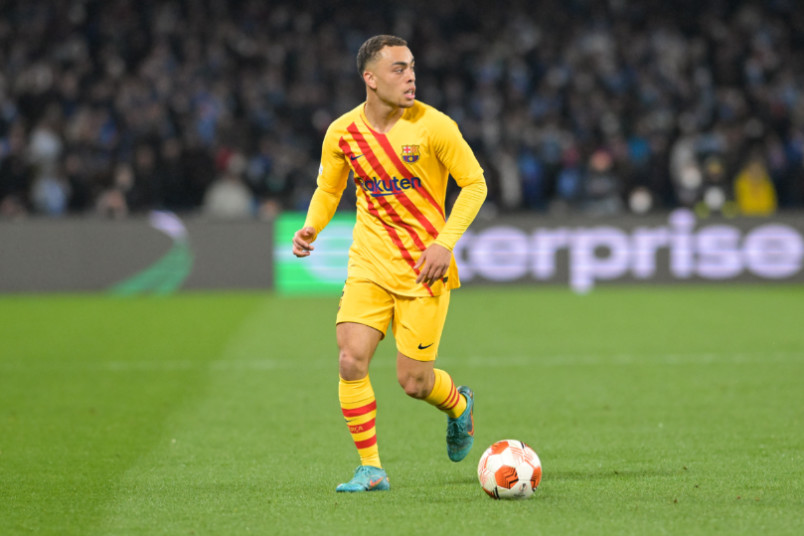 Friday’s soccer news starts in the Europa League knockout round playoffs. Sergino Dest’s Barcelona won 4-2 at Napoli, advancing 5-3 on aggregate. Jordi Alba put Barca up in the 8th minute and Frenkie de jong doubled the lead in the 13th. Napoli converted a 23rd minute penalty, but Barca’s Gerard Pique (45th) and Pierre-Emerick Aubameyang (59th) put the game and the series away. Napoli scored again in the 87th minute. Barcelona plays Galatasaray in the round of 16, with the first-legs set for March 10.

“Perhaps this was the most complete performance of our season,” Barcelona coach Xavi Hernandez said. “We wanted to dominate and we did. I’m happy about the effort we put in and with the football we played. The result is fair. I am very happy for the players and this is the way forward. We are on the right road.”

“After the 2-2 in the first-leg, it wasn’t going to be easy here with this atmosphere for any team. RB Leipzig coach Domenico Tedesco said. “The fans really spurred Real Sociedad on. I’m proud of the team for withstanding this pressure. We stayed patient; we’ve come a bit more mature. It’s not a given the way everyone makes their own contribution to success. You have to give the players and the entire coaching team a huge compliment. It was a really good team performance.”

James Sands was on the bench for Rangers in their 2-2 home draw with Borussia Dortmund to advance 6-4. Dortmund’s Gio Reyna is injured. James Tavernier put Rangers up on the night from the penalty spot in the 22nd with Jude Bellingham equalizing for Dortmund in the 31st. Dortmund went ahead on the night from a Donyell Malen goal in the 42nd, but Tavernier scored again in the 57th minute. Rangers advance to play Red Star Belgrade in the round of 16.

“If you had told me that I was going to score three goals against Dortmund, I would never have believed you that that was going to happen,” Tavernier said. “To get the second one tonight it fell perfect with the volley and the place just erupted and it was an amazing feeling.”

Konrad De La Fuente subbed on in the 82nd minute and scored in Marseille’s 3-1 win at Qarabag, advancing 6-1 on aggregate in the Europa Conference League knockout round playoffs. Pape Gueye opened the scoring in the 12th with Matteo Geundouzi making it 2-0 Marseille in the 77th. De La Fuente finished off the scoring two minutes into stoppage time. Marseille plays Basel in the round of 16, with the first-legs set for March 10.

Cameron Carter-Vickers was on the bench for Celtic, losing 2-0 at Bodo/Glimt and exiting 5-1 on aggregate. Bodo/Glimt scored in the 9th and 69th minutes. Richy Ledezma wasn’t in the squad for PSV’s 1-1 draw at Maccabi Tel-Aviv, advancing 2-1 on aggregate. Yorbe Vertessen scored for PSV in the 84th with Maccabi getting a goal in stoppage time.

Moving to the Concacaf Champions League round of 16, Seattle advanced with a 5-0 shutout of Motagua after a scoreless first-leg. Nicolas Lodeiro opened the scoring in the 33rd and Christian Roldan made it 2-0 in the 47th. Jordan Morris (56th), Kelyn Rowe (62nd), and Leo Chu (74th) added goals. Cruz Azul knocked out Forge FC 3-1 at home and 4-1 on aggregate.

Saturday has the Premier League on USA: Leeds vs Spurs at 7:30am and Manchester United vs Watford at 10am.

Ligue 1 on beIN Sport: Srasbourg vs Nice at 11am and PSG vs St Etienne at 3pm. Super Lig on beIN en Espanol: Sivasspor vs Besiktas at 11am. Primeira Liga on GolTV: Maritimo vs Sporting at 1pm.

Liga MX on ESPN Deportes: Monterrey vs San Luis at 6pm. Telemundo has Chivas vs Puebla at 8pm. UNAM Pumas vs Club America is on Univision at 10pm. MLS on Univision: LAFC vs Colorado at 3:30pm and Fox: Portland vs New England at 7:30pm.

Sunday has the Premier League on USA: West Ham United vs Wolverhampton at 9am.

Scottish Premiership in CBS Sports: Hibernian vs Celtic at 7am. Ligue 1 on beIN Sport: Monaco vs Reims at 7am, Brest vs Lorient at 9am, Troyes vs Marseille at 11am, and Lyon vs Lille at 2:45pm. La Liga on ESPN Deportes: Sevilla vs Real Betis at 10:15am. Super Lig on GolTV: Galatasaray vs Rizespor at 11am. Primeira Liga on GolTV: Benfica vs Vitoria Guimaraes at 1pm.

MLS on FS1: Atlanta vs Sporting KC at 3pm. ESPN has LA Galaxy vs NYCFC at 5pm. Liga MX on UniMas: Cruz Azul vs Santos Laguna at 8pm.

Monday has the Super Lig on beIN Sport: Kasimpasa vs Fenerbahce at 12pm. Primeira Liga on GolTV: Braga vs Santa Clara at 3:15pm. All Times Eastern