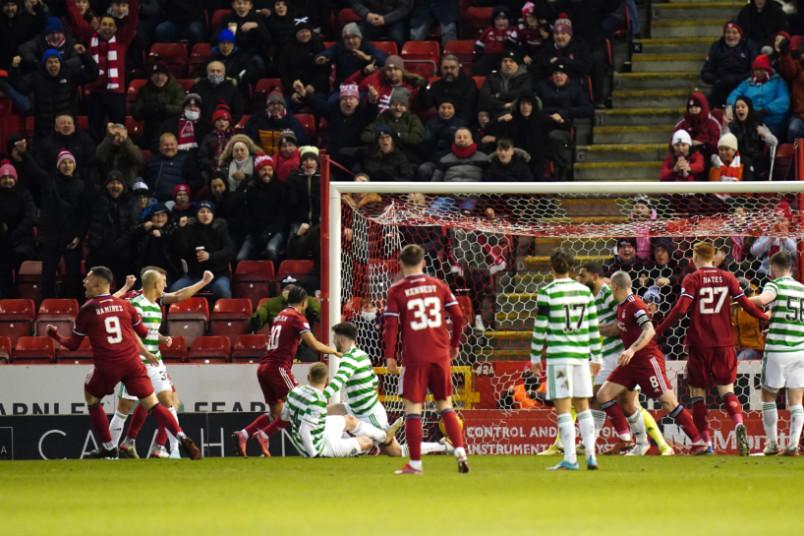 Thursday’s soccer news starts with a goal for a USMNT player in the Scottish Premiership. Christian Ramirez scored in Aberdeen’s 3-2 home loss to Cameron Carter-Vickers’s Celtic. Jota put Celtic up in the 16th minute and Matt O’Riley doubled the lead in the 20th. Ramirez pulled a goal back for Aberdeen in the 56th and Lewis Ferguson equalized in the 61st. Celtic took the lead for good when Jota scored in the 62nd minute.

“We said at halftime that we expected a reaction from them,” Celtic manager Ange Postecoglou said. “They’re a good side, especially here at home, and they’re hard to beat. Set-pieces were obviously a threat. They’re a big physical team with good delivery and we didn’t handle the set-piece situations well which is something we need to improve on, and we lost our composure a bit. But again, it was a good reaction from the lads and it was good to get the third goal and the win.”

Chris Mueller subbed on in the 64th minute of Hibernian’s 2-0 loss at Rangers.James Tavernier converted a 5th minute penalty and Alfredo Morelos doubled the lead in the 57th. James Sands was on the bench for Rangers. Sebastian Soto wasn’t in the squad for Livingston’s 1-1 draw at Ross County. Alan Forrest scored for Livingston in the 50th and Ross County equalized in stoppage time.

Christian Pulisic was on the bench for Chelsea in their 1-0 win over Al Hilal to advance to Saturday’s FIFA Club World Cup final. Romelu Lukaku scored in the 32nd minute and Chelsea goalkeeper Kepa Arrizabalaga made three saves to keep the clean sheet.

‘I think we controlled the game, a big part of the game,” Arrizabalaga said “We created a lot of chances, but they are a team of champions also, so obviously they would create chances as well. I was happy to help the team, happy to be there in an important moment and we are happy that we are going to the final.”

Also at the Club World Cup, Concacaf’s representative Monterrey beat Al Jazira 3-1 to win the 5th-place game. An own goal put Monterrey up in the 4th. Rogelio Funes Mori doubled the lead in the 11th and Cesar Montes scored in the 25th. Al Jazira pulled a goal back in stoppage time.

Zack Steffen was on the bench for Manchester City’s 2-0 home win over Brentford in the Premier League. Riyad Mahrez converted a 40th minute penalty and Kevin De Bruyne scored in the 69th. Josh Sargent missed Norwich City’s 1-1 home draw with Crystal Palace due to illness. Teemu Pukki put Norwich up in the opening minute and Palace equalized in the 60th.

In the Championship, Duane Holmes subbed out in the 86th minute of Huddersfield Town’s 0-0 draw at Preston North End. Holmes saw yellow in the 80th. Matthew Olosunde wasn’t in the squad for Preston. Daryl Dike is injured, missing West Bromwich Albion’s 2-0 loss at Sheffield United. Down a goal from the 22nd, West Brom’s Jake Livermore saw red in the 39th minute. Sheffield United doubled its lead in the 80th minute.

Ethan Horvath was on the bench for Nottingham Forest’s 2-0 loss at Blackburn. James Garner scored for Forest in the 22nd, playing a man up from the 53rd minute. Brennan Johnson converted a 90th minute penalty to finish off the Forest goals.

Konrad De La Fuente was on the bench for Marseille in their 4-1 loss at Nice in the Coupe de France quarterfinals. An own-goal put Marseille up in the 3rd minute. Nice was level by the 10th, adding goals in the 29th, 49th, and 61st minutes. In Belgium’s Pro League, Mark McKenzie was on the bench for KRC Genk’s 2-1 loss at Oud-Heverlee Leuven. Down a goal from the opening minute and playing a man down from a 14th minute red card to Bryan Heynen, Mujad Sadick scored for Genk in the 19th. Oud-Heverlee Leuven converted a penalty three minutes into stoppage time.

Also in the soccer news, the Chicago Fire officially added Xherdan Shaqiri to their squad, completing a transfer with Lyon. “We’re extremely pleased to formally welcome Xherdan Shaqiri to the Fire,” said Chicago sporting director Georg Heitz said. “Xherdan is a game-changing player and someone who will bring joy to our supporters and the city of Chicago. As one of the most accomplished Swiss athletes of his generation, Xherdan joins us at a very important time for the Club and fully believes in what we are aiming to accomplish. We look forward to welcoming him and his family to Chicago very soon.”

ESPN’s Caitlin Murray on the letter members of the WNT sent the US Soccer Federation over protecting players from abusive coaches. The Athletics’s Meg Linehan asks about what the allegations may mean for next month’s US Soccer presidential election. MLSsoccer’s Charles Boehm on the Fire signing Shaqiri. Football365’s Ian King with immediate impact from the changes at Aston Villa.

Ligue 1 on beIN Sport: PSG vs Rennes at 3pm. Primeira Liga on GolTV: Porto vs Sporting at 3:15pm. Liga MX on TUDN: Mazatlan vs Tijuana at 8pm and Puebla vs Atlas at 10pm ET.