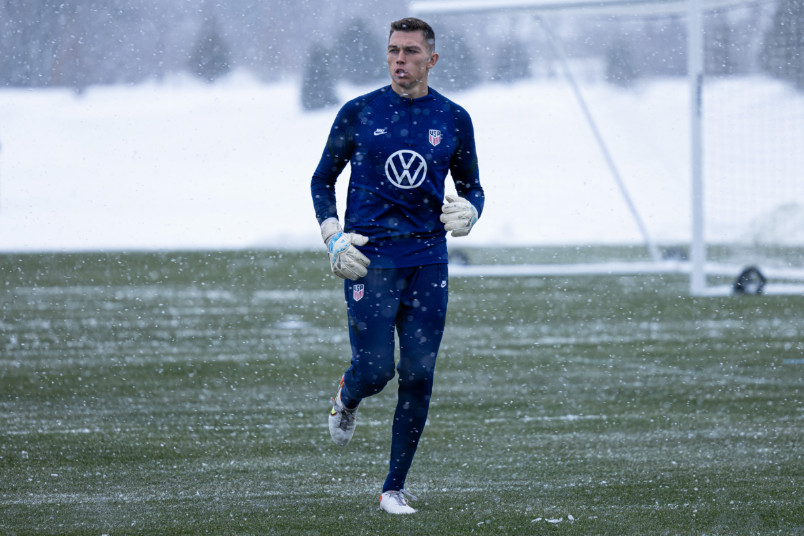 By Jason Davis – WASHINGTON, DC (Feb 18, 2022) US Soccer Players – Major League Soccer just had itself a heck of a pair of transfer windows. The league’s stated goal to become a producer of talent it could deliver to higher levels in Europe is coming into focus. MLS clubs took in record fees between the summer of 2021 and the winter of 2022, proving the potency of its academies and declaring to the world that the shop is open for business.

It’s exactly because of the proven potency of MLS academies that there’s little concern about a talent drain. Not that long ago, the league struggled with fully participating in the transfer market. Moving a young player meant potentially weakening the overall quality. MLS got criticism for “overvaluing” players and preventing positive moves for stars anxious to test themselves in European environments.

Now MLS arrives off a busy winter of outgoing transfers with a cadre of youngsters who figure to be the next wave of European-bound talent. That group includes a few players who have already made something of a name for themselves. This season, they’ll take on even greater responsibility as their teams chase a championship.

San Jose Earthquake forward Cade Cowell is among the first names that come to mind when talking about MLS players most likely to move to Europe. Cowell’s physical gifts are obvious, but no player can get by on his athleticism alone. It’s how Cowell uses his speed and power at such a young age that sets him apart from his peers.

Cowell played in 33 of San Jose’s 34 league matches in 2021, collecting five goals and five assists in the process. He signed a new four-year deal with a club undergoing another transition. The contract ensures that when European teams make the right offer, both the club and Cowell will benefit. After last season’s huge step forward for the teenager, the expectations are firmly in place.

A move to Europe is less of a talking point for the Philadelphia Union’s budding star, 18-year-old Paxten Aaronson, though the attention will come if he remains on his current path. Like his older brother Brenden, Aaronson is an all-action attacking player with a knack for scoring from later runs.

The Union will ask Aaronson to take more off the attacking load this year as he matures as a young professional. His nearly 600 minutes in 2021 provided a tantalizing glimpse of the New Jersey native’s capabilities, setting the stage for a big step in 2022.

Union head coach Jim Curtin has showered Aaronson, along with fellow academy graduates Quinn Sullivan and Jack McGlynn, with plenty of praise in the preseason, pointing to young players they appear to see as key for 2022.

Goalkeepers rarely get the same sort of hype and speculation as outfield players in their teenage years–because so few teenage goalkeepers are good enough to get first-team minutes.

The Chicago Fire’s teenage goalkeeper, Gabriel Slonina, is the rare netminder given the chance to prove what he can do as a pro before his 20th birthday. With his arrival in Chicago’s starting lineup last season came immediate talk about a transfer to Europe.

Some of that is a function of Slonina’s background. He comes from a Polish family in Chicago and carries a European passport. With FIFA’s rules governing the transfer of players always top-of-mind, that passport makes any move simpler.

What Slonina faces this year are the renewed expectations for his club. Chicago was already well out of contention in 2021 when they gave Slonina his chance. Taking full advantage over the remaining 11 games of the season, Slonina turned himself into the type of player getting USMNT callups. He’s already raised his game for a club that needs every advantage.

Like Chicago, DC United is trying to move past the disappointment of missing the playoffs in 2021. Unlike Chicago, United is committed to a style of play under head coach Hernan Losada that becomes more entrenched and hopefully more effective in his second season on the job.

DC’s coach demands a lot of his players, and he needs young legs to make it work. Following the big-money transfer of winger Kevin Paredes this winter, attention in DC will shift to 18-year-old central midfielder Moses Nyeman.

Nyeman has been highly touted for several years already, going back to his signing with United as a homegrown player. His ability to cover ground as a deep-lying midfielder earned him attention from European soccer outlets well before his move into the Black & Red’s first team. He’ll look to build on the 19 appearances he made last year to prove he belongs in the same class as some of the league’s other bright, young stars.

It wasn’t that long ago that any young players transferring out of Major League Soccer would have caused panic about a talent drain. In 2022, there’s no need to worry anymore. The next wave of talent is already here.