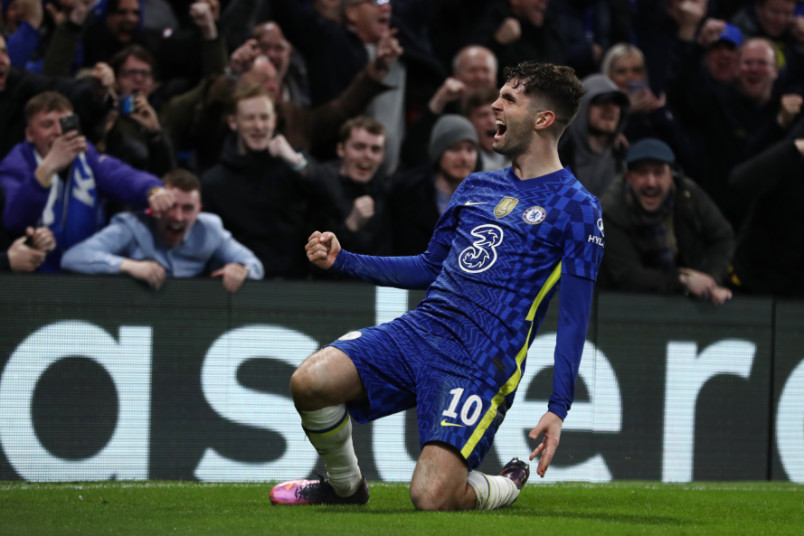 The soccer news starts with Christian Pulisic scoring in Chelsea’s 2-0 home win over Lille in the opening leg of their round of 16 Champions League series. Kai Havertz scored for Chelsea in the 8th minute and Pulisic doubled the lead in the 63rd. Pulisic subbed out in the 80th minute. Timothy Weah was on the bench for Lille.

“It’s a great start for us,” Pulisic said. “We knew we needed to get a good result in this first leg. I thought we defended really well throughout the game and we took our chances at the other end when we needed to. Obviously there’s still a lot of work to do, it’s only half-time in the tie, but we are really happy with our work so far and with the lead we can take with us to Lille.”

In the other round of 16 opener, Weston McKennie exited in the 81st minute of Juventus’s 1-1 draw at Villarreal with what turned out to be a fractured foot. ESPN’s Jeff Carlisle reported that McKennie could miss up to three months. Dusan Vlahovic scored for Juve in the opening minute and Villarreal equalized in the 66th.

“Tonight we wanted to think about developing width on the outside, and in this respect, the team played a good match,” Juventus coach Massimiliano Allegri said. “Paradoxically, we conceded goals at a time when the game was going along without any particular problems. The 1-1 is a good result and, above all, allows you to play the decisive match at the Allianz Stadium….”

Moving to England’s Championship, Ethan Horvath was in goal for Nottingham Forest in their 0-0 draw at Preston North End. Matthew Olosunde wasn’t in the squad for PNE. Daryl Dike is injured, missing West Brom’s 2-1 loss at Middlesbrough. Jayson Molumby put West Brom up in the 28th with Boro equalizing in the 60th and going ahead for good in the 69th minute. A league down, Lynden Gooch subbed out in the 70th minute of Sunderland’s 1-1 home draw with Burton Albion. Trailing from the 53rd, Sunderland’s Ross Stewart equalized three minutes into stoppage time.

In the Concacaf Champions League, Club Leon advanced to the quarterfinals with a 1-0 home win over Guastatoya, taking the series 3-0 in aggregate. Elias Hernandez scored in the 11th minute.

Europa League on Galavision: Real Sociedad vs RB Leipzig at 12:45pm and Rangers vs Borussia Dortmund at 3pm. TUDN has Lazio vs Porto at 12:45pm and Napoli vs Barcelona at 3pm. Copa Libertadores on beIN Sport: Olimpia vs Atletico Nacional at 7:30pm. Liga MX on TUDN: Pachuca vs Mazatlan at 8pm and Queretaro vs Toluca at 10pm. Concacaf Champions League on FS2: Cruz Azul vs Forge at 8:30pm and Seattle vs Motagua at 10:45pm ET.