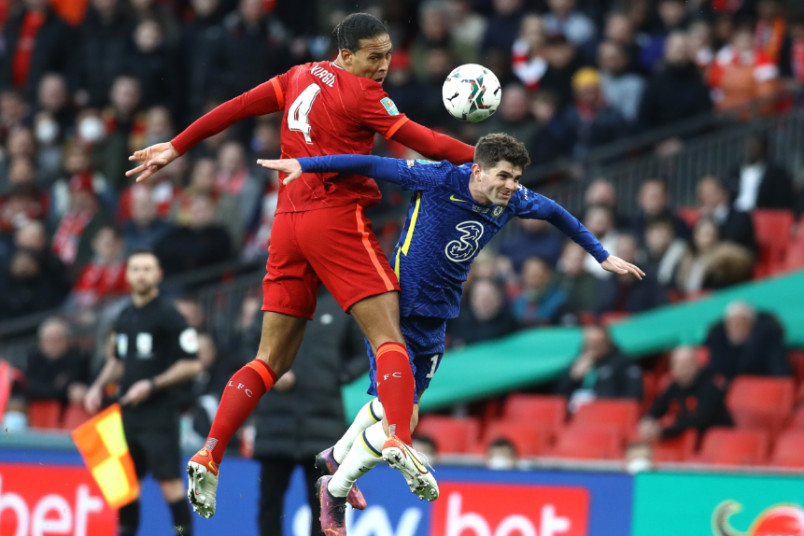 The roundup of USMNT players in Europe starts with England’s League Cup. Christian Pulisic’s Chelsea finished 0-0 with Liverpool through extra time at Wembley, losing the League Cup final 11-10 on penalties. Pulisic subbed out in the 74th minute.

“We have to accept the quality of the opponent, and this is maybe the most dangerous attacking side at the moment in Europe, and full of individual quality and playing such a high rhythm,” Chelsea manager Thomas Tuchel said. “So defending like this and playing like this on this level made me very proud today. I saw a brilliant match of football over 120 minutes, we played a huge part in it. I have a feeling that we created a bit more but maybe that’s also subjective. This game could easily have gone either way. You need a bit of luck, you need a bit of momentum to win it.”

Luca de la Torre subbed out in the 84th minute of Heracles’s 2-0 home win over PEC Zwolle in the Eredivisie. De la Torre scored in the 19th and Sinan Bakis doubled the lead in the 55th. Cole Bassett subbed on in the 87th minute of Feyenoord’s 2-1 loss at AZ. Falling behind to penalties in the 19th and 30th, Lutsharel Geertruida scored for Feyenoord in the 52nd.

Mix Diskerud’s Omonia lost 4-2 at home to APOEL in the Cypriot First Division. APOEL went 3-0 up in the 19th, 48th and converted a 55th minute penalty. Diskerud pulled a goal back for Omonia in the 59th. APOEL scored again in the 69th with Andronikos Kakoullis getting a goal for Omonia in the 79th.

Josh Sargent’s Norwich City lost 2-0 at Southampton in the Premier League. Southampton scored in the 36th and 88th minutes. Tim Ream’s Fulham won 1-0 at Cardiff City in the Championship. Aleksandar Mitrovic scored in the 41st minute. Ethan Horvath picked up the shutout in Nottingham Forest’s 2-0 home win over Bristol City. Brennan Johnson scored in the 38th and James Garner added a goal in the 55th.

Duane Holmes subbed out in the 77th minute of Huddersfield Town’s 2-0 win at Birmingham City. Levi Colwill scored in the 27th and Lewis O’Brien made it 2-0 in the 44th. A league down, Lynden Gooch’s Sunderland won 3-0 at Wigan Athletic. Bailey Wright scored in the 2nd and Ross Stewart added penalties in the 38th and 87th minutes. Gooch saw yellow in first-half stoppage time.

Cameron Carter-Vickers’s Celtic drew 0-0 at Hibernian in the Scottish Premiership. Chris Mueller subbed on in the 62nd minute for Hibs. Christian Ramirez’s Aberdeen drew 1-1 at Dundee United. Aberdeen fell behind to a 4th minute penalty, equalizing through a 16th minute own-goal. Sebastian Soto subbed on in the 72nd minute of Livingston’s 4-0 win at Dundee. Bruce Anderson scored in the 6th with Scott Pittman doubling the lead in the 18th. Anderson scored again in the 21st and Jack Fitzwater added a goal in the 65th minute.

Tyler Adams subbed out in the 59th minute of RB Leipzig’s 1-0 win at VfL Bochum in the Bundesliga. Christopher Nkunku scored in the 82nd minute. John Brooks’s Wolfsburg drew 2-2 at Gladbach. Jonas Wind put Wolfsburg up in the 6th minute with Sebastiaan Bornauw making it 2-0 in the 33rd. Gladbach cut the lead in half in the 42nd, going a man up when Wolfsburg’s Maxence Lacroix saw red in the 70th. Gladbach equalized in the 82nd minute.

Ricardo Pepi subbed out in the 59th minute of Augsburg’s 1-1 home draw with Borussia Dortmund. Thorgan Hazard scored for Dortmund in the 35th with Noah Bazee equalizing in the 78th minute. George Bello subbed on in the 76th minute of Arminia Bielefeld’s 3-0 loss at Bayer Leverkusen. The goals came in the 30th, 57th, and 81st minutes.

Gianluca Busio subbed out in the 79th minute for Tanner Tessman in Venezia’s 3-1 loss at Verona. Down two from goals in the 54th and 63rd, Venezia’s David Okereke scored in the 81st. Verona added a goal in the 88th. A league down, Andrija Novakovich subbed on in the 56th minute of Frosinone’s 3-0 loss at Cittadella.

Sergino Dest’s Barcelona shutout Athletic 4-0 at home. Pierre-Emerick Aubameyang scored in the 37th. Ousmane Dembele made it 2-0 in the 73rd with Luuk de Jong scoring in the 90th. Menphis Depay made it 4-0 three minutes into stoppage time. Yunus Musah’s Valencia won 1-0 at Mallorca. Gabriel Paulista scored in the 4th. Valencia finished a man down with a red card to Ilaix Moriba two minutes into stoppage time.

Tim Weah subbed on in the 74th minute of Lille’s 1-0 win at Lyon. Gabriel Gudmundsson scored in the 35th. Erik Palmer-Brown subbed out in the 77th minute of Troyes’s 1-1 home draw with Marseille in Ligue 1. Dimitri Payet converted a Marseille penalty in the 28th. Yoann Touzghar equalized for Troyes in the 90th minute.

Bryan Reynolds’s Kortrijk lost 2-0 at KRC Genk in the Belgian Pro League. Paul Onuachu scored in the 17th and Joseph Paintsil doubled the lead in the 22nd. Sam Vines subbed out in the 77th minute of Royal Antwerp’s 4-1 loss at Club Brugge. Michael Frey scored for Antwerp in the 29th. Club Brugge equalized through Denis Odoi in the 31st and Hans Vanaken converted a 37th minute penalty. Sargis Adamyan scored in the 59th and Andreas Olsen added a goal in the 64th.

Reggie Cannon’s Boavista won 3-2 at Estoril Praia in the Primeira Liga. Trailing from the 6th, Peter Musa equalized for Boavista in the 20th and Rodrigo Abascal put them ahead in the 49th. Estoril Praia converted a penalty in the 54th. Boavista’s Luis Santos scored in the 85th minute. In the Swiss Super League, Jordan Pefok’s Young Boys beat Sion 3-1 at home. An own goal put Young Boys up in the 21st with Sion equalizing in the 55th. Fabian Rieder scored for Young Boys in the 57th and Meshak Elia finished off the goals in the 88th minute.

In Austria’s Erste Liga, Ulysses Llanez’s St Polten drew 1-1 at home with Blau-Weiss Linz. Down a goal from the 36th and up a man from the 65th, St Polten’s Kresimir Kovacevic scored five minutes into stoppage time. Kenny Saief’s Ashdod lost 3-1 at home to Netanya in Israel. Down to goals in the 2nd, 81st, and 87th, and up a man from the first minute of stoppage time, Ashdod’s Mohammed Kna’an converted a penalty.