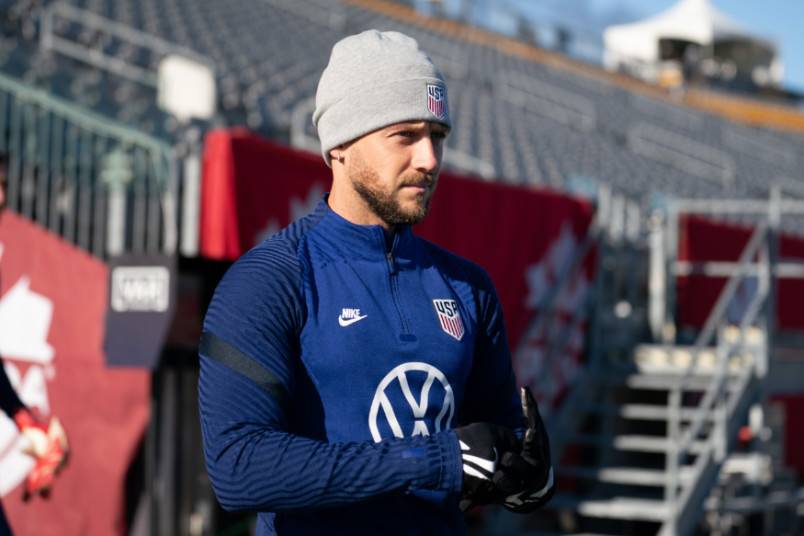 By Charles Boehm – WASHINGTON, DC (Feb 10, 2022) US Soccer Players – On the surface, the USMNT’s recently-completed winter World Cup qualifying window was a triumphant one for FC Dallas. Five of the club’s academy products (Kellyn Acosta, Reggie Cannon, Jesus Ferreira, Weston McKennie, and Ricardo Pepi) took the field in last week’s 3-0 win over Honduras in Minnesota, four of them as starters. Another, Walker Zimmerman, is also an alum of sorts, beginning his pro career at FCD as a Generation adidas draft pick back in 2013.

“FC Dallas is the backbone of the USMNT,” declared the club’s Twitter account, and it was hard to argue. That group of players was highly productive across the three Concacaf Octagonal matches, playing key roles and chipping in goals and assists. The respective coaching staffs overlap as well. This winter, former FC Dallas head coach Luchi Gonzalez effectively swapped roles with Gregg Berhalter’s longtime assistant Nico Estevez, who took the reins in Frisco in December.

Transfers of homegrowns have also offered vindication of the FCD way, drawing millions in fees from big clubs in Europe and Mexico. Scouts around the world now recognize it as a legitimate assembly line for talent.

What’s awkward for Dallas is their recent results on the field have been a great deal less exciting. They failed to qualify for last year’s playoffs and won just one match across their three trips to the postseason in the three years before that. After winning a Supporters’ Shield and US Open Cup double in 2016 under Oscar Pareja, it’s become something of a yo-yo club. They’ve veered from 13th to sixth to 13th to 11th and then down to 23rd in the overall league table in the years since.

It’s a simple but haunting question: Why isn’t all that talent making for a more successful first team?

“Our academy continues to produce great players,” said club president Dan Hunt as Estevez was introduced to media last month. “We have big expectations but we also recognize this is a process. I was thinking about our season this last year, and 33 points in 34 games obviously is not the standard. You need to be in a space where you can achieve between 48 and 50 points to get into the playoffs. We’re just going to have to look and build on some of the positives that we had last year but also at the same time, there’s some things that have to be fixed.”

So change has come to Frisco this offseason.

A founding member of MLS, Dallas remained resolutely budget-conscious even as newer counterparts began to splash cash in recent years. With a small local media footprint and generally modest suburban crowds in one of the league’s first-generation soccer-specific stadiums, that once seemed defensible, or at least plausible. The rising tide of outbound transfer sales has now reached a point where it’s less so, especially given the upswing in ambition across MLS.

Pepi’s move to Augsburg meant a club-record fee reportedly near $20 million. Other seven-figure sales have helped pack the coffers quite nicely. More should come, considering the scale of their player-development system. Now it seems Dallas is ready to spend to build a squad.

“We’re taking those proceeds and immediately reinvesting them in the product on the field,” vowed Hunt last month. “And we’re doing that in a couple of different ways. We’re going to do it with the cash that we’re receiving. So we’ll use it for transfers, and we’re also going to take the allocation money and put it to work right away. And so coupling those things together, we’re going to improve the FC Dallas roster and give Nico and his staff a group of players that are going to be able to compete.”

Alan Velasco, a 19-year-old Argentine winger who last summer drew unsuccessful transfer bids from Premier League side Brighton & Hove Albion, has arrived from Independiente for a reported price of $7 million. Hunt himself called Velasco “probably the biggest signing in the history of the club,” and he’s definitely the most expensive.

FCD also pried Paul Arriola away from DC United, outmaneuvering fellow suitors Club America via a record-breaking trade package of $2 million in up-front allocation money and other assets. Ferreira stays put with a big new contract that makes him a Designated Player, the first MLS homegrown to rise to that status at his original club. Loan deals brought in FC Porto fullback Nanu and Maarten Paes, a young Dutch goalkeeper from FC Utrecht. Rumors have further moves unfolding in the summer window.

As similar to Gonzalez’s as Estevez’s philosophies seem to be, he’s already implemented new ideas. Players have noted a different structure and sensibility to his meticulously-planned training sessions. Even the floor plans at Toyota Stadium have been in flux. The club installed new cafeteria and gym facilities and a more open office design to encourage the staff to collaborate.

“All those changes, I firmly believe, can help us become a club that can win things in the future,” Estevez told The Dallas Morning News. “All those little things will allow the players and the staff to be able to come together in one space which can make it gratifying to be able to go to work and from there, that helps us perform in the best way.”

Perhaps most notably, FCD followed the lead of several MLS clubs by launching a player care department. As much attention as the transfer market tends to gobble up, the club’s job has only just begun when a player arrives. Helping them manage the day-to-day logistics of life, especially those from other countries or cultures, can spell the difference between success and failure.

“This is something that we thought was missing to help the player be fully focused on training, games. So we have someone fully dedicated now helping players to adapt to the community, adapt to the club,” said technical director Andre Zanotta. “And sometimes with the family, we all have personal issues and if we can help them address this, especially those players coming from abroad, I think we will have better performance from them. So we’re addressing every single thing that we believe can help the player to perform better.”

That could well prove the savviest of FCD’s new investments. The elephant in the room is that their academy kids have outperformed their imports for several years running. Pepi, for example, got his chance to shine last year because of the disappointing output of veteran DP striker Franco Jara.

“You can attribute those things, but yet I could say the teams have been very good, but we haven’t gotten across the threshold of winning MLS Cup and that’s what it’s really about,” said Hunt last month when asked about that track record. “So we’re focused about getting the right pieces. We have a vision here, our staff has a vision. We’re doing our very best to execute on that for them so we can put a great team on the field.”