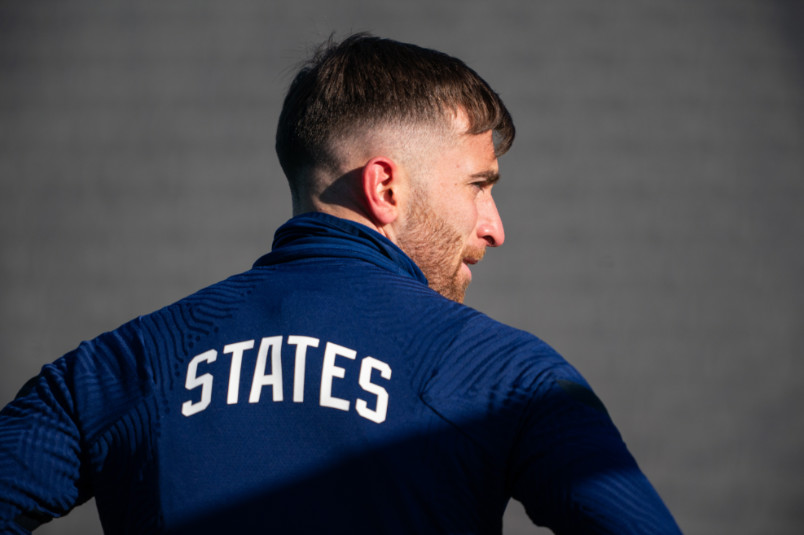 By J Hutcherson (Feb 1, 2022) US Soccer Players – The USMNT closes out the January/February international window on Wednesday night (7:30pm ET – FS1) in interesting conditions to match an interesting situation. After losing 2-0 at Canada on Sunday, the United States plays its cold weather finale in freezing conditions in St Paul, Minnesota. They face the team with the worst record in the Octagonal. Honduras has yet to win a game, drawing three and losing seven, most recently a 2-0 home loss to El Salvador.

What this means for the United States now is the same as it did in September. After drawing at El Salvador and home to Canada to open the first window of the Octagonal back in September, the United States closed out that window with a 4-1 home win at Honduras. Back then, Honduras was a losing Concacaf Nations League semifinalist that gave the United States a tough game in June. The next month, they exited the Gold Cup in the quarterfinals 3-0 to Mexico. No shame in either of those results, pointing to a potential contender for a World Cup spot after losing to Australia in the playoff during the 2018 cycle.

Instead, Honduras has become the biggest question in the region. For all the attention Costa Rica has gotten as they struggled to regain their form, Honduras has had the biggest slip of all. They’re currently 14 points out of 4th-place and the playoff spot they took last time. Their last point came in the opening game of the October window at El Salvador.

No one on the USMNT technical staff is likely to keep that in mind when scouting their next opponent. More to the point, they’re likely to use it as motivation to not take anything as a given against a struggling team in need of any result. Honduras isn’t a bunker and counter team. They held the majority of possession against Canada and El Salvador. Against Canada, both teams finished with three shots on goal, but Honduras had double the shots taken 14 to 7. Against El Salvador, Honduras put five shots on goal to their three, taking 18 shots to El Salvador’s ten.

Obviously, not all shots are the same. Some teams push to play a counterattacking game. Giving up the ball because you’re confident the other team won’t punish you is a tactic, especially in this region. Honduras isn’t breaking teams down to get those opportunities. Unfortunately for scouting, Honduras played most of the second-half a man down against Mexico on October 10. That changed the scope of a game where Honduras trailed 1-0 at the half. What ended in a 3-0 win for El Tri probably should’ve been more in a game where they spent most of the second-half in complete control.

That’s also part of the story in the Octagonal. 3-0 and 4-1 are what pass for lopsided score lines in the final round. There are no teams getting regularly blown out, keeping the goal difference closer to normal up and down the table. Canada’s undefeated streak has them on double the goal difference of the 2nd-place United States, +12 to +6. 3rd-place Mexico is at +5, tied on points with the USA. 5th-place Costa Rica is even, with goal difference falling off with Jamaica (-5), El Salvador (-6) and winless Honduras at -14. Still, it’s worth considering that with seven losses, Honduras is only at -14. During the last cycle, Trinidad & Tobago finished the Hexagonal with two wins and eight losses at -12. In 2014, it was Jamaica with five draws and five losses at -8. The addition of two more teams isn’t skewing things noticeably.

For the United States, tagging another game and their second meeting with Honduras as “must win” might as well be business as usual. For a team at or near the top of the table over this compacted schedule, assigning vulnerability to this version of the USMNT is difficult. They beat Mexico in Cincinnati in normal conditions. The uniqueness of the January/February window reflected in venue gamesmanship by the United States and Canada has now worked for both of them. It’s the United States getting another opportunity to show what weather can mean in pursuit of three points at home.

It does have meaning. For all of the questions about playing Honduras in cold weather, it shows that the US technical staff will play up any advantage. Facing an opponent in search of something that passes for form over an unexpectedly difficult run of results, there’s no point in treating it any differently from a game against the rest of the top four. Qualifying campaigns can shift on details, something that the United States recognized in September the first time that they reclaimed their narrative against Honduras.