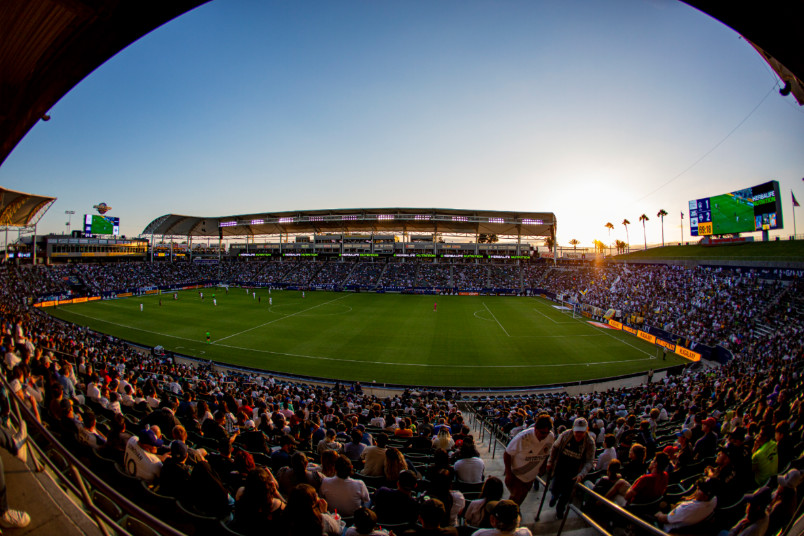 By Luis Bueno – RIVERSIDE, CA (Feb 23, 2022) US Soccer Players – Once again, it’s not a good time to be a middling team in the greater Los Angeles area. LA pro soccer is obligated to step up and challenge for a championship in 2022. This town demands it.

The Super Bowl is fresh on Angelenos’ minds. Just a couple of weeks ago, the LA Rams hosted the Super Bowl and won it in dramatic fashion. The game itself was one thing, but the pageantry and showmanship the event had on display took it to another level. Southern California will remember that moment for a long time to come.

Meanwhile, a year after winning the title, the LA Dodgers made it to the National League championship series before falling to the eventual World Series winners. If this Major League Baseball season ever gets underway, the club would be favorites to contend for another World Series appearance.

LA has so many pro sports teams that becoming a title town is difficult. The LA Lakers are having a difficult season, but the 1980s Showtime Lakers is part of the reason why LA loves winners. Fall short, and expect passing interest at best. If the region’s two MLS teams can’t turn around last season’s disappointments, and quickly, that may be their situation this summer.

Both the Galaxy and LAFC pride themselves on putting on a show and being the center of attention. However, both would prefer that attention be for the right reasons. Another regular season struggle only highlights the more successful options for LA sports fans.

While it seems like this is becoming a standard refrain in covering LA soccer, the Galaxy and LAFC can’t afford to disappoint. Two teams in the same city was supposed to have made both teams more competitive. That didn’t happen a year ago, and it can’t happen this season. LA should be the center of the MLS universe, not a bit player or an afterthought.

Both the LA teams missing the playoffs in 2021 officially took the region out of contention. The Galaxy and LAFC needed just one win apiece to reach the postseason. The Galaxy was let down by its defense in a 3-3 draw against Minnesota, while LAFC collapsed and lost 5-2 at Colorado. The overall feeling was that both clubs unnecessarily played themselves into difficult situations.

This time around, there are another set of significant questions for both sides. The Galaxy will count on Javier Hernandez and newly-arrived Designated Player Douglas Costa in their attack. Kevin Cabral should also be a factor, but once again it’s the defense that’s at issue. The Galaxy did not make any major moves to address a back line that yielded 54 goals last year. The Galaxy’s defense has been in shambles since 2017, which coincidentally was the beginning of this dark age the Galaxy currently finds itself in. However, the Galaxy keeps doubling down on big-name attacking players, Zlatan Ibrahimovic first, then Hernandez, and now Costa, while relying on a defense that lets them down.

LAFC had its own defensive issues last year, but the team did make moves. Goalkeeper Maxime Crepeau is part of the club now, solidifying the position. Meanwhile, losing defensive midfielder Eduard Atuesta may turn into a bigger issue. The club brought in Kellyn Acosta and Ilia Sanchez to try and fill the defensive midfield hole Atuesta left in his wake. LAFC;s attack suffered without Carlos Vela available, no surprise considering how much of a difference-maker he is in this league. With Vela healthy and the emergence of Cristian Arango, LAFC has attacking options. They could need more in a tough Western Conference.

There is certainly a lot for the LA teams to sort through individually but collectively the teams know how to put on a show. The LA derby has instantly become one of the most-hyped events in Los Angeles and across MLS. The rivalry may not be on par with Seattle and Portland, but it could get there in time.

The two matchups this season are set for April 9 and July 8. LA gets one showcase match fairly early in the season and another right in the middle of summer. With these two games being so relatively early in the season, neither team will directly cost the other a playoff spot, at least not during the latter stages of the campaign.

Both teams have already made it clear that their biggest games play out in the postseason. LAFC has subbed in nicely for the Galaxy’s earlier bitter rivals, one of the MLS originals seemingly always in contention. Living up to that reputation is as difficult as LAFC watching another team break its short-lived single-season points record.

What they have to prove in the days leading into the 2022 season is that both can contend. That’s step one, pushing past the almost but not quite feeling of last season. That begins with their opening games. LAFC will host Colorado on Saturday while the Galaxy gets New York City FC on Sunday.

The tests then will come early for the LA clubs. Colorado won the regular-season Western Conference crown a year ago while NYCFC lifted MLS Cup. The Rapids and New York were surprises, showing how quickly a team can come together and, in the case of the Rapids, fall off. A 4th-seed winning MLS Cup carries a clear message for any rebuild. Create the opportunity, especially in a city used to champions. LA soccer fans may know sooner than either club might like if they’ve done that for 2022.