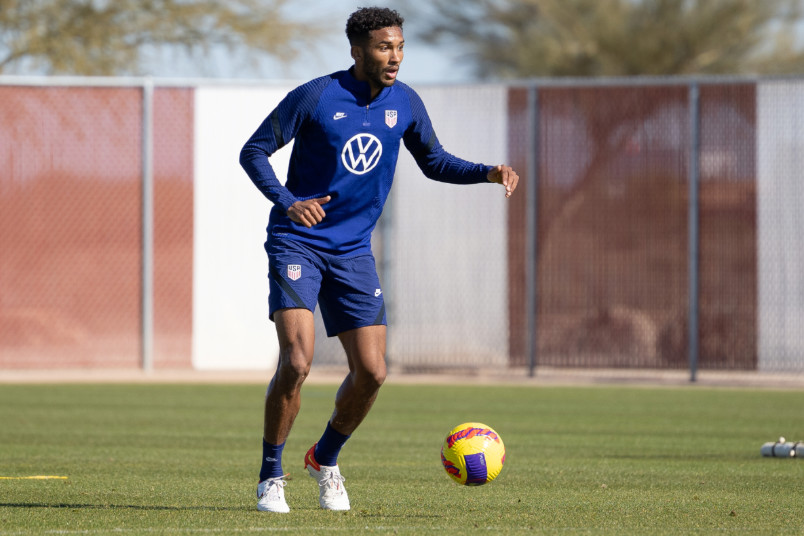 By Jason Davis – WASHINGTON, DC (Feb 2, 2022) US Soccer Players – For a long time, there was only one kind of outgoing transfer involving Major League Soccer’s most talented young players. They were the type that involved a mild bidding war for a lone in-demand player for a fee that, while respectable, amounted to almost all of the transfer revenue MLS would bring in from that window.

Think Clint Dempsey, Jozy Altidore, or slightly more recently, Matt Miazga. Both Dempsey and Miazga went for less than $5 million, while Altidore’s move came in at slightly less than $10 million. The record Altidore set with his transfer to Villarreal would stand for a decade and came to embody the possibilities latent in American soccer to transfer young talent for significant fees.

There wasn’t another notable transfer in any of those seasons to overshadow Dempsey to Fulham, Altidore to Villarreal, or Miazga to Chelsea. None of the moves were much of a surprise, coming as they did following heavily reported-upon negotiations. When there’s just one big transfer in a given season, it’s bound to get attention from every outlet interested in American soccer.

Dempsey and Altidore left for Europe before the league’s developmental efforts were fully underway. Miazga’s transfer came amid a rising tide in the homegrown talent coming out of MLS academies, but Miazga himself wasn’t a product of that push. The best days for MLS as a selling league were most certainly ahead of it. We’re now seeing what that looks like in practice.

The most influential factor in the league’s newfound importance to the world transfer market and ability to drive significant revenue from player sales is the success of academies in producing high-quality professionals. That said, there are other factors involved.

“Big by MLS standards” outgoing transfers hit a new high mark in the last two windows. FC Dallas alone completed three of those deals: Tanner Tessman (to Venezia FC for a few near $4 million), Bryan Reynolds (to Roma for $8 million), and Ricardo Pepi (to FC Augsburg for around $20 million).

Ten years ago, every one of those moves would have felt like a groundbreaking occurrence. Even five years ago, the player that generated the smallest fee would have been a triumph for Major League Soccer. In 2021/22, those players feel more like the norm than distinct outliers.

Part of that lies in the fact that neither Tessman nor Reynolds are USMNT regulars. Each has call-ups, but their national team prospects still appear to lie in the future. Any young American player who made the jump to Europe for a seven-figure fee in the days of Dempsey, Altidore, or even Miazga was presumed to be central to any USMNT plans.

It’s a different situation for some of the latest group of players. There may be a benefit in going to Europe without carrying the pressure of starring for the national team right away. MLS and other American soccer pathways, in addition to a healthy influx of dual nationals, are deepening the pool even as the market is waking up to the value of American talent.

Adding to that are MLS clubs, and by extension, the league, more willing than ever to let talented young players go when sizable offers arrive. Some of that is facilitated by a smaller than ever soccer ecosphere. MLS is taking advantage of those developments.

In addition to a pair of high-profile moves abroad for America’s new generation of strikers this month – Pepi to Augsburg and Orlando’s Daryl Dike to West Bromwich Albion – a handful of other transfers have snuck under the radar or come out of the figurative blue. The Colorado Rapids are responsible for two of them.

The Rapids famously finished in 1st-place in the Western Conference in 2021 despite having the league’s lowest payroll. A significant part of that success came due to the contributions of the team’s cadre of young talent. Among that group were midfielder Cole Bassett, a product of the Rapids academy, and defender Auston Trusty, a Philadelphia Union homegrown player acquired by Colorado via trade.

The Rapids will begin 2022 without Bassett. They’ll say goodbye to Trusty midway through the season following two surprising transfers. Whatever interest the club had in holding onto the pair to make another run at an MLS Cup lost out to a commitment to send its best and brightest onto Europe.

Bassett joined Dutch power Feyenoord on an 18-month loan with a purchase option. It’s not a seven-figure move. Still, Colorado clearly believes that they stand to profit from Bassett’s development at the end of the 2022/23 season. The jump to the Netherlands will put Bassett into one of the great incubators of talent in Europe. Like Tessman and Reynolds, Bassett gets his big move before establishing himself in the national team.

Trusty is going to Arsenal this summer. To call that move a surprise would be to under-count the number of eyebrows raised when news broke of the 23-year-old defender’s sale to the Premier League side on Sunday. The two clubs share ownership, but the direct impact for the Rapids is MLS-specific. It’s general allocation money to spend.

MLS is more than happy to embrace this brave new world of transfers. American players are on the rise, and the market is exploiting inefficiency. For a league that not that long ago averaged one notable move a year, these are interesting times.