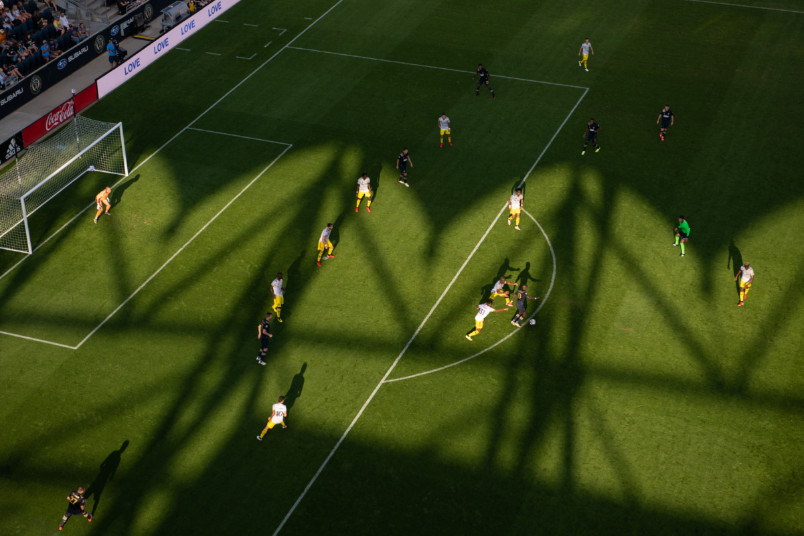 By Charles Boehm – WASHINGTON, DC (Feb 24, 2022) US Soccer Players – As season openers loom, coaches and fan bases around MLS tend to engage in roster arithmetic. How much talent and productivity is gone? What reinforcements have arrived? What missing pieces must still be added to the equation?

Usually, the sight of both a club’s leading scorer, as well as its second-leading assist-getter, headed for the door would be cause for alarm. That’s the situation for the Philadelphia Union, who begin their 2022 schedule at Minnesota United on Saturday afternoon.

Over the winter, they traded away striker Kacper Przybylko to Eastern Conference counterparts Chicago Fire FC and sent playmaker Jamiro Monteiro to the San Jose Earthquakes, two of the highest-paid players on the squad, for decent stacks of allocation money.

Head coach Jim Curtin even called Monteiro, a Cape Verde international, “among the top players I’ve ever worked with in my short coaching career.” Yet there’s been little of the sort of outcry you might expect from Philly’s demanding supporters. That’s because the Union’s model is so established that these moves become about raising the team’s potential ceiling rather than limiting it.

Philly’s academy continues to churn out quality prospects. As a result, Homegrowns should fill a good chunk of Monteiro’s minutes. That starts with Paxten Aaronson, Jack McGlynn, and Quinn Sullivan, a trio who have shown huge potential in their first-team appearances thus far. Then there’s Daniel Gazdag, a creative Hungarian international who arrived last spring for a reported seven-figure transfer fee and found his feet over the course of the 2021 season.

“When you lose a player of Jamiro’s quality, we’re not better,” Curtin told reporters earlier this month, though the Union’s decisions suggest they believe they can improve sooner than later, perhaps even to the point of their most talent-rich squad ever. “He’s a guy that meant a ton to the club, won a lot of games with us and certainly now it will be an opportunity for others to fill in.”

Up top, Philadelphia replaced Przybylko with Mikael Uhre, a Danish international with UEFA Champions League experience who cost them a club-record fee of nearly $3 million. In their preferred two-forward setup, he’ll often be joined by another newcomer, Julian Carranza. A $6 million acquisition by Inter Miami three years ago, the Argentine moved to Philly on loan amid his parent club’s reboot in the wake of heavy sanctions levied for their violations of salary budget and roster guidelines.

It’s not that uncommon for ambitious teams to bolster their attacking corps in such a manner. What’s striking about the Union’s moves is that they are already paid for ahead of time, and then some. After reaping more than $16 million on the transfer sales of Paxton’s older brother Brenden, defender Mark McKenzie, and transactions like the Przybylko move, Philadelphia is in a strong financial position.

The idea of a team “reloading” rather than “rebuilding” has become a sports cliche. In the Union’s case, they are justified in using the phrase. They truly believe the rising generations can and will eclipse the veterans they follow.

In helping execute minority investor Richie Graham’s long-term vision of an academy-centered philosophy, Curtin and sporting director Ernst Tanner have steadily accrued credibility with principal owner Jay Sugarman. With the size of the war chest Philly have amassed and their steady climb into the East elite, highlighted by the 2020 Supporters’ Shield and the deepest playoff run in their history last fall, it’s not hard to see why.

“If you rewind to when Ernst got here three years ago and you look at the last three seasons, I’ll just say I think we’ve done a good enough job, and we’ve done it kind of in a unique, smart way,” said Curtin. “I think it gained more trust from ownership, and I think that they see that now.”

Sugarman told the Philadelphia Inquirer after the breakthrough 2020 campaign, “The financial commitment has been very, very significant, and we’ve had to make a bet on that idea, but I think you’re starting to see why we made that bet.” It took a while for vindication to materialize, but a grassroots focus has finally opened up a self-sustaining path to winning.

Photo by the Philadelphia Union