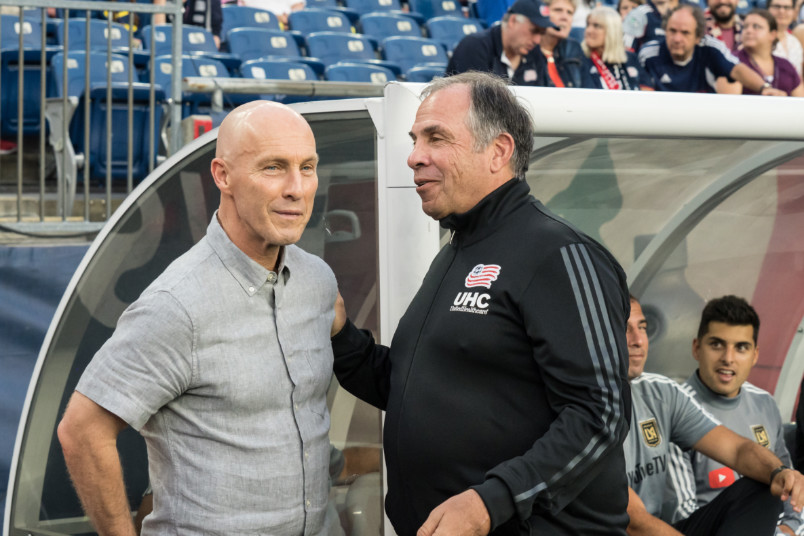 By Charles Boehm – WASHINGTON, DC (Feb 17, 2022) US Soccer Players – One major Canadian media network has compared his roster adjustments to a sledgehammer demolition job. Another outlet cheekily dubbed him “Snow Plow Bob” for his readiness to sweep the decks clear upon his midwinter arrival. Neither seemed that far out of place in regards to an offseason overhaul that has seen well over half the 2021 squad cut, traded, sold, loaned out, or otherwise departed.

Bob Bradley has certainly not been complacent in his first few months at Toronto FC. Arriving at one of MLS’s “big clubs” in the wake of an acutely disappointing second-from-bottom finish in the overall league table, he now has a general manager’s powers in addition to head coaching duties and is using them.

Arguably the most prominent TFC departure is simultaneously a high-profile reinforcement for an Eastern Conference counterpart that finished at the very top of the table last year, a whopping 45 points ahead of the Reds.

Jozy Altidore was officially unveiled as a member of the New England Revolution this week. His long-rumbling issues with Toronto finally ended with a contract buyout that allowed him to sign a three-year Targeted Allocation Money deal with the Revs, with some of his wages still being paid by TFC. In Arena, he’s linking up with someone who knows his top level and is willing to bet he can regain it. The trust between them is evident.

“Bruce, he’s the same,” Altidore said on Tuesday of his former USMNT and New York Red Bulls coach. “Funny enough, he hasn’t changed at all. I can’t believe it. He’s the same exact way he was about 15 years ago when I worked with him at the club level and in a lot of ways I think that’s really good. In this industry, people don’t let success get to them. They stay grounded, they stay the same people, and they stick to the things that got them to where they are. I see a lot of that in Bruce, but he still wants to win.”

On the surface, it seems almost unfair that a rebuilding Toronto would help Bruce Arena add depth and variety to his Supporters’ Shield-winning attack. Yet a prime reason Bradley’s Toronto can move on from the Altidore era with clear heads is the impending summer arrival of Italy international Lorenzo Insigne on what is reportedly the largest contract in MLS history. These sorts of transactions, in both directions, have become a facet of doing business at the level that Toronto aspire to and competing with a team like New England.

Bradley and Arena have known one another for decades. The relationship dates all the way back to Bradley working on Arena’s staff at the University of Virginia in the 1980s, then later at DC United and the USMNT. Their time together, and natural comparisons to their respective USMNT tenures, have always linked them. They also happen to share similar struggles, perhaps even the toughest chapters of their club careers, at MLS’s original New York club. More recently, Bradley has taken a similar step to Arena in terms of adding a GM’s duties and powers to his mantle.

A relationship marked mainly by years of mentorship and collaboration may now be entering a new chapter.

Bradley marked his arrival as an MLS head coach by leading the Chicago Fire past DC at the 1998 MLS Cup final. Their paths diverged in significant ways when Bradley moved abroad after his stint in charge of the national team, globetrotting from Egypt to Norway to France, and eventually the Premier League. That also limited their head-to-head faceoffs. In this century, Bradley vs Arena or vice-versa hasn’t happened very often. There were a couple of Chivas USA vs New York Red Bulls games in 2006 and a single LAFC-Revs league match, a 2-0 away win for Bradley, in 2019.

Toronto and New England will face off at least twice in 2022. It might be unfair to expect Bradley to go toe-to-toe with Arena right away given their teams’ markedly different stages of development. TFC fans accustomed to perennial runs at hardware may be inclined to disagree, and many neutrals would enjoy watching them compete as well. As consistent as their personalities have remained, the two men have evolved in intriguing ways, both tactically and ideologically.

As we wait for that story to unfold, the legacy they’ve already built is plain to see. Just glance around a league full of former players and assistants.