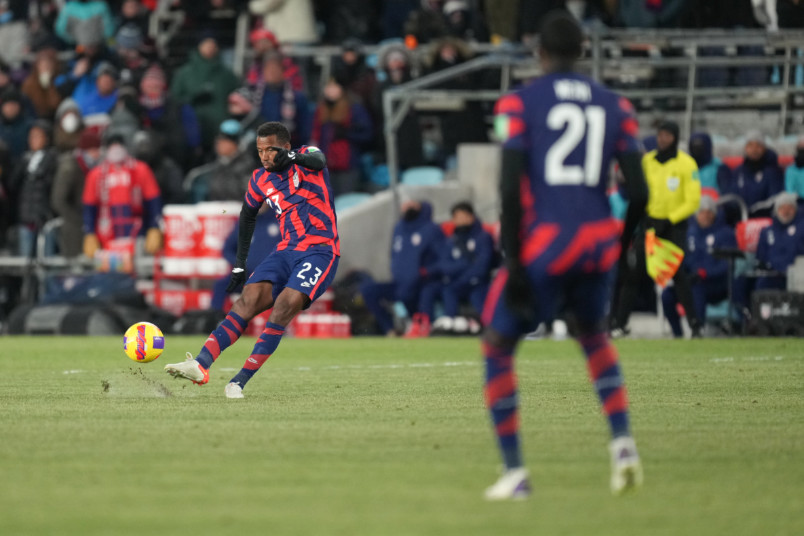 By Charles Boehm – WASHINGTON, DC (Feb 3, 2022) US Soccer Players – Eleven down, three to go. That’s the Concacaf Octagonal schedule math for the USMNT now that the winter international window is done and dusted with Wednesday’s 3-0 win over Honduras on an arctic night at Allianz Field. It might also apply to the quest for a place at the World Cup in Qatar.

Like the calendar, the United States has about 80% of the qualifying job done, and most projections put its likelihood of automatic qualification even higher than that. The USMNT is in 2nd-place in the Ocho with 21 points. That sets up a crucial and potentially stressful final sprint next month.

Here are some talking points as the USMNT reaches the run-in.

Set pieces are back

Across different rosters, coaches, styles, and eras over the years, the most effective versions of the USMNT have usually been dangerous on free kicks and other restarts. Yet the team came into this window carrying a curiously ineffective track record in this area in the Octagonal. Zero goals scored on set pieces, one conceded.

That changed overnight. All three of Wednesday’s goals resulted from restarts, with Kellyn Acosta curling in one excellent delivery after another in his first start since the loss to Panama in October. Acosta had an expected assists number of 0.63, which even allowing for the single-game sample size puts a number behind how well he did.

“I thought we did a really good job of that as a whole. Kellyn had some really good service,” said captain Walker Zimmerman, who scored the Yanks’ second on such a play.

Having explained beforehand that he wants his side “in the positive” in this category, Gregg Berhalter framed the goals as a long-awaited return on consistent investment.

“We think that’s a big advantage that we have, and we haven’t been converting our opportunities. But looking at the process of it rather than the results of it, we’ve had good opportunities to score and we just haven’t scored,” he said, citing a few near-misses in last month’s matches. “So in terms of the process, I’ve been happy with both offensive and defensive set pieces. And tonight, we got the results of it, we got conversion from it.”

USMNT minutes have been hard to come by for Luca de la Torre in this cycle. The Heracles midfielder focused on keeping his place at his club in preseason rather than go to the Gold Cup and was left off a couple of Berhalter’s first Ocho rosters. So Wednesday marked his World Cup qualifying debut.

“Really big opportunity for me. In some ways, I’ve worked my whole life for this,” said de la Torre postgame. He did not waste that chance, producing what his coach called an “excellent, exceptional” performance.

De la Torre was everywhere in the center of the park, energetic and assured on both sides of the ball. Showing a particular gift for breaking pressure and advancing play on the dribble, he flashed a good understanding with Weston McKennie. He also showed that his skill set compares well to fellow #8 Yunus Musah’s, a vital area in Berhalter’s 4-3-3 system.

Almost everything around Pulisic is magnified and loaded with extra meaning thanks to his club address, and status as the trailblazer and most experienced USMNTer of his generation. That amplified the discourse when he didn’t play up to his own high expectations in the first two games of this window.

Putting all that in perspective, he remains capable of game-breaking plays at any moment. The proof arrived when he came off the bench to slot home the decisive third goal, much like he did when notching the game-winner in November’s 2-0 win over Mexico in Cincinnati. Asked if he considered keeping his superstar rested once Zimmerman scored against Honduras, Berhalter called 2-0 “a terrible lead to have” and made clear that Pulisic’s every moment on the pitch remains vital.

“It was a very difficult decision. But I felt it was a decision that was made to put him in the best possible position to make the impact that we know he can make,” said the coach. “When he’s in those positions on the field, he has the quality to make finishes like that, to score goals like that. And that’s the impact that he made for the group and really helped seal the victory for the team.”

Resilience, both individual and collective

One of the biggest wild cards of this cycle was the new feature of a third match in most of the windows thanks to COVID-19’s disruption and delay of the qualifying schedule. The USMNT is now 3-0 in those games with nine goals scored and two conceded. Even allowing for the fact that last-place Honduras was the opponent in two of those, it’s a positive reflection of the program’s current depth, fitness, and resilience.

Over the past year or so, the team has won in a variety of manners. Sometimes it slogged out results with set pieces and defending, other times by pressing aggressively, still others via fluid, expansive possession play. Similarly, a growing list of players have provided key contributions at key junctures, often eclipsing expectations in doing so, like de la Torre, Acosta, and goalkeeper Matt Turner.

As frustrating as the away losses to Panama and Canada may have been, the US remains undefeated on home turf and has posted five clean sheets. That’s keeping it on course for Qatar.

“There was an awareness of the importance of the game, being aware that three points was pretty much a necessity, just with where we are and where we want to go,” said Zimmerman. “So I think we really took that upon us and felt that, not in a bad way, but just in the sense of responsibility and execution that needed to happen.”

What waits in March

A win over Honduras was particularly vital in light of the March schedule. Next month features visits to Mexico and Costa Rica sandwiched around a home game with Panama in Orlando. Most USMNT watchers don’t need reminding that those two road trips are historically dreaded not just for the US but the entire region, given the hosts’ strength on familiar turf.

The Yanks have never won a qualifier in either nation. Fortunately for them, they may not have to do so this time around, especially if they beat Panama at Exploria Stadium like they were in the 2018 cycle.

Sitting four points back of the USMNT and Mexico in fourth place, Los Canaleros are the team with the best chance of displacing one of those giants from the three automatic qualification slots. Panama will host Honduras and Canada on either side of its trip to Florida. Even if they took maximum points from those, the Panamanians would still need to take away points off the US, something only Canada achieved so far.

That’s not to discount Costa Rica, which has climbed to just one point back of Panama and could still push into the top half with an outstanding March. The potential permutations are many. Still, in an era of constant change and upheaval, it appears likely that the age-old “win at home, draw on the road” formula would punch the USMNT’s ticket to Qatar next month.