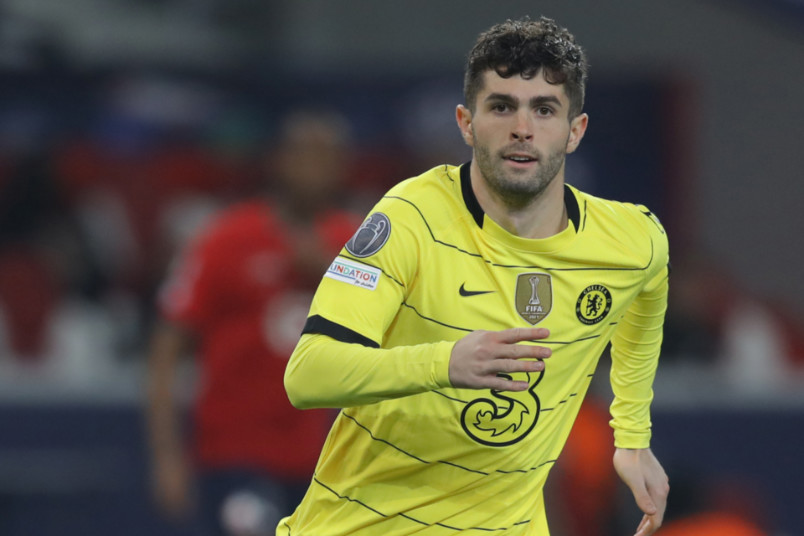 Thursday’s soccer news starts with UEFA’s Champions League. Christian Pulisic scored in Chelsea’s 2-1 second-leg win at Timothy Weah’s Lille, advancing 4-1 on aggregate. Burak Yilmaz converted a Lille penalty in the 38th minute with Pulisic equalizing three minutes into stoppage time. Chelsea’s Cesar Aspilicueta scored in the 71st minute. Weah subbed on for Lille in the 58th and Pulisic subbed out in the 74th.

“We know they’re a good team and coming here is never easy,” Pulisic said. “In the first-half they were strong and there was a good atmosphere in the stadium. They put a lot of pressure on us right away. They gave us a lot of trouble and then with the handball penalty they were back in the game. We made a few changes and were able to calm the game down a bit with some possession but the goal we scored before halftime was really important because it restored confidence.”

With Weston McKennie out for the rest of the season, Juventus lost 3-0 at home to Villarreal, 4-1 on aggregate. Villarreal converted a 78th minute penalty, scored in the 85th, and converted another penalty in stoppage time.

“We played well for most of the match, we have to accept this bad result, we’re sorry,” Juventus coach Massimiliano Allegri said. “But I can’t blame the boys for anything. I congratulate Emery and Villarreal because they played a fair game. Their intention was to perhaps take the game to extra time or take advantage of certain moments, and they did it in the best way; we were a bit too naive.”

Gio Reyna subbed on in the 69th minute of Borussia Dortmund’s 1-0 win at Mainz in the Bundesliga. Reyna assisted on Axel Witsel’s goal in the 87th minute.

“We knew it would be difficult here,” Witsel said. “We expected Mainz to be aggressive in their challenges and with a lot of deep running. It was a tough game for us, especially in the second half. We didn’t enjoy that much possession. That got better in the second half when we also had opportunities to score. We are happy with the win, also because we were able to increase the gap to the teams behind us.”

Duane Holmes’s Huddersfield Town lost 2-0 at Millwall in the Championship. Millwall scored in the 27th and 57th minutes. Ethan Horvath was in goal for Nottingham Forest’s 3-1 home win over Queens Park Rangers. Falling behind in the 40th, Djed Spence equalized for Forest in the 55th. Ryan Yates put Forest up for good in the 83rd with Brennan Johnson scoring in the 87th minute. Matthew Olosunde wasn’t in the squad for Preston North End’s 4-0 loss at Luton Town. The goals came in the 9th, 28th, 42nd, and a 59th minute own-goal.

Two Major League Soccer teams exited the Concacaf Champions League at the quarterfinal stage. CF Montreal and Cruz Azul drew 1-1 at Olympic Stadium, with Cruz Azul advancing 2-1 on aggregate. Cruz Azul opened the scoring in the 44th with Rudy Camacho equalizing for Montreal on the night in the 79th minute.

New England’s 3-0 first-leg lead didn’t hold, losing 3-0 at UNAM Pumas and exiting 4-3 on penalties. Juan Dinenno scored for Pumas in the 33rd and 49th with Sebastian Saucedo adding a goal in the 59th minute. There is no extra time in the Champions League, with the series moving directly to penalties. Both teams saw their attempts saved in the third round with the Revolution missing in the fourth.

“Even as well as Pumas played, and we didn’t play well, we had a chance right at the end of the game to score and didn’t, then obviously lost on penalties,” New England coach Bruce Arena said. “We’re not surprised the way that the game looked. We knew it was going to look like that and the altitude was going to be a factor. And give them credit. We made too many mistakes tonight.”

The Ringer’s Musa Okwonga asks a fundamental question about Chelsea. The Guardian’s Jason Steinberg looks at the bidders for Chelsea. DW with the potential for a title race in the Bundesliga. ESPN’s Derek Rae profiles Bundesliga club Hoffenheim.