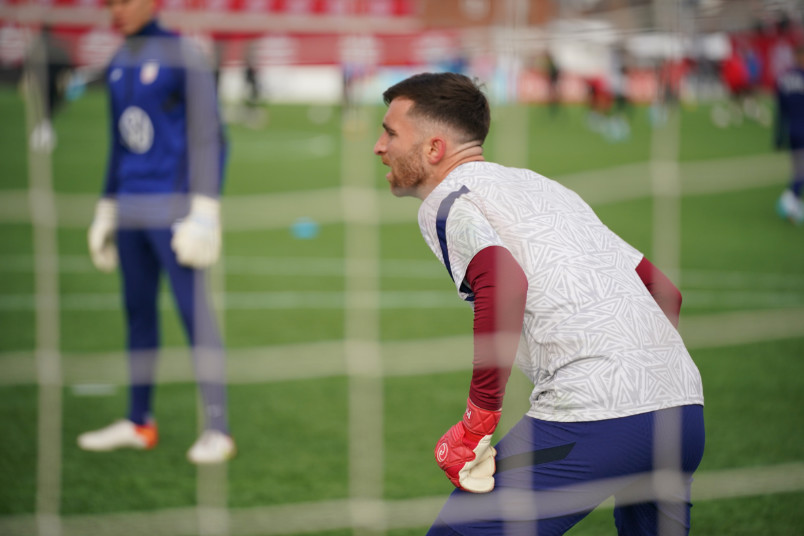 By Jason Davis – WASHINGTON, DC (Mar 9, 2022) US Soccer Players – Major League Soccer has notably changed its mind about how to operate in the international transfer market. Now an exporter of talent whenever the offer is right, there’s one position where there was never much of a question for European teams in search of options. America produces standout goalkeepers, something that has seen those players leave MLS almost from the very beginning.

Brad Friedel returned to the States for Major League Soccer’s debut, winning Goalkeeper of the Year in 1997. He left Columbus for Liverpool later that year. Tim Howard impressed Manchester United in a friendly in 2003, eventually spending 15 seasons in the Premier League before finishing his career as the Rapids #1. Zack Steffen left the Crew for Manchester City, and New England goalkeeper Matt Turner joins Arsenal this summer.

Add in a long list of other standouts, some of whom never left the league, and goalkeeping is a strength for Major League Soccer. Keepers that look like career backups can quickly turn into starters. They can be critical parts of multiple teams, in part due to how much longer goalkeepers can continue to play at a high level. It’s easy to see that as a given in a league that continues to produce standout goalkeepers.

Nick Rimando spent 20 seasons in MLS as the #1 at three different teams. Somehow, he never won a Goalkeeper of the Year award, all the evidence necessary for how spoiled MLS has been at the position. Rimando was competitive for the starting job with the USMNT, something that wasn’t the same situation for several American MLS Goalkeeper of the Year winners over the league’s history.

The USMNT goalkeeping pool is normally a mix of MLS and former MLS goalkeepers that moved to European clubs. Goalkeepers typically last long enough that there’s a distinct difference in the generational shift that occurs at other positions. The turnover is slower, if slightly more dramatic. Tony Meola to Friedel/Kasey Keller with the reminder that Meola was the third keeper in the 2002 World Cup squad. Friedel/Keller to Howard and Guzan. The current situation, where there is clear competition for the top spot in the depth chart.

2021 MLS Cup champion New York City FC features one of those keepers, Sean Johnson. Johnson has never won an MLS Goalkeeper of the Year award, but his consistent record of excellent play garnered him respect across the league during his time with two different teams. Johnson’s defensive leadership and ability to play the ball out of the back in NYCFC’s system makes him valuable to the club.

It was Johnson’s heroics in Portland last year that pushed NYCFC to its first MLS title and earned him the game’s MVP award. At 32, Johnson should have more than a few seasons left to help them chase a second league championship.

Then there’s the other extreme. In December, USMNT coach Gregg Berhalter called in a 17-year-old standout for Johnson’s old club, the Chicago Fire. At a position where serving a lengthy apprenticeship isn’t out of the ordinary even for elite goalkeepers, Gabriel Slonina took the top spot in Chicago late last season. Now, he’s an MLS starter drawing overseas interest. When it comes time to make a move, a selling league is likely to do just that.

Building around a goalkeeper is part of what works in MLS. We’ve got multiple examples of what a quality goalkeeper can mean for an MLS team across years of staying competitive. Goalkeeping might be a position that’s only a problem when it’s an obvious problem, but continuity and longevity are proven difference-makers. They can help a struggling club stay in games and eventually turn losses into points.

San Jose goalkeeper JT Marcinkowski could be a mainstay for years to come, but that could require avoiding the temptation to sell. At 23, Marcinkowski is the Earthquakes’ starter following a few seasons serving as the backup. No American goalkeeper under 25 played more games than Marcinkowksi in 2021. Only Slonina looks positioned to match him this year.

How the market adapts both within MLS and beyond for goalkeepers should be on the minds of a lot of clubs in this league. Selling players means needing replacements, the old truism of the transfer market where moves can weaken selling clubs. Those replacements could mean venturing into that broader transfer market like Charlotte FC did for their expansion season. It could also mean American goalkeepers within MLS recognizing their value and adjusting their career expectations accordingly.