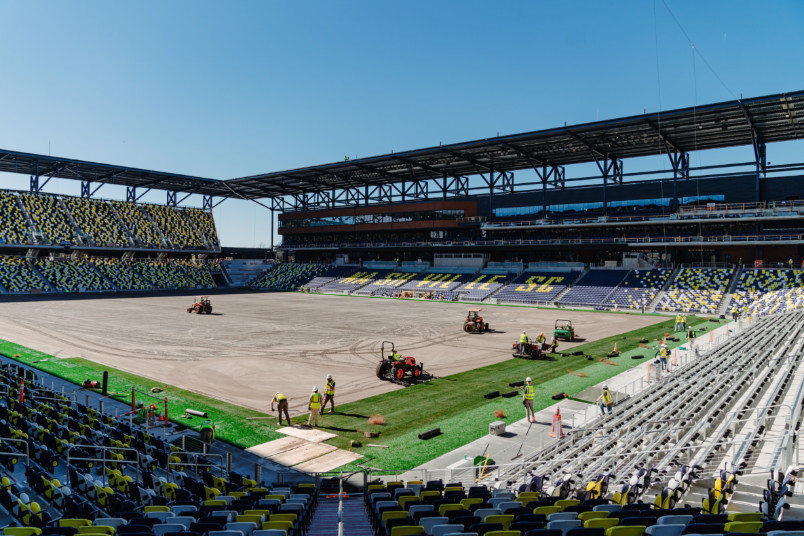 By Jason Davis – WASHINGTON, DC (Mar 4, 2022) US Soccer Players – Nashville SC’s honeymoon period is most decidedly over. The good news is that the 2020 MLS expansion entry hardly needed one at all. At the start of season three, Nashville can be rightly called a contender. There’s no doubting Nashville’s status as they move from the Eastern to the Western Conference. Now, the club carries expectations that they’re in a position to meet.

Nashville sent a message about the seriousness of its title challenge in the first week of the new season. Starting the schedule in Seattle carried with it easy excuses for entering week 2 with no points. The Sounders are a near-universal pick to take home at least one piece of MLS silverware this season. Instead, the visitors finished 90 minutes with a 1-0 win and three points.

Midfielder Anibal Godoy scored the lone goal off a well-worked team move that went through attacker Randall Leal. Godoy isn’t typically the one to score goals for Nashville, but his contribution in Seattle is a sign that this team still has plenty of ways to win matches. Winning matches is easier when you’re never out of them.

The magic of Nashville is anything but. Head coach Gary Smith is a practical coach who prioritizes organization and effort. From that platform, Nashville can play with any team in the league. It may not always be the most attractive version of soccer, but there’s no denying it gets the job done. When you don’t concede many goals, it doesn’t require scoring many to collect points.

What Nashville is doing is letting a reputation for defensive-minded soccer tell their story. Meanwhile, their smart roster building and sound tactics mean the club is more prolific on the attacking end of the field than it is given credit for.

In 2021, Nashville finished in 3rd-place in the Eastern Conference, just behind Philadelphia via the wins tiebreaker. Had it been goal-difference, Nashville would’ve taken the second spot. The Union conceded 35 goals, just two more than Nashville’s 33, but Smith’s team outscored Philadelphia 55 to 48.

That’s why Smith expressed frustration over the league’s tiebreaker rules, which allowed the Union home-field advantage when the pair met in the conference semifinal. Philadelphia won that game on penalties. Philadelphia earned the right to play at Talen Energy Stadium because it won two more games than Nashville.

Nashville’s goal total was good enough for fourth in the conference, belying the club’s image as a stingy, goal-shy team. More to the point, it showed the progression of the team in its third season. Smith’s platform gave rise to an effective attack led by an MVP candidate and augmented by one of the most underrated players in MLS.

Hany Mukhtar’s season would have been good enough to earn him the trophy in all but a handful of the league’s 26 seasons. Though he was beaten to the honor by New England’s Carles Gil, Mukhtar took his place among the brightest attacking stars in the league with his 16 goals, 12 assists campaign.

General manager Mike Jacobs deserves credit for his ability to operate within the league’s restrictive salary rules and use the internal market for players who can help Nashville win. Jacobs and the technical staff also made smart foreign signings to augment that domestically-based talent.

Plenty of teams, especially recent expansion teams, have missed wildly on the player meant to be the center of the attack. LAFC’s acquisition of Carlos Vela is the last key attacking piece acquired by a team entering its first season that truly worked out.

Austin FC sent Tomas Pochettino out on loan after one disappointing campaign. Inter Miami went through a protracted transfer saga and spent considerable money on Rodolfo Pizarro. Two years after the South Florida club’s launch, he’s no longer with the club. Where Mukhtar fits in Nashville, Pizarro never found his groove with Inter. The less said about any of FC Cincinnati’s early acquisitions, the better.

The difference between LAFC’s move for Vela and Nashville’s canny signing of Mukhtar is one of cost. There was nothing wrong with an expansion team going with a proven high-quality player when LAFC convinced Vela to leave Spain, but Nashville’s budget raised the level of difficulty.

Nashville has spent the transfer market, most notably on forward Ake Loba last season, but that’s a part of their approach, not the focus. Maximizing the MLS market was just as central.

The club made smart choices in acquiring Dax McCarty and Walker Zimmerman for the first season. CJ Sapong gets less attention. The former Sporting, Union, and Fire forward joined the club in 2021 and added a dangerous element at the front of the formation. In 33 regular season matches, Sapong put in 12 goals. He was especially dangerous in combination with Mukhtar.

This season, Nashville added former Red Bulls midfielder Sean Davis and veteran MLS attacker Teal Bunbury. Davis paired with McCarty in week 1, fitting perfectly into a team that already had an established identity before Davis arrived. His familiarity with McCarty, the two played together for the Red Bulls in 2015 and 2016, made the adaptation smoother.

Nashville isn’t flashy. The club’s style of play won’t turn heads, even if its attacking prowess is underrated. When entering MLS, Nashville decided that having a competitive team would matter more in its market. Putting those pieces into place, the approach is a rousing success.

The move to the Western Conference makes things a bit more difficult for Nashville, thanks in part to the greater among of travel the club will face. Regardless, the consensus is that Nashville will contend this season. Even playing on the road until May 1, when they open their new 30,000-seat stadium, doesn’t look like a problem. It also means plenty of home games later in the season. The honeymoon period never mattered for Nashville, but the good times are just beginning.