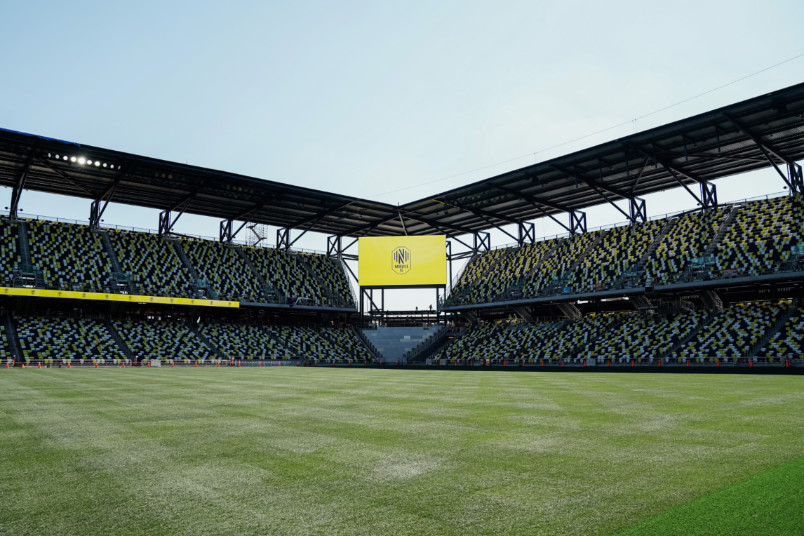 By Jason Davis – WASHINGTON, DC (Mar 18, 2022) US Soccer Players – Opening a long list of soccer-specific stadiums is one of Major League Soccer’s greatest achievements. Control of the schedule depends on control of venues, making MLS teams the primary tenant. The league’s latest stadium arrives on May 1 when Nashville SC opens up a 30,000-seat stadium located on the city’s fairgrounds. Named GEODIS Park, it will be the largest soccer-specific venue in the United States and Canada.

As with every soccer stadium project in this part of the world, Nashville’s new building required plenty of money, navigating a political labyrinth, and lots of work. Considering how difficult it is to get anything of large scope done in modern America, the realization of Nashville SC’s dream is a triumph for all involved.

Nashville’s eight-game road trek to start the season ends with the home opener against the Philadelphia Union. They’ll open a building full to the brim with fans in blue and gold. The club announced on Wednesday that it had sold 20,000 season tickets for this year, a remarkable number that puts it among the highest performing teams in the league.

The city of Nashville is very excited to support Nashville SC when it moves into its proper home. And why wouldn’t it be? This is not an expansion team riding an initial wave of enthusiasm and little else. Nor is it an older club without much recent success counting on a boost from a new venue. Instead, Nashville SC is a good soccer team moving its operations into a building that should only increase its home-field advantage.

Plenty of words have already been spilled on Nashville’s early success, but a few more couldn’t hurt. The club made a smart hire at general manager (Mike Jacobs), elevated a coach (Gary Smith) with MLS success on his resume, and didn’t worry about playing “pretty” soccer. That’s an admittedly reductive way to describe a significant achievement.

Banking on the idea that sports fans in Nashville would gravitate towards a winner regardless of the brand of soccer on the field, the club built an unflashy roster rich in MLS experience in key areas. It smartly leveraged the tools available to expansion teams, namely extra allocation money and the top spot in the allocation order, to take a strong first step into its MLS existence.

2020 was a strange, COVID-shortened season, but that shouldn’t take away from Nashville’s accomplishment of making the playoffs as an expansion team. The club has only gotten better since and rates among the favorites to challenge for the Western Conference title in 2022. Good short-term planning turned Nashville into a top-tier MLS team over the longer term.

On May 1, they join a select group of MLS clubs to open a new stadium with a contending team. This is not usually the way of things. Expansion teams don’t typically thrive quickly enough to move into new venues with big expectations. The timing doesn’t always work for established clubs entering a new stadium era, either.

Austin FC debuted a new stadium in its first season and found the going tough despite the classy accommodations and incredible home atmosphere. The club was only able to give its fans a small taste of success at home while mostly trading on the initial wave of expansion enthusiasm and the promise of better days to come.

It was worse for FC Cincinnati. After a few years playing in a temporary venue while the club built a soccer-specific home, Cincinnati opened TQL Stadium last year. Excitement about the stadium was the only thing worth highlighting in what was otherwise a lost season. The product on the field was the worst in MLS. The club finished last in the combined league standings for the third time in its three MLS campaigns.

Success in MLS can be fleeting. The combination of new stadium excitement and playoff ambition falls apart quickly in a league as fickle as MLS. The Columbus Crew knows all about that phenomenon. It took some of the fun out of a 2021 season that was supposed to be a massive step forward for an original MLS franchise.

In July of 2021, the Crew opened up Lower.com Field, a state-of-the-art building that replaced the league’s original soccer-specific stadium. Fresh off the high of the club’s second MLS Cup title in 2020, the move into a modern stadium was a reason to celebrate. Lower.com Field’s existence felt all the more remarkable because of the threat of relocation that dominated the Crew’s story just a few years before.

What Lower.com Field didn’t get was a winner. The fates conspired against the Crew, and the team missed the playoffs in 2021. There’s no reason to think that the club can’t bounce back and become a contender again in 2022, but in the year of its new stadium opening, the Crew struggled.

Nashville doesn’t appear set up for a new stadium letdown. If they can make a run into the playoffs and push for the title, the building will likely play a role in their success. Nashville hopes to be much more like the 2019 Minnesota United team that opened Allianz Field and in the same year qualified for its first postseason, the most recent example of a team succeeding in its new building.

What United didn’t have was a track record of success before opening their permanent home. The Loons built slowly and struggled through two poor seasons before putting together a team good enough to finish fourth in the Western Conference in 2019.

In 2018, LAFC made the playoffs in its first season in its new stadium. That same year, DC United made it into the playoffs with the help of Wayne Rooney when it opened Audi Field in 2018. LAFC is a better analog for Nashville, but that club didn’t have to start life somewhere else.

Nashville has been building to this. It created a unique gameday experience in an NFL venue and will take two years of collected energy with it to GEODIS Stadium. The team is good enough to contend for a title. The fans are ready for their own stadium. Unlike so many other fan bases in the recent history of stadium openings in MLS, they should have much more to celebrate.