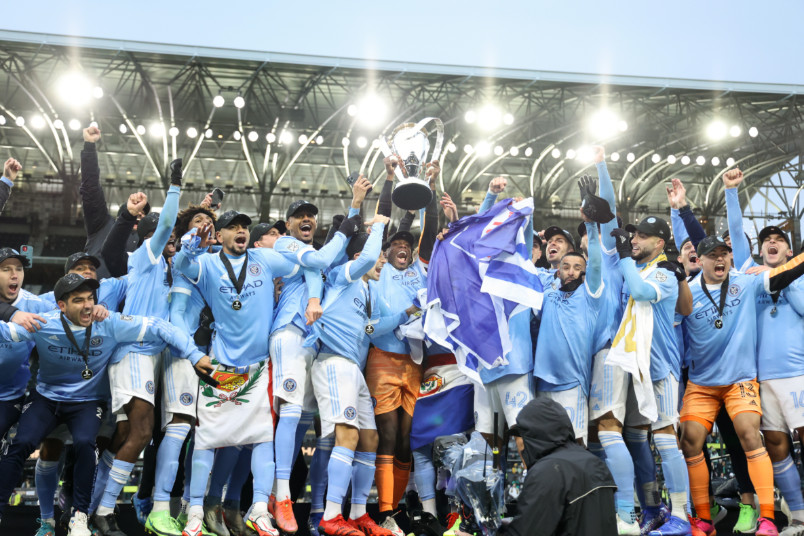 By Clemente Lisi – NEW YORK, NY (Mar 7, 2022) US Soccer Players – Only three teams have ever won back-to-back league championships. That short list is DC United in 1996 and ’97, Houston in 2006 and ’07, and the LA Galaxy in 2011 and ’12. It’s no surprise in the league that doesn’t like dynasties. It should also not be all that shocking that those three teams are among the best in MLS history. It’s both a rare feat and a daunting task for any team that comes into a new season looking to repeat.

In 2022, that challenge falls to New York City FC. The team surprised many by winning last season’s MLS Cup. That has them competing on multiple fronts right now, adding the Concacaf Champions League to the MLS schedule. Like any defending champion, NYCFC spent the winter trying to make itself stronger. This remains MLS, usually meaning that they also needed to revamp after selling a player. In New York’s case, that was James Sands now playing on loan at Rangers in the Scottish Premiership.

We already know how fragile a championship squad can turn out to be. Columbus won the 2020 MLS Cup, missing the playoffs entirely just a year later. The Crew started slow last season, picking up the pace too late to grab a postseason spot. The team finished ninth, a point out of the playoffs, and exited the Concacaf Champions League in the quarterfinal round. That’s the story NYCFC would prefer not to retell.

NYCFC embarked on its title defense on the road with a 1-0 loss on February 27 at the Galaxy. The game seemed destined to end scoreless, but a 90th-minute goal from Chicharito Hernandez changed that. Afterward, NYCFC coach Ronny Deila struck a positive tone, even using the word “positives.”

“There was a lot of positives. If we keep games even like this against the best teams we will get points,” he told reporters during the post-match news conference. “We knew that was it was going be tough. We made it very even. We just have to build on this – there was a lot of things that were positive – and I’m sure we’ll get our points.”

NYCFC followed that up this past Saturday, once again on the road. A scoreless draw against the Vancouver Whitecaps isn’t likely to stifle early criticisms. Two games are no real sample size. Still, they do give some indication of how tough it is to win games in this league. Add in the dice roll that is the playoffs, and New York’s situation can quickly become difficult. They’re in action twice this week, starting tomorrow night in the Champions League. First, they host Comunicaciones in East Hartford, once again highlighting their stadium issues. Then it’s an MLS game at Yankee Stadium on Saturday against CF Montreal.

There was no secret to NYCFC’s recent success. A mix of veterans and young players, Designated Players who clicked, relatively few injuries, and a hot run in the playoffs all contributed to the title. It’s a formula that has worked in MLS in the past but often is very hard to duplicate. Players come and go, injuries are always an issue, and a playoff run is hardly predictable.

The attack that got NYCFC the title lost its supporting players. Jesus Medina is now with CSKA Moscow, and Ismael Tajouri-Shradi left for the Galaxy. Last season’s league MVP, Taty Castellanos, is the only key member of that attack that scored 56 goals during the regular season. On defense, the team loaned out Sands with an option to buy, a key member of last season’s championship run.

NYCFC tried to restore some of that back line stability by signing Thiago Martins as a DP status. Offensively, Castellanos will need to rely on wingers Talles Magno and Santiago Rodriguez. In between games this last week, NYCFC doubled down on youth. They signed Academy product Maximo Carrizo to a Homegrown contract through 2027. Carrizo, who turned 14 on February 28, became the youngest player to sign a first team contract in league history. Carrizo’s signing is a long-term investment but again highlights the club’s focus on developing talent.

Where any of this leaves New York City is the question that dropped points will eventually answer. They not only have to show that they can score goals but that they can once again put themselves in the conversation near the top of the Eastern Conference. While New England eventually ran away with the Supporters’ Shield, NYCFC was one of the clubs that stayed in contention for long stretches of the season. That’s not easy, belaying their 4th-seed position when they made that playoff run.

Even in a quick revamp league like MLS, building a winning organization can be a long game. Fans want short-term results, of course. That creates the situation where teams push too quickly and suffer in the table accordingly. New York is supposed to already be the kind of team that will take advantage of that. They just have to show it this season.