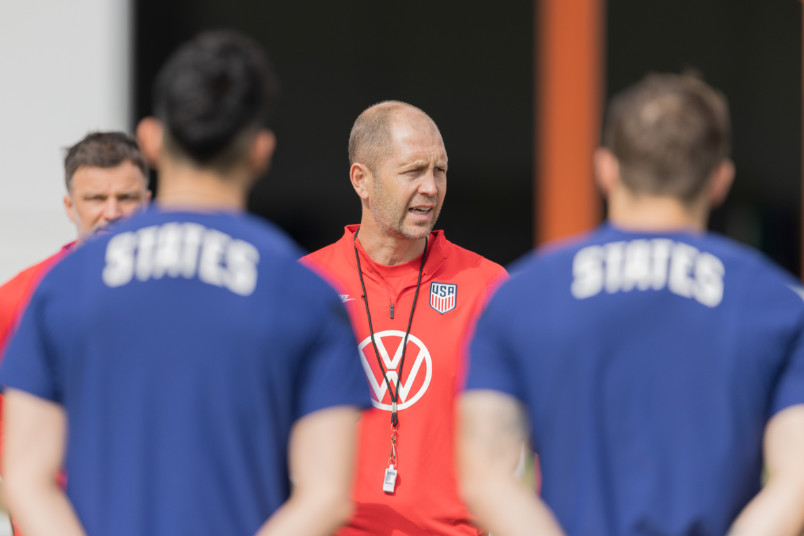 Wednesday’s soccer news starts with the USMNT making the trip to Mexico for tomorrow’s Concacaf World Cup qualifier at Estadio Azteca. Unlike the last cycle, altitude adjustments aren’t as much of the story. Instead, the focus has been on how USMNT coach Gregg Berhalter might structure his squad. He certainly has the data points after the summer of USMNT vs Mexico.

Most teams in general, and certainly national teams, settle on a starting goalkeeper. The job becomes theirs to lose, adding continuity from roster to roster. That concept has become a challenge for the United States due to injury. Zack Steffen was in goal for the Nations League final last summer against Mexico, injured midway through the second-half. Ethan Horvath did his job, stopping a last gasp penalty after 120 minutes.

A few weeks later, it was Matt Turner’s chance for heroics in the USA vs Mexico Gold Cup final. That game also went to stoppage time, with Turner credited with five saves in the shutout. All of a sudden, Berhalter had three options and two trophies. Turner was in goal for the start of World Cup qualifying, mostly keeping the job while Steffen was either unavailable due to travel issues or injured.

Now, it’s Turner that’s unavailable due to an injury. Berhalter called in Horvath, Steffen, and MLS Cup winner Sean Johnson, with Steffen the only one to see time in this qualifying cycle. He was in goal for the USMNT’s 2-1 home win over Costa Rica and the home game against Mexico. Whether or not that draws a straight line from one Mexico game to the next is the question for Berhalter and his staff.

The USMNT’s technical staff had time to think about what Weston McKennie’s absence might mean. Sergino Dest and Brenden Aaronson were surprises and both require reassessing the squad for answers. McKennie’s play has been inspired for the National Team, pulling them into shape with his passing and positioning. Dest seemed to have a clear role on the flank, controlling an obvious line of attack in defense and adding to the options when play shifted. McKennie became a game-changer, adapting to situations and making the difference.

While it’s easy to play theoretical roster building, it’s not that easy. Considering the pressure of the final three qualifiers, it becomes another opportunity for Berhalter to come up with a technical solution. His tactics have drawn criticism at times during this cycle. The January/February window was as much an exercise in creative venue selection home and away, but the tactics at Canada raised old questions. All three of the absent players represent potential answers. With a short run-up before the trip to Estadio Azteca, the USMNT technical staff gets another opportunity to show their work.

Unlike the last window, Mexico gets its crowd back after serving another ban for homophobic chanting. Add that to the altitude and simple familiarity with the biggest stadium in Concacaf, and Mexico’s home edge is real. They’re without forward Rogelio Funes Mori and midfielder Andres Guardado, requiring their own reset. Both of those are contributors in an offense that will take a lot of shots. Enough that 14 goals scored seem low for that kind of offense.

Mexico hasn’t had a breakthrough performance from its offense in this cycle. That has to be a concern for Tata Martinez, a coach that has spent a couple of windows answering criticism over player selection and tactics. Qualifying solves all of those problems, for now, the simple situation for every team entering the final Octagonal window in a position to advance to Qatar.

CBS Sports’ James Benge focuses on Christian Pulisic’s positioning for the USMNT. The LA Times’ Kevion Baxter on what could be the last Mexico vs USMNT qualifier. The Athletic’s Sam Stjeskal and Paul Tenorio put the focus on the missing players in the USMNT squad. MLSsoccer’s Chalres Boehm has Tyler Adams’s comments about playing at Mexico. ESPN’s Kyle Bonagura and Cesar Hernandez talk to former USMNT players about games at Azteca.

World Cup qualifying on ESPN Deportes: Australia vs Japan at 5am. ESPN2 has Portugal vs Turkey at 3:45pm. Fox Deportes has Paraguay vs Ecuador at 7:30pm. CBS Sports Network has Mexico vs USMNT at 10pm. Costa Rica vs Canada is on Universo at 10pm ET.