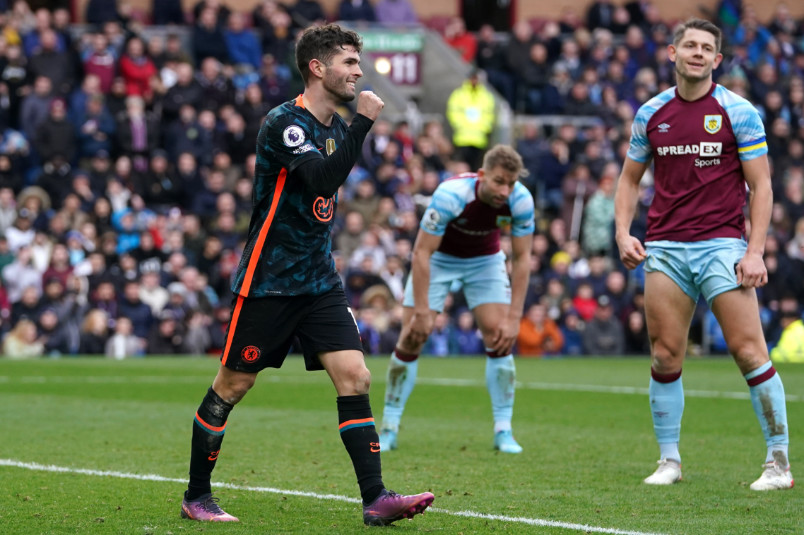 “When you arrive at Turf Moor, you know what’s waiting – physicality, direct play, headers, fighting for second balls, crosses, set pieces,” Chelsea manager Thomas Tuchel said. “We stepped up and it shows for me a lot of character which is why I’m very proud. It shows the guys have what it takes to play for Chelsea and it shows we have the environment to focus on football.”

Josh Sargent’s Norwich City lost 3-1 at Brentford. Norwich fell behind to goals in the 32nd, giving up penalties in the 52nd and 58th minutes. Teemu Pukki scored for Norwich two minutes into stoppage time. Ethan Horvath was in goal for Nottingham Forest’s 1-1 draw at Sheffield United in the Championship. Trailing from the 69th, Ryan Yates equalized for Forest five minutes into stoppage time.

Duane Holmes subbed out in the 71st minute of Huddersfield Town’s 3-0 home shutout of Peterborough. Danel Sinani scored in the 3rd with Tom Lees adding goals in the 7th and 72nd minutes. Tim Ream and Antonee Robinson’s Fulham beat Blackburn 2-0 at home. Neeskens Kebano scored in the 25th and Harry Wilson made it 2-0 in the 35th. Ream saw yellow in the 80th minute. Lynden Gooch subbed out in the 81st minute of Sunderland’s 0-0 draw at Charlton in League One.

Sebastian Soto subbed on in the 70th minute of Livingston’s 3-1 home loss to Cameron Carter-Vickers’s Celtic in the Scottish Premiership. Daizen Maeda scored for Celtic in the 17th and an own-goal doubled the lead in the 46th. James Forrest made it 3-0 in the 55th. Livingston’s Andrew Shinnie scored a minute later. Christian Ramirez’s Aberdeen list 1-0 at Rangers. Kemar Roofe scored in the 81st minute.

George Bello subbed on in the 76th minute of Arminia Bielefeld’s 1-0 home loss to Augsburg in the Bundesliga. Daniel Caligiuri scored in the 50th minute. John Brooks’s Wolfsburg shutout Union Berlin 1-0 at home. A 24th minute own-goal was the difference. Timmy Chandler subbed on in the 83rd minute of Eintracht’s 4-1 win at Hertha BSC. Ansgar Knauff scored for Eintracht in the 17th with Tuta making it 2-0 in the 48th. Jesper Lindstrom made it 3-0 in the 56th. Hertha pulled a goal back in the 61st. Rafael Santos Borre scored Eintracht’s fourth goal in the 63rd.

Julian Green subbed on in the 82nd minute of Furth’s 2-1 loss at VfL Bochum. Furth fell behind in the 35th with an own-goal leveling the score in the 64th. Bochum scored again in the 71st. A league down, Terrence Boyd scored the only goal in Kaiserlautern’s 1-0 win at Osnabruck in the 3.Liga. Boyd subbed on in the 68th and scored in the 77th.

Tanner Tessman subbed on in the 75th minute of Venezia’s 4-1 home loss to Sassuolo in Serie A. Venezia fell behind in the 2nd and gave up penalties in the 17th and 29th minutes. Thomas Henry scored for Venezia in the 34th with Sassuolo converting another penalty in the 71st. Andrija Novakovich subbed on in the 53rd minute of Frosinone’s 1-1 draw at Ascoli in Serie B. Down a goal in the 20th, Novakovich assisted on Daniel Boloca’s equalizer in the 84th minute.

Sergino Dest subbed on in the 85th minute of Barcelona’s 2-1 win at Elche in La Liga. Barcelona trailed from the 44th with Fernan Torres equalizing in the 60th. Memphis Depay converted an 84th minute penalty. Elche went a man down in the 88th. Yunus Musah subbed out in the 73rd minute of Valencia’s 3-1 home win over Granada. Goncalo Guedes scored for Valencia in the 48th and Maximiliano Gomez made it 2-0 in the 51st. Valencia gave up an own-goal in the 56th with Carlos Soler converting a penalty in the 62nd. Musah saw yellow in the 34th.

Erik Palmer-Brown’s Troyes won 2-0 at Bordeaux in Ligue 1. Going up from a 28th minute own-goal, Troyes’s Lebo Mothiba converted a penalty in the 87th. Troyes’s Youssouf Kone saw red two minutes into stoppage time. Nicholas Gioacchini subbed on in the 81st minute of Montpellier’s 2-0 loss at Nantes. The goals came in 69th and stoppage time.

Reggie Cannon’s Boavista drew 1-1 at home with Braga in the Primeira Liga. Down a goal from the 37th minute penalty, Yusupha Njie equalized in the 53rd. Jordan Pefok scored for Young Boys in their 2-2 home draw with Luzern. Pefok opened the scoring in the 8th with Felix Mambimbi doubling the lead in the 10th. Luzern scored in the 41st and 85th minutes.

Tyler Boyd’s Rizespor lost 2-1 t home to Giresunspor in the Super Lig. Joel Pohjanpalo put Rizepor up in the 14th. Giresunspor equalized from a first-half stoppage time penalty and went ahead in the 48th.

Brenden Aaronson subbed on in the 61st minute of Red Bull Salzburg’s 4-0 home win over Altach in the Austrian Bundesliga. Chukwubuike Adamu put Red Bull up in the 12th and Maximilian Wober doubled the lead in the 22nd. Lika Sucic scored in the 26th and Karim Adeyemi converted a stoppage time penalty. A league down, Ulysses Llanez subbed on in the 57th minute of St Polten’s 1-0 win at Horn. Up a man from the 57th, Kresimir Kovacevic scored a minute into stoppage time.