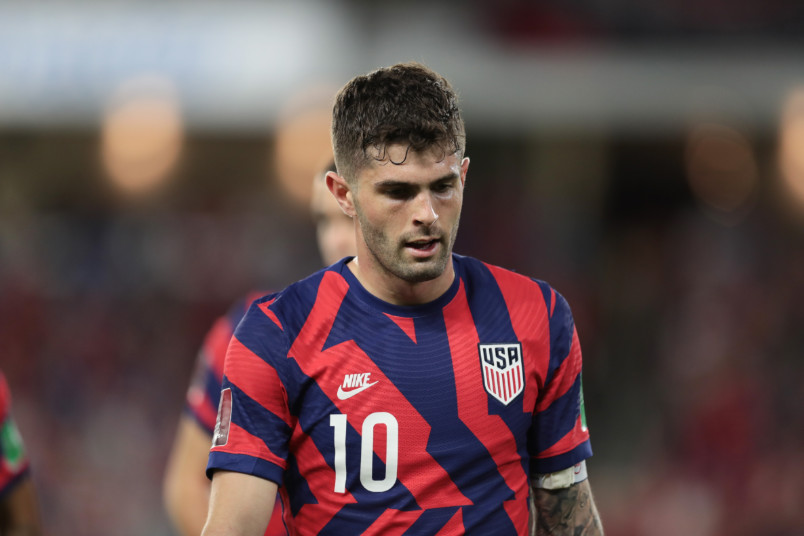 Monday’s soccer news starts with the USMNT coming as close as possible to advancing to the 2022 World Cup. The 5-1 win over Panama and Costa Rica beating El Salvador 2-1 creates a final day scenario where it would take a lopsided Costa Rica win to send the USMNT to the playoffs. Mexico is also in that equation, with the top three the same as it was when the March window opened last week. The USA is in 2nd-place tied on points with 3rd-place Mexico at 25 but leading +13 to +7 on goal difference. Costa Rica is 4th with 22 points and +3.

Against Panama, the USMNT showed it could take over a situation that required three points. A group effort from the offense saw the USA in control of the game by halftime, Christian Pulisic adding a fourth goal from a first-half stoppage time penalty. A noticeably frustrated Panama didn’t have the answer in either half, eventually spoiling the shutout in the 86th minute.

For the United States, this was another necessary proof of concept after not scoring at Mexico last week. That game resonated because the opportunities were clearly there. There’s only so many chances before that turns into a frustrating pattern. Mexico got a win at Honduras, but it was more of the same from them. 18 shots taken, three on goal, and a 1-0 shutout rather than dominance.

That’s been one of the stories of the Octagonal. Teams that press the offense have two problems. The first is the disparity between shots and putting them on goal. The second is goals. The dominant performances like we saw from Canada and the United States on Sunday remain the outliers in the final round of Concacaf World Cup qualifying.

SI’s Brian Straus with the USMNT doing what was needed at home against Panama. ESPN’s Jeff Carlisle focuses on USMNT coach Gregg Berhalter’s decisions. The Athletic’s Paul Tenorio on what the United States made work. The Washington Post’s Steven Goff’s match report from Orlando. Getting CONCACAFed’s John Arnold takes a broader look at the region with one game remaining.

Moving to MLS, there were three games on the schedule during the international weekend. Charlotte shutout Cincinnati 2-0 at home with Karol Swiderski scoring in the 6th and 55th minutes. Goalkeeper Kristijan Kahlina made five saves to keep the clean sheet.

“I believe in the game there are sequences of good and bad luck,” Charlotte coach Miguel Ramirez said. “But they had chances to score, and today they couldn’t, to be fair. But of course, we keep working on how to be more efficient in the defending and concede fewer goals. In preseason, we spent so many training sessions on the attacking organization, but now that they have the tools we can work more on the defensive organization.”

“I’m always interested when a team gets into a situation where we were,” Sporting KC coach Peter Vermes said. “We had a lot of injuries and how the reaction of the guys winds up being and how some people panic and then others keep their head. Just because you’re losing doesn’t mean you’re lost. We weren’t lost at all. We were just trying to get a routine and trying to get a bunch of guys still indoctrinated that still need time.”

Sunday saw Portland and Orlando City draw 1-1 at Providence Park. Junior Orso scored for City in the 52nd, with Portland going a man down with a red card to Jose Van Rankin in the 76th. Cristhian Paredes converted a Timbers penalty in the 76th.