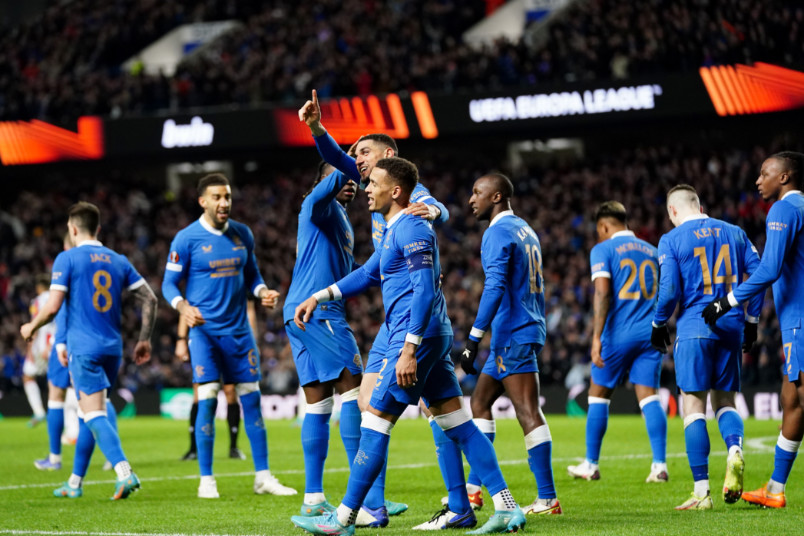 Friday’s soccer news starts with USMNT players in the Europa League round of 16 first-legs. James Sands subbed on in the 75th minute of Rangers’ 3-0 home win over Red Star Belgrade. James Tavernier converted an 11th minute penalty and Alfredo Morales doubled the lead in the 15th. Leon Balogun finished off the first-leg goals in the 51st minute.

“Despite the 3-0 win today, it’s pretty clear the quality that they have,” Sands said. “They’re a very dangerous team that we’re going to have to be up for in the second leg. It will be a big test, but I’m sure that we will be up for it.”

“This is the Europa League and the rivals are here by their merits,” Barcelona coach Xavi said. “It’s a tough, quality competition and we need to be humble in our work. Right now it’s all square – we’ve not lost everything thanks to this result, nor have we put ourselves in a winning position. We go to Istanbul needing to win to go through, just like when we went to Naples.”

In the Europa Conference League round of 16 first-legs, Konrad De La Fuente was on the bench for Marseille’s 2-1 home win over FC Basel. Arkadiusz Milik converted a Marseille penalty in the 19th, scoring again in the 68th minute. Basel pulled a goal back in the 79th.

Richy Ledezma wasn’t in the squad for PSV’s 4-4 home draw with FC Copenhagen. Falling behind in the 6th, Cody Gakpo equalized for PSV in the 21st. Copenhagen retook the lead a minute later and went up 3-1 in the 43rd minute. Ritsu Doan pulled a goal back for PSV in the 50th and Gakbo equalized in the 70th. Copenhagen was back in front from a 78th minute goal, but Eran Zahavi leveled the score in the 85th.

Josh Sargent subbed out in the 84th minute of Norwich City’s 3-1 home loss to Chelsea. Trevoh Chalobah opened the scoring for Chelsea in the 3rd minute and Mason Mount doubled the lead in the 14th. Norwich’s Teemu Pukki converted a 69th minute penalty, but Chelsea’s Kai Havertz finished off the goals in the 90th. Christian Pulisic wasn’t in the squad for Chelsea. The club learned earlier that day it would be operating under a government license that doesn’t allow them to sell tickets, merchandise, or spend more than just over $26k per away game.

“As long as we have a fixture and as long as we have enough shirts and as long as the bus is full of fuel we will be there,” Chelsea manager Thomas Tuchel said about playing under financial restrictions. “We will be competitive and we will be there in the best spirit because we love the game. This is what everyone can be sure of and this is what we demand of ourselves. When it’s a big storm you dig in and you hold together and hold strong and get through it.”

CNN’s Amy Woodyatt and Niamh Kennedy explain how the British government is allowing Chelsea to operate after their owner Roman Abramovich was placed under sanctions. The Guardian’s Sean Ingle works through what Chelsea faces. DW on the future of the club. Goal’s Andrew Steel with Gio Reyna back for Borussia Dortmund. The Miami Herald’s Joey Flechas reports on the latest with Inter Miami’s stadium plan.

Saturday has the Premier League on USA: Brentford vs Burnley at 10am. Ligue 1 on beIN Sport: Montpellier vs Nice at 11am and Troyes vs Nantes at 3pm. Primeira Liga on GolTV: Arouca vs Pacos de Ferreira at 1pm.

MLS on Univision: Inter Miami vs LAFC at 1:30pm. Fox has Seattle vs LA Galaxy at 3:30pm. Liga MX on Univision: Leon vs Tigres at 6pm and Cruz Azul vs UNAM Pumas at 8pm. Liga MX on FS2: Monterrey vs Mazatlan at 8pm. Telemundo has Chivas vs Club America at 10pm.

Sunday has the Premier League on USA: West Ham vs Aston Villa at 10am and Arsenal vs Leicester City at 12:30pm.

Ligue 1 on beIN Sport: PSG vs Bordeaux at 8am, Strasbourg vs Monaco at 10pm, Lon vs Rennes at 12pm, and Brest vs Marseille at 3:45pm. La Liga on ESPN Deportes: Rayo Vallecano vs Sevilla at 9am. Primeira Liga on GolTV: Porto vs Tondela at 2pm and Braga vs Gil Vicente at 4:30pm.

Liga MX on Univision: Toluca vs Pachuca at 1pm. San Luis vs Puebla is on TUDN at 6:30pm. FS2 has Santos Laguna vs Tijuana at 9pm. MLS on FS1: Atlanta vs Charlotte at 4:30pm. USL Championship on ESPN2: Birmingham vs Tampa Bay at 5pm.

Monday has the Super Lig on beIN Sport: Galatasaray vs Besiktas at 1pm. Premier League on USA: Crystal Palace vs Manchester City at 4pm. Primeira Liga on GolTV: Moreirense vs Sporting at 4:15pm. All Times Eastern