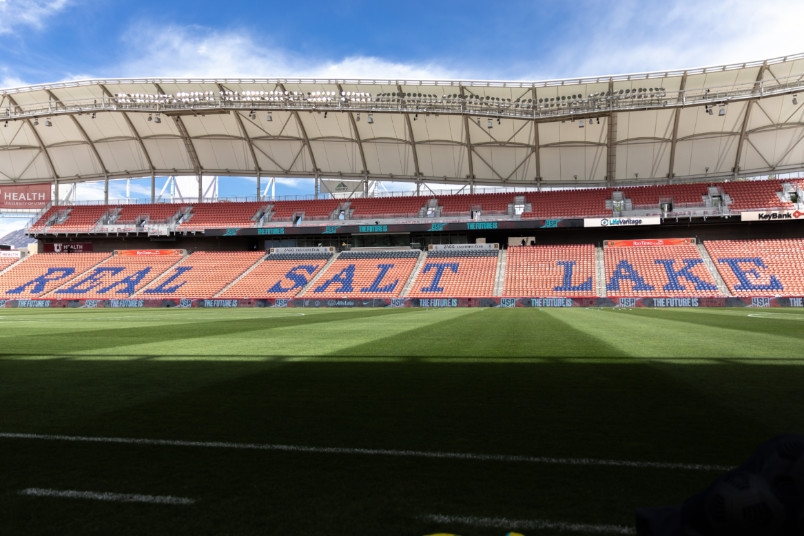 By Charles Boehm – WASHINGTON, DC (Mar 3, 2022) US Soccer Players – “Rivalry.” You don’t have to be an MLS obsessive to know how heavily the word gets used around the league, to the point of inflicting fatigue on even the most dedicated fans. What started as an attempt to cultivate additional meaning in a young entity with shallow roots eventually became a central pillar to how MLS promotes and perceives itself, sometimes to comical excess. Still, in a constantly-growing league now at 28 clubs with even more on the way, some match-ups just carry an edge that others can’t equal.

It seems fair to apply that to Real Salt Lake’s home opener on Saturday. The Utah club will host the Seattle Sounders at Rio Tinto Stadium for their first home game under the new ownership group led by David Blitzer and Ryan Smith, with a sellout crowd expected. While RSL’s formal, official rivals are their “Rocky Mountain Cup” antagonists across the border in Colorado, meetings with Seattle have taken on additional dimensions lately.

They’ve dueled in some important games over the years, most recently the first round of last year’s playoffs. That’s where bottom-seeded Salt Lake upset the heavily-favored Sounders at Lumen Field without so much as a single shot on goal, eventually edging a penalty-kick shootout as young goalkeeper David Ochoa played both the heel and star roles. That result had additional meaning since Real Salt Lake’s coach earlier that season was now with Seattle.

At the end of August, Juarez made the rare move of leaving as Real salt Lake’s head coach to become an assistant at Seattle. Over the winter Salt Lake’s playmaker and lone Designated Player Albert Rusnak made the same switch, using the expanding free-agency system to become one of the few DPs to make such a move.

As a small-market club, Real Salt Lake’s embrace of the plucky upstart ethos shows they are quite conscious of the implications of that. Coining “the team is the star” motto, leaning into an academy-centered player-development model, building a national scouting apparatus and regional homegrown-rights territory all underlined that particular relationship to the rest of the league. Interim turned head coach Pablo Mastroeni used that as an advantage when he led the team into last season’s playoffs.

As it stands, both teams seem unwilling to play up any lingering issues. Seattle coach Brian Schmetzer called Juarez “an old soul” who’s “been around the block” and can handle any negativity in his direction. Players on both sides elected not to stir the pot in media sessions, which might have been different were Ochoa not currently sidelined by injury. All that has limits, though.

“We are still on a daily basis in touch with Albert, sometimes with Freddy. Craig Waibel is there. Those friendships gives you maybe more motivation to be better on the field, and to deliver more,” Salt Lake standout Damir Kreilach, named captain after Rusnak’s exit, told USSoccerPlayers.com this week. “Of course it’s another rivalry game, and just because of that, we are happy to have so many fans at the stadium. And our priority number one is to keep three points at home…. We all know what quality Seattle has, as a group and as individuals.”

It’s easy to imagine the schedule makers cracking a smile as they arranged Seattle as 2022’s first visitor to Rio Tinto. In a league with all too many matches still light on the optimal intensity, this one should take it as a given. The Sounders arrive after getting stunned at home by Nashville SC in their league opener last week. Perhaps a bit distracted by their ongoing Concacaf Champions League campaign, Salt Lake might be catching them at an opportune moment.

“It’s a place where I’ve been for five years. So it’s a familiar place for me,” said Rusnak this week when asked about his impending return. “I know all about the possibility of playing a snow game and then the altitude and all those factors so, yeah, it’s familiar for me. But for the rest of the guys, it’s another away game and so is for me. We’re going there right now and we had a disappointing start to the season…. I’m expecting a tough game, but we definitely have to perform better than we did against Nashville.”

RSL has been strikingly dominant in this fixture over the years. They’re 10-1-3 all-time at home against Seattle, with a +15 goal differential over that history. The Sounders have to go all the way back to a 2012 playoff series to find their last victory on the Wasatch Front. Whether that run continues or not, it’s encouraging to see a league match so laden with meaning in the second week of the 2022 MLS season.