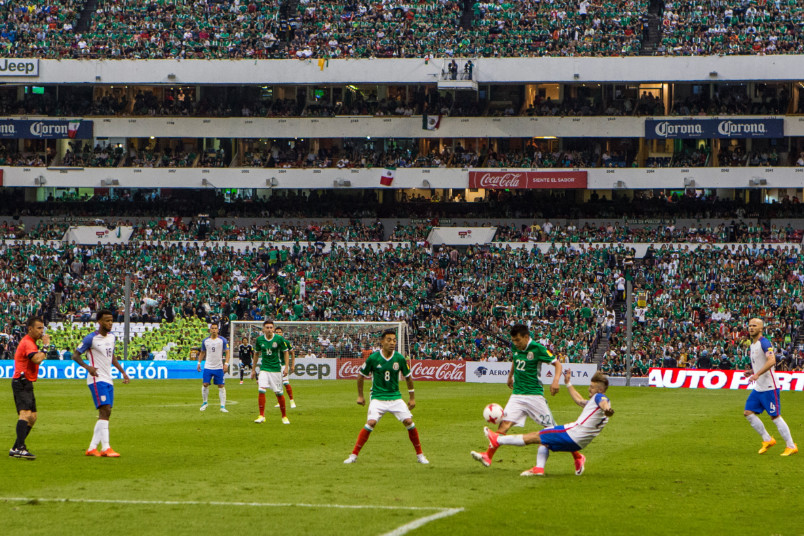 By Clemente Lisi – NEW YORK, NY (Mar 21, 2022) US Soccer Players – It’s one of the biggest National Team rivalries on the planet. It’s a game played in adverse conditions on both sides of the border. It’s also one that the United States has dominated most recently, which should add even more pressure to its rivalry with Mexico.

The legendary Estadio Azteca will host another meeting of the United States and Mexico on Thursday. The 7,200-foot altitude, searing heat, and the atmosphere created by the fans have made the venue an intimidating place for decades. The World Cup Qualifying game between Mexico and the US is the latest chapter in a rivalry that stretches back to the 1930s.

While Mexico holds an all-time record of 36-15-22, the United States has dominated this rivalry over the past year. Last summer, the Americans defeated Mexico in the Concacaf Nations League and Gold Cup finals to capture two trophies. With both teams now looking up at Canada at the top of the Octagonal standings, World Cup qualifying hasn’t been simple.

The massive bowl that is the Azteca isn’t the intimidating place it once was. Since it opened in 1966, Mexico didn’t lose a match at the 100,000-seat venue until 2001. That was a 2-1 defeat against Costa Rica in a World Cup Qualifier.

It’s been difficult this century. The US has been able to snag a point at the Azteca in both the 2014 and ’18 World Cup Qualifying cycles. In 2014, Mexico went 1-3-1 at the Azteca during Qualifying, posting draws against the US, Jamaica and Costa Rica. El Tri lost 2-1 to Honduras during that Hexagonal.

The USMNT has never won a qualifier at the Azteca, but it’s no longer considered the place where Mexico almost always picks up three points. The intimidation factor and the altitude are certainly still in play, but it requires Mexico to take full advantage. For USMNT players, a game at the Azteca is part of an initiation process for what it’s like to play the biggest game in Concacaf. At the same time, fatigue increases as a result of the altitude.

“It doesn’t allow the US to bring the kind of game they typically play to their opponent,” former US manager Bruce Arena told The New York Times in 2009. “That’s the challenge.”

The US recorded a 1-1 draw the last time it faced Mexico at the Azteca during 2018 World Cup Qualifying. A stunning goal by midfielder Michael Bradley after just six minutes put the US ahead with a right-footed chip from 40 yards out to beat goalkeeper Guillermo Ochoa.

“Here you know that if you catch a ball right, that with the thin air the ball’s going to really fly,” Bradley told reporters after the game.

Mexico tied the score through Carlos Vela in the 23rd minute on a counterattack that beat goalkeeper Brad Guzan to the near post. Despite giving up a goal, the Americans played a tough game to emerge with a point.

While a win this week isn’t necessarily vital, it would be a stunning accomplishment. After 11 games played in the Octagonal, the US is currently in 2nd-place, while Mexico is 3rd due to goal differential. The top three teams earn automatic qualification to Qatar 2022, while the fourth-place team will have to contest an intercontinental playoff this June.

The game on March 27 in Orlando against Panama, three days after the Mexico game, is the one where the Americans could clinch a spot in Qatar. The US closes out this window on March 30 on the road in San Jose versus Costa Rica. The team needs at least five points over the next three games. For Berhalter, that means considering squad rotation and fatigue.

As for the upcoming Mexico game, the US will be without midfielder Weston McKennie and winger Sergino Dest due to injury. Gio Reyna returns to the squad after recovering from an injury that has kept him out since the September window. Berhalter has called up 27 players for this camp, limited to 23 for his game-day rosters.