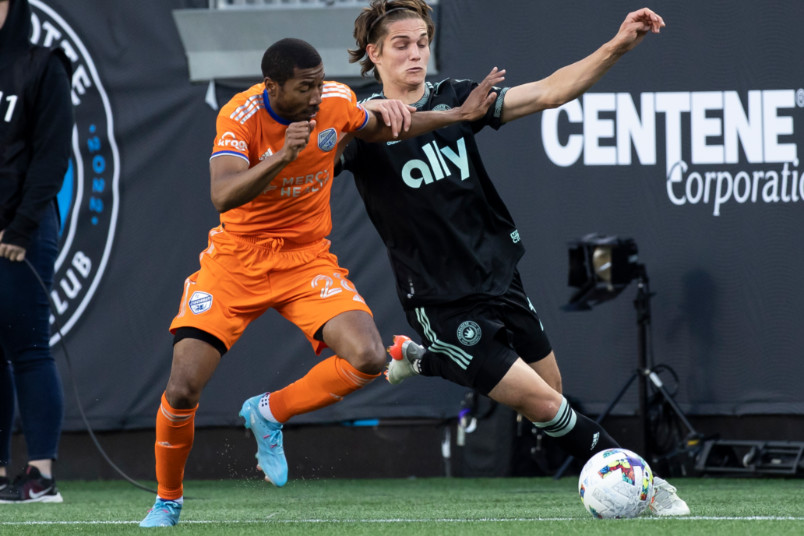 By Jason Davis – WASHINGTON, DC (Apr 8, 2022) US Soccer Players – New teams need players. It’s a statement as reductive as it is obvious. If you’re building a new soccer team from scratch, the players for your new team have to come from somewhere.

You can, of course, sign veteran players domestic and foreign, per the rules of your league. In Major League Soccer, those rules are myriad and restrictive. Trades are also part of the process in MLS, especially since the league gives new teams extra tools with which to get started. Additional allocation funds are useful when you’re building from the ground up.

The league even provides the right to grab players from other teams for free through the Expansion Draft. Those players can either be added to your roster or, if you’re savvy enough, flipped for other assets. Many an MLS expansion draft pick never suited up for the expansion team that selected him.

And then there’s the SuperDraft. Once the league’s primary provider of new young talent, the amateur draft has morphed into a place to mine for diamonds in the rough or take flyers on gifted players who aren’t sure things as professionals. MLS invested heavily in academies over the last decade. In the process, that incentivized clubs to sign players they had developed.

It’s not that there isn’t room for the draftee anymore. It’s that the space available to them has largely shifted from the first team to the reserve team. A new team normally doesn’t enter with a fully-formed academy. That returns the emphasis on the SuperDraft in their early years.

One MLS rookie is playing a crucial role for the league’s newest team in 2022. A handful of others are doing their alma maters proud by earning minutes in the first months of the season. These players stand out as reminders that college soccer continues to produce top talent. A little due diligence and a willingness to play the draft pick market can land you a player ready to contribute immediately.

Ben Bender is the latest in a long line of impact players who emerged from Sasho Cirovski’s program at the University of Maryland. The 21-year-old is earning his stripes as a key part of Miguel Angel Ramirez’s midfield with Charlotte FC.

It works in Bender’s favor that Charlotte’s status as an expansion outfit means expectations there are reasonable. Whatever pressure the number one overall draft pick would get is mitigated by the understanding that first-year teams aren’t normally contenders. Charlotte can gamble on giving Bender minutes, and Bender can thrive in an environment measuring progress in steps, not leaps.

Part of Charlotte’s moderately successful start is the play of Bender. He scored in the club’s first-ever win over New England on March 19 and is tied for second in the league with three assists through six games. Not bad for a rookie in a league where that term is mostly an anachronism.

The evolution of Bender’s time on the field points to his having a major role in Charlotte, at least for the opening portion of the season. Following two substitute appearances in the club’s first two matches, Bender has started each of Charlotte’s last four games. Ramirez’s upbeat attitude about the play of his youngest players, including Bender and 20-year-old Chris Hegardt, a Sounders homegrown payer acquired via trade, suggests the Charlotte coach will stick with the new professionals.

As a second-year club, Austin still needs players to fill roles up and down the roster. Perhaps initially identified as depth, Keller walked into starting lineup at the start of the season, playing 64 minutes in a 5-0 season-opening win over FC Cinncinati and 53 minutes in a 5-1 win over Inter Miami in Week 2.

Keller has since been pushed to the bench by 30-year-old winter signing Ruben Gabrielsen. Always the expected starter next to Julio Cascante, Gabrielsen has played the full 90 minutes in each of Austin’s last three games.

Head coach Josh Wolff already knows Keller is an option. After two strong performances in his first two games as a professional, Keller can be trusted should the need arise. For the time being, Keller will be a young player learning his trade behind veteran center backs for an improving club. His destiny remains with the first team, not somewhere else in the club’s coalescing developmental plan.

There are plenty of former college players in the initial stages of their MLS careers. It’s just only a few of them arrived through the draft. Bender, Keller, and a few others are out to show in 2022 that those players are still valuable in the ever-changing landscape of MLS rosters.