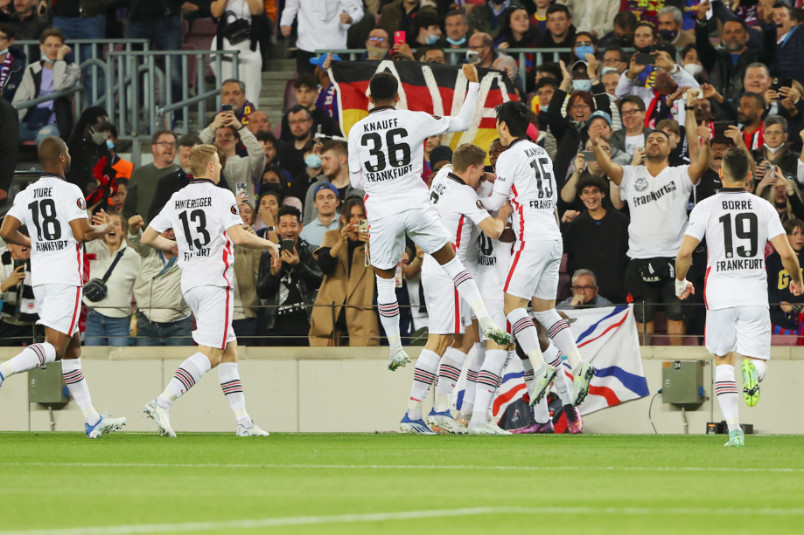 Friday’s soccer news starts in the Europa League quarterfinals second-legs. Timmy Chandler subbed on nine minutes into stoppage time for Eintracht’s 3-2 win at Barcelona, advancing to the Europa League semifinals 4-3 on aggregate. Sergino Dest subbed on for Barca in the 62nd. Filip Kostic converted a 4th minute Eintracht penalty with Rafael Borre adding a goal in the 36th. Kostic scored Eintracht’s third goal in the 67th minute. Sergio Busquets pulled a goal back for Barcelona a minute into stoppage time. Eintracht’s Obite Ndicka saw red ten minutes into stoppage time with Memphis Depay converting the penalty a minute later. Eintracht advances to play West Ham United in the semifinals on April 28 and May 5.

“Huge credit to the players for what they did here,” Eintracht coach Oliver Glasner said. “They did everything perfectly for 85 minutes. We had a game plan with our intensity, our power. We let them have the ball where we didn’t feel they could cause problems. The players achieved something that hardly ever happens anywhere in the world. We celebrated this great victory as one with the fans. Many thanks to the players and supporters. It leaves a mark on your heart.”

Tyler Adams subbed on in the 73rd minute of RB Leipzig’s 2-0 win at Atalanta, advancing 3-1 on aggregate. Christopher Nkunku scored in the 18th and converted an 87th minute penalty. Leipzig will play Rangers in the semifinals.

“Ibrox is a special stadium for any footballer,” RB Leipzig coach Domenico Todesco said. “The atmosphere is so special. When you get into a semi-final, you always want to go one step further and get to the final, but both sides will have that exact aim. They’re a really good team; we’ve all seen that over the course of this competition. They knocked Borussia Dortmund out over two legs, and when they can knock out teams of that calibre, you get a sense of the quality Rangers have.”

James Sands was on the bench for Rangers in their 3-1 home win over Braga, advancing 3-2 on aggregate in extra time. James Tavernier scored for Rangers in the 2nd. Braga went a man down in the 42nd with Tavernier converting a Rangers penalty in the 44th. Braga sent the game to extra time through a David Carmo goal in the 83rd. Kemar Roofe scored Rangers’ winner in the 101st minute with Braga seeing red again in the 105th.

“To reach the last four in Europe is a major achievement for everyone and we worked hard for it in the group stages and the games after,” Rangers manager Giovanni van Bronckhorst said. “We knew a 1-0 loss in Braga wasn’t a bad result and we started the game really well, we could have been 2-0 up. We applied a lot of pressure in the first half and against ten and nine men we could have played better.”

Konrad de la Fuente missed Marseille’s 1-0 win at PAOK to advance 3-1 on aggregate in the Europa Conference league quarterfinals. Dimitri Payet scored in the 34th minute. Cole Bassett wasn’t in the squad for Feyenoord’s 3-1 win at Slavia Prague, advancing 6-4 on aggregate. Cyril Dessers scored for Feyenoord in the 2nd with Slavia Prague equalizing in the 14th. Dessers scored again in the 59th and Luis Sinisterra adding a goal in the 78th. Slavia Prague saw red in stoppage time. Feyenoord plays Marseille in the semifinals on April 28 and May 5.

Richy Ledezma was on the bench for PSV’s 2-1 loss at Leicester City, exiting 2-1 on aggregate. Eran Zahavi scored for PSV in the 27th with Leicester equalizing in the 77th and scoring in the 88th minute. Leicester City plays AS Roma in the other semifinal.

SI’s Brian Straus reports on MLS deciding not to hold the Leagues Cup this season. The Kansas City Star’s Sam McDowell works through Sporting KC’s season so far. The Athletic’s Jordan Campbell works through Rangers in the Europa League.

Saturday has the Premier League on USA: Spurs vs Brighton at 7:30am and Manchester United vs Norwich City at 10am. Southampton vs Arsenal is on CNBC at 10am.

Ligue 1 on beIN Sport: St Etienne vs Brest at 11am and Lille vs Lens at 3pm. Primeira Liga on GolTV: Porto vs Portimonense at 3:30pm.

MLS on Univision: San Jose vs Nashville at 3:30pm. Seattle vs Inter Miami is on FS1 at 10pm. Liga MX on TUDN: Leon vs Puebla at 6pm. Fox Deportes has Santos Laguna vs Queretaro at 8pm. On Univision: Tigres vs Toluca at 8pm and Cruz Azul vs Chivas at 10pm.

Sunday has the Premier League on USA: Newcastle vs Leicester City at 9:15am.

Ligue 1 on beIN Sport: Nice vs Lorient at 7am, Toryes vs Strasbourg at 9am, Lyon vs Bordeaux at 11am, and PSG vs Marseille at 2:45pm. KNVB Beker on GolTV: PSG vs Ajax at 12pm. La Liga on ESPN Deportes: Athletic vs Celta Vigo at 12:30pm. Primeira Liga on GolTV: Sporting vs Benfica at 3:30pm.

Liga MX on Univision: UNAM Pumas vs Monterrey at 1pm. MLS on ESPN: LAFC vs Sporting KC at 4pm.

Monday has the Super Lig on beIN Sport: Galatasaray vs Yeni Malatyaspor at 1:30pm. Primeira Liga on GolTV: Estoril vs Braga at 3pm. All Times Eastern