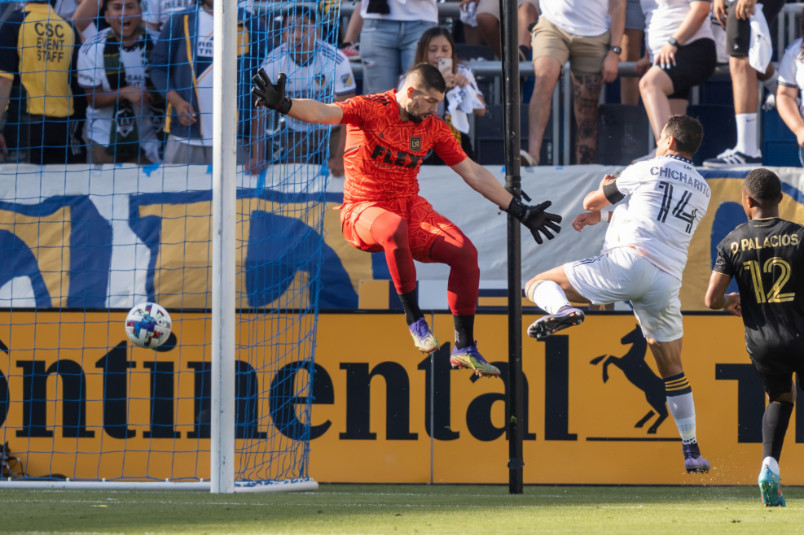 By Luis Bueno – RIVERSIDE, CA (Apr 13, 2022) US Soccer Players – When the World Cup rolls around, Major League Soccer will have a presence in the tournament. It’s not just the United States and Canada highlighting the league. Various national teams from South America, Europe, and beyond should also showcase MLS talent. The league’s clubs cast a wide net for players, especially in the new era of competing in the transfer market. Then there’s Mexico, specifically the situation with LA Galaxy star Javier “Chicharito” Hernandez.

Hernandez hasn’t been a part of the Mexican national team since 2019 and thus was not a part of Mexico’s World Cup qualifying campaign at all. There’s no expectation that situation changes as Mexico embarks on a series of friendlies in advance of the World Cup. That begins later this month when they play Guatemala in Orlando.

For a team searching for a reliable goal scorer, it’s an interesting choice from El Tri coach Gerardo “Tata” Martino. That Mexico could benefit from the return of one of their former stars is tough to argue against. An in-form Chicharito Hernandez is a difference-maker, and there’s no questioning his form.

Early in the 2022 season, Hernandez is not having problems scoring goals for the LA Galaxy. He scored in the Galaxy’s rivalry win over LAFC on the weekend, his fifth goal on the season en route to the 2-1 victory. He had a brace the week before at Portland, scoring two solid goals in that game.

Fitness does not seem to be a concern this season as it was last year. A year ago, Hernandez was limited to 21 games due to injury. Even without playing the entire season, he still scored 17 goals. In his past 26 MLS games, Hernandez has found the back of the net 22 times.

Say whatever you want about the relative quality of MLS, but previous El Tri coaches have had no issue calling in players. In 1998, the national team featured Jorge Campos (then with the Chicago Fire) and in 2006, Claudio Suarez (Chivas USA) competed for Mexico at the World Cup. Suarez was particularly interesting given that he had fallen out of favor with the national team prior to that, had been left off the 2002 roster, and had played his way back on while in Major League Soccer.

In every other World Cup, Mexico has featured at least one player who had played in MLS and had since left the league: Luis Hernandez (2002), Cuauhtemoc Blanco (2010), Rafael Marquez (2014 and 2018), and Carlos Salcedo (2018). MLS was never an issue before, and it’s hard to imagine that it suddenly became one.

Hernandez’s predecessor with the Galaxy went through a similar situation. Zlatan Ibrahimovic left the Galaxy after the 2018 season. He moved to AC Milan, showing the type of skill that made him impossible to ignore when Sweden faced a must-win scenario. Zlatan was back for his country against Poland in an ultimately failed attempt to qualify for this year’s World Cup. The criticism after the match was not whether Ibrahimovic should have played at all but that he wasn’t on the field for longer.

For some reason, it’s worth the reminder that Hernandez is the all-time leading scorer for Mexico with 52 goals. That includes a sensational goal in a group-stage win against France in the 2010 World Cup. He followed that with a jaw-dropping too-little-too-late strike in a loss to Argentina in the Round of 16.

Mexico goal rate in the recently-completed qualifying campaign was less than desirable. In six games played in 2022, they scored six times. Overall, El Tri scored 17 goals, less than the two other teams who qualified directly – Canada (who scored the most with 23) and the US (21). Certainly, Mexico features some talent up top. Raul Jimenez, Hirving “Chuky” Lozano, and Jesus “Tecatito” Corona will shoulder the scoring load. Adding Chicharito is just that, a clear addition to an offense with a tendency to stall.

There have been reports in the Mexican media regarding alleged off-the-field incidents that Martino might be holding against Hernandez, perhaps playing into the decision to leave him out. Without confirmation, those reports are just that. If it’s the reason, the team needs to make it clear. Even then, it’s worth weighing that against the need for a player like Hernandez.

At 33, Hernandez is probably no longer going to put in 90 minutes for every game at the international level. With the Galaxy, he doesn’t regularly go the full 90. What he does with his time on the field, however, is change games. He’s a sniper and a goal-poacher, the type of player that gets himself into the right positions. He’s also a veteran who will not be fazed by the enormity of the World Cup. Showing younger and less experienced players how to manage themselves on the biggest stage is a necessity. It’s one that no team can afford to overlook.

Why any team with such a clear role to fill wouldn’t use the obvious player to fill it will become a bigger question if Mexico’s offense continues to struggle. Given the available games between then and now, that may not show itself until they begin their group C schedule against Poland on November 22. Considering what we’ve seen so far this season, by that point they could be leaving out the MLS Golden Boot winner.