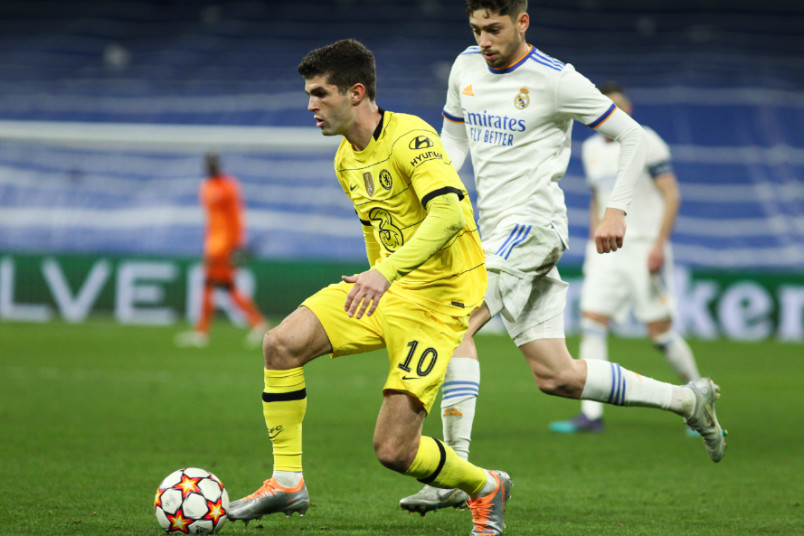 Wednesday’s soccer news starts in the Champions League quarterfinal second-legs. Christian Pulisic subbed on in the 83rd minute of Chelsea’s 3-1 regulation result at Real Madrid, sending the series into extra time tied 4-4 where Real Madrid won 5-4 on aggregate. Mason Mount opened the scoring for Chelsea at the Bernebeu in the 15th minute with Antonio Riduger doubling the lead on the night. Timo Werner made it 3-0 in the 75th, giving Chelsea the aggregate lead at 4-3. Real Madrid equalized on aggregate in the 80th minute through Rodrygo with the game finishing 3-1 to Chelsea in regulation. Karim Benzema scored for Real Madrid in the 96th minute in what was officially a 3-2 home loss on the night.

“We are very disappointed and very proud at the same time,” Chelsea manager Thomas Tuchel said. “We played a fantastic match. We deserved what we had. We scored four goals, we had big chances to score more. We were unlucky. We got beaten by pure individual quality and offensive conversion. We had two mistakes after ball wins, the most crucial moments in games against Real Madrid. We deserved to go through after this performance, but it was not meant to be. You need luck in games like this and it was not on our side.”

Real Madrid’s three-peat from 2015-16 to 2017-18 was the last time the Champions League winner made it back to the next season’s final. “We didn’t show the desire to score goals and after going 2-0 down, the team suffered mentally,” Real Madrid coach Carlos Ancelotti said. “I can’t explain any of the rest of it. The magic of this stadium helps the players to never give in.”

In the other quarterfinal, Villarreal completed their upset Bayern Munich with a 1-1 draw at the Allianz Arena to take the series 2-1 on aggregate. Trailing on the night from a 52nd minute Robert Lewandowski goal, Villarreal’s Samuel Chukwueze equalized in the 88th to send them through to the semifinals. La Liga has a chance to put three teams into the semifinals should Atletico Madrid overturn Manchester City’s 1-0 lead this afternoon. Liverpool hosts Benfica up 3-1 with the chance for two Premier League teams to advance.

Moving to the Concacaf Champions League, UNAM Pumas advanced to the final after a scoreless second-leg at Cruz Azul. UNAM Pumas led 2-1 from the opening game, playing the second-leg a man down from the 63rd minute. They await the winner of tonight’s NYCFC vs Seattle game with the Sounders up 3-1. Regardless of who wins at Red Bull Arena, the MLS club will host the second-leg of the final series due to both NYCFC and Seattle having better records in the tournament than UNAM Pumas.

Europa League on TUDN: Atalanta vs RB Leipzig at 12:45pm. UniMas has Barcelona vs Eintracht at 3pm. Lyon vs West Ham is on Galavision at 3pm. Copa Libertadores on beIN Sport: Athletico PR vs The Strongest at 6pm, Velez Sarsfield vs RB Bragantino at 8pm, and Emelec vs Deportivo Tachira at 10pm. Liga MX on TUDN: Atlas vs Mazatlan at 10pm ET.