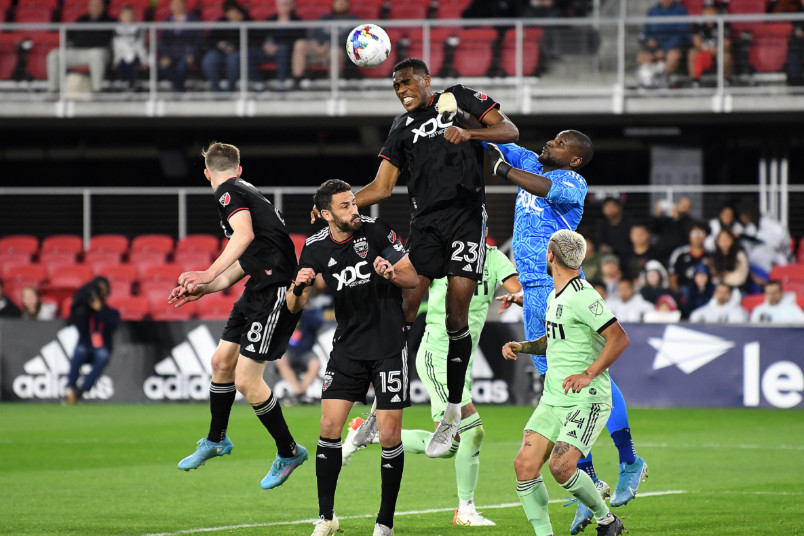 By J Hutcherson (Apr 20, 2022) US Soccer Players – While some of us might consider the four-game losing streak a regular part of an MLS season, DC United decided to view it differently. The club announced on Wednesday morning that Hernan Losada is no longer their coach, replaced with assistant coach Chad Ashton on an interim basis. Some reports have that interim basis lasting for the rest of the 2022 season.

“We’d like to thank Hernan for his time at the club and the energy he brought, as well as the attack-minded, front-foot philosophy and style of play he instilled within our club,” DC United president of soccer operations Dave Kasper said in a press statement. “We wish him great success moving forward.”

Losada will probably find it, crafting the type of attack fans generally prefer to watch. That the results haven’t come quickly enough this season is problematic. Still, as a mighty chorus of MLS fans would quickly point out, that’s part of the game in this league. Focusing on one stretch of the season is an interesting choice, with the reality of 28 teams and so many games pointing to the potential for better or worse times ahead.

It’s that balance that needs a full accounting when considering the disruptive move of a coaching change. Individual player motivation, the possibility of summer transfer moves, and the league’s various mechanisms create opportunities. They might be decidedly MLS-specific in scope, but they apply to all of the league’s teams. Playing in this league is about just that, making the decisions that should lead to results in Major League Soccer.

Austin’s late comeback at DC on Saturday was red-card dependent, but any team scoring three goals from the 80th minute is going to send a message. Whether it’s United’s inability to hold a lead or Austin’s will to take all three points, it changes things for both teams. That might have lasted as long as their next MLS games. Considering how up and down this season has been for so many clubs, takeaways are tough to judge. It might be too early to consider any game or run of games as crucial.

New England Revolution coach Bruce Arena has made that point during his club’s four-game losing streak that ended over the weekend at Charlotte.

“I think the game that we really got beat was the game against Charlotte, when we played them whenever it was, three weeks ago. The Red Bull game was just a fluke and last week is another example, we should get a point. We should have a point against Red Bull. And then the horror shows against Salt Lake here, was just, we’re playing in a blizzard. I think every game we’ve had this year has been challenging for the weatherman. It’s been absolutely a crazy start to the season. So, I can’t explain it, but I do know that there’s a lot more games ahead, so you can’t be getting too high or too low at this point.”

Eventually, what a coaching staff believes will work should. That might sound simple, but it plays out more often than not in MLS. Sure, it requires the component parts and a clear understanding of roles and tactics. That’s the separation between a bad team and a struggling team. It’s hard to look at DC United and see a noticeably bad team. That shifts the discussion to timing rather than misplaced expectations.

That DC’s first game under Ashton is hosting New England on Saturday provides some synergy only if you ignore the specifics. The Revolution has now split games with the expansion club, something that would’ve seemed ridiculous at the start of the season. Three of DC’s four consecutive losses came at Audi Field, perhaps underlining a bigger problem for the club’s leadership.

Once again, this requires considering MLS specificity. DC dropped to the bottom of the Eastern Conference in part because Inter Miami beat an under-powered Seattle. The difference between DC in 14th-place and Charlotte in 8th is all of four points, and it’s worth the reminder that United has one or two games in hand over all the teams ahead of them except for 10th-place NYCFC.

Maybe only playing six games amplifies the four losses, but an unbalanced schedule doesn’t fairly reflect the position of any team with games in hand. If anything, it should put pressure on the teams that have played seven or eight games to wonder if their position in the table is realistic.

DC already made a choice, moving forward with a long-serving coach who understands how the club’s approach has changed. As so many other teams point out with player and personnel, there’s innate value in experience in this league. That’s beneficial while figuring out what comes next.

With so many teams in the league targeting the same thing, it’s tough for any team to distinguish itself. We’ve seen that across both conferences already this season. Good suddenly looks bad, only to revert a week later. Figuring out what bad really means is difficult when supposedly struggling teams refuse to struggle. All of this complicates a basic set of expectations club-by-club. DC joins San Jose in making a move with plenty of time for further adjustments. Whether or not that’s a benefit is another question to add to the list in this strange MLS season.