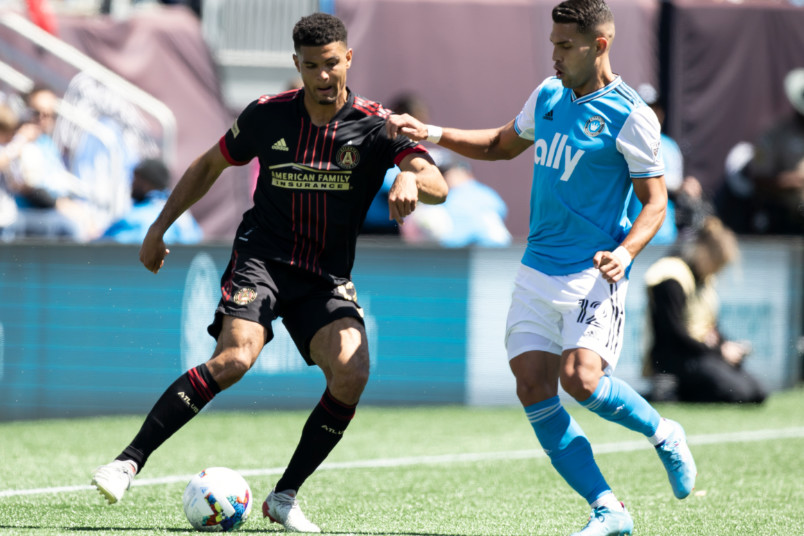 By Jason Davis – WASHINGTON, DC (Apr 13, 2022) US Soccer Players – Forget the top of the table. In Major League Soccer, the action is in the middle. It makes sense if you think about it. By design, the league gives us precisely that. It’s a long regular season that delivers the most intrigue at the playoff line.

Finishing first is fine and comes with a shiny plate if you end the season with the most points in the league. A high finish also means hosting a playoff game, no small thing in an era with knockout-style playoffs in a league that turns so strongly on home-field advantage. No one likes to leave it late, but for the neutral, there’s nothing better than a host of teams battling for a few playoff spots on the final day of the regular season.

There are MLS teams that have taken up residence n the middle. Clubs with the resources and know-how to make themselves into elite, first-place caliber teams are few and far between. Even when a club manages to climb out of the group of average clubs and lay claim to greatness, MLS has a way of pulling them back down.

Right now, the Eastern Conference table isn’t telling us very much. The Philadelphia Union made an early claim to the top spot in the conference. Through six games, Jim Curtin’s team has already displayed a knack for winning in different ways and can still be said to be at something less than full strength. They can score, and they can defend. As simple as it sounds, that’s a winning formula.

Two teams we expected to be near the top are instead nowhere near it. The defending MLS Cup champions, NYCFC, can’t seem to get into gear while navigating the the Concacaf Champions League. It might be best to reserve judgment on the champs until their continental campaign concludes.

The New England Revolution story is something different. The Revs’ Concacaf experience is already over, yet last season’s Supporters’ Shield holders simply can’t win right now. Four losses in a row have an expected contender stuck at the bottom of the Eastern Conference table amid plenty of scrutiny.

What this might mean even a few weeks from now is the kind of question the early season normally asks. It’s tough to pick favorites or outright dismiss teams, but it’s clear that mid-table might already be a fair assessment for some of them. As it stands, there’s a group of seven clubs currently separated by four points.

In that group is Chicago, with a new head coach and one of the league’s best defenses so far. If the Fire can find goals, they’ll have a shot at staying relevant. Columbus is also there, attempting to bounce back from last year’s disappointing follow-up to 2020’s MLS Cup title. There are goals in the team, and that’s a start.

Up in Canada, CF Montreal is truly middle personified. Djordje Mihailovic is a standout in the attack, but the club’s numbers show a team that will be subject to the winds of fortune all year long. Montreal ranks 14th in Expected Goals (xG) and 15th in Expected Goals Allowed (xGA) in the league, according to StatsBomb. Bob Bradley’s project in Toronto is coming along, largely on the back of young players. Any other superlatives would be premature.

The Red Bulls win on the road but drop points at home, making it impossible to assess their chances to be a contender. Add in the potential fatigue issue that comes with playing such an energetic high-pressing style. Atlanta United remains a talented team stuck in neutral. Getting a fully healthy group on the field is the latest challenge for coach Gonzalo Pineda.

Orlando is a 2nd-place team that still feels like it belongs in the middle. A quirk of the schedule means Orlando and Charlotte have played an extra game, inflating their point totals, but both belong in the conversation. Yes, even Charlotte. The expansion team is making a surprise push into the Eastern Conference middle in its first season.

Charlotte’s nine points through seven games is good enough right now. Especially since it includes taking points from clubs considered contenders. On Sunday, Charlotte struck a blow in the burgeoning not-quite-a-rivalry with Atlanta United by downing the Five Stripes 1-0 at Bank of America Stadium.

Yes, Atlanta United entered the game missing a few key players, including striker Josef Martinez, and the winning goal came from a fluky “Olympico” by Jordy Alcivar. Charlotte didn’t play Atlanta off the pitch or make a “statement” as much as it squeezed a victory out of a home match where neither team couldn’t finish their chances. Charlotte also has a win over New England that looks less impressive than it did at the time.

Then there are the deeper numbers. While noting the small sample size, it’s worth pointing out that Charlotte ranks in the bottom third of the league for Expected Goals and is better than only San Jose for Expected Goals Against. That combination suggests Miguel Ramirez’s team is overperforming.

But there’s a positive way to view Charlotte’s start. Getting points while not playing all that well is a skill clubs that want to stick in the middle need to have. Ramirez no doubt expects his team to improve in all areas as it plays more together, something that should deliver enough points that Charlotte can fairly claim its spot in the middle of the Eastern Conference. One more club vying for the playoffs makes the calculations a little more difficult for everyone else already there.