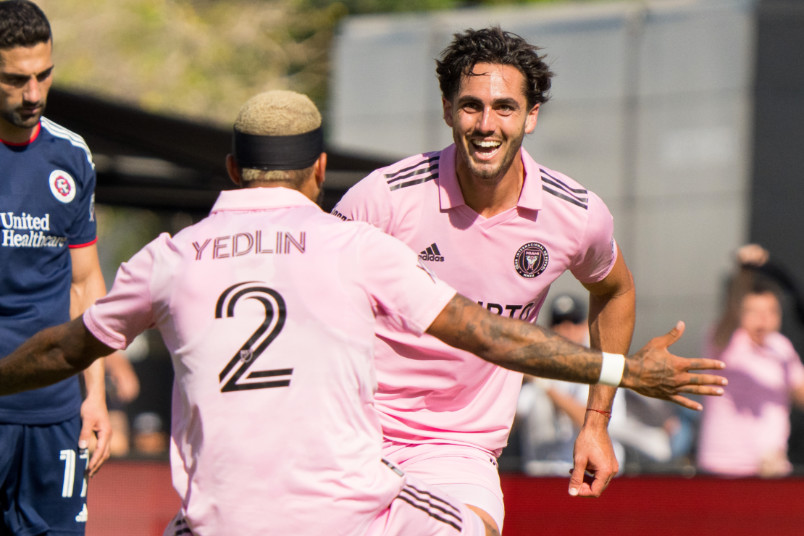 By J Hutcherson (Apr 12, 2022) US Soccer Players – There’s no magical moment over the course of an MLS season where we all agree that the numbers become real. The league of the four-game losing streak doesn’t lend itself to the points suddenly counting early or even midway through the season. Bad teams stay within easier reach than they should of a playoff spot as Decision Day looms. While this is certainly a form of parity, it’s not exactly the selling point it probably should be. MLS tends to pull most of its teams toward a mean that is just good enough.

What that is right now is an open question. Three teams are at the bottom of the Eastern Conference on four points. All of them are in specific situations that suggest things could change quickly. Again, that’s nothing out of the ordinary in Major League Soccer.

NYCFC is focused on their Champions League semifinal second-leg with Seattle on Wednesday. They didn’t play in MLS over the weekend, meaning their four points come from five games rather than six. That’s enough of a distinction to suggest that they barely belong in this discussion. Turn that missing game into a win, and instead of 12th in the table, they’re tied with 9th-place Montreal. Still, it’s the points a team has that count, and NYCFC is on a two-game MLS losing streak. Add in the Champions League, and it’s four games they’ve lost since beating Montreal 4-1 on March 12.

That’s a losing streak by any standard. Certainly, becoming the MLS representative in the Champions League final is a quick answer. Coming back from 3-1 down against Seattle would show a team capable of managing the type of scenario that normally ends with an exit. Then there are the five home games waiting for them when they shift focus to MLS.

How much of an advantage that ends up being depends on how the team responds to once again splitting home venues. They’re using Red Bull Arena for the CCL semifinal, back at Yankee Stadium for their April 17 game against Real Salt Lake. Then it’s swapping back and forth with Citi Field, where they’ll play Toronto on April 24 and Sporting Kansas City on May 7. What that five-game home stand does is put the focus on the lack of control NYCFC has over where they play.

Somehow, it’s the New England Revolution behind NYCFC in 13th-place. Last season’s record-setters are now struggling to keep up in the East, mired in a four-game losing streak that includes dropping three points at Charlotte and at Inter Miami. It’s hard to find a stat that flatters the Revolution right now, but their eight goals scored is the same as 2nd-place Orlando City. It’s also the same as 11th-place Cincinnati.

“We’ll be fine,” New England coach Bruce Arena said at a media session last week before the 3-2 loss at Inter Miami. “You know, I think we gave away two games so far this year, the Salt Lake game, and the Red Bulls game. Games where at the very least we walk off the field with a point, so I think good lessons to be learned…. These seasons go every which way, very rarely do you have identical seasons back-to-back, so we were facing adversity at the start the season, but that’s not the worst thing. I’d rather have that happen now than later.”

Inter Miami is currently the bottom club in the East on goal differential, though it’s worth pointing out that their one win of the season came against the team ahead of them. It’s probably also worth the mention that they would lose the fourth tiebreaker as well, six to eight on total goals scored.

Miami has already gone through a four-game losing streak, starting in Austin, understandable at home to LAFC, not so much at Cincinnati, and finishing the run losing at home to Houston. After picking up those three points at home over New England, they’re on the road at Seattle on Saturday. Since getting anything out of back-to-backs with the Revs and Sounders would’ve bordered on the ridiculous seven weeks ago, this is already success for Inter.

There may not be a better indication of what the table really means right now than a game between clubs at and near the bottom producing the week 6 Player of the Week winner. That would be Inter’s Leonardo Campana, scoring three and taking the award while perhaps inadvertently sending that broader message. Week-to-week, this season is very hard to judge.

It’s easy enough to point to how early it is, the Champions League impact, officiating, or teams shipping points in situations that should prove rare. Still, this may already be what happens when so many clubs are capable of producing that MLS version of parity. It creates a table that flatters some of them while not clearly reflecting the kind of soccer others are playing.