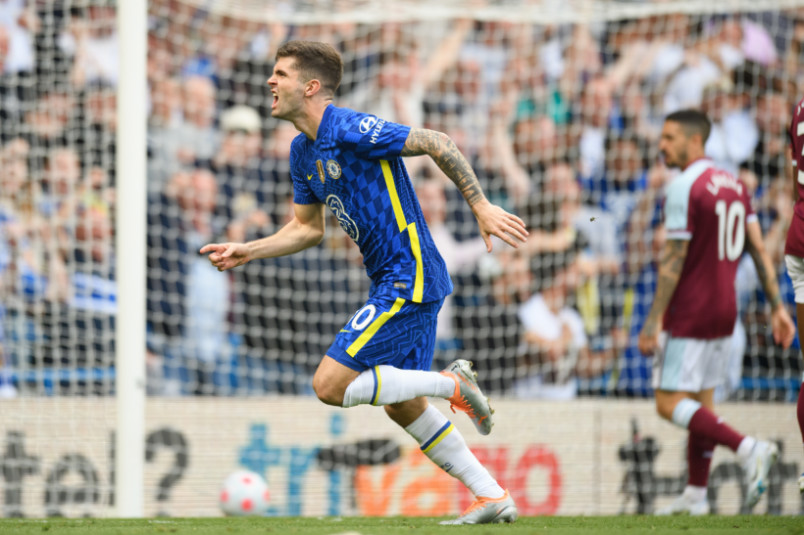 The roundup of USMNT players in Europe and Brazil starts in the Premier League. Christian Pulisic subbed on in the 76th and scored in the 90th for Chelsea in their 1-0 home win over West Ham. Chelsea failed to convert an 87th minute penalty.

“To be honest, I really think we did believe all the way to the end,” Pulisic said. “Even when that happened, I said to myself, ‘you know, we’re going to get one more chance, we’re going to create the opportunity.’ And sure enough, it came, and yeah, I’m glad we got to it.”

Tim Ream started and Antonee Robinson subbed on at halftime for Fulham’s 1-1 draw at Bournemouth in the Championship. Aleksandar Mitrovic scored for Fulham in the 56th and Bournemouth converted a penalty eight minutes into stoppage time. Robinson saw yellow in the 75th minute. Duane Holmes subbed out in the 89th minute of Huddersfield Town’s 2-1 home win over Barnsley. Jordan Rhodes put Huddersfield up in the 4th and Harry Toffolo doubled the lead in first-half stoppage time. Barnsley scored seven minutes into stoppage time.

Lynden Gooch’s Sunderland won 5-1 at home over Cambridge United in League One. Playing a man up from the 12th, Ross Stewart converted a Sunderland penalty in the 13th. Elliot John Embleton doubled the lead in the 29th. Cambridge United scored in the 30th with Embleton making it 3-1 Sunderland in the 36th. Nathan Broadhead (53rd) and Danny Batth (72nd) finished off the scoring for Sunderland.

Brenden Aaronson converted a penalty in Red Bull Salzburg’s 5-0 home win over Austria Vienna. Nmesoma Okafor scored for Red Bull in the 2nd and Karim Adeyemi doubled the lead in the 18th. Luka Sucic made it 3-0 in the 28th. Red Bull added penalties from Aaronson in the 54th and Mohamed Camara in the 85th. The win sealed the Austrian Bundesliga title.

“It’s wonderful,” Aaronson said “Last year no fans were able to be there, but this time we had a full house – fantastic! We don’t have beer showers in the US, it’s different over here, of course. I tried to stay dry, but I wasn’t quick enough. I might have a beer to drink! My family is over here, and to play in front of them, score and win the title is incredible!”

John Brooks’s Wolfsburg shutout Mainz 5-0 at home in the Bundesliga. Jonas Wind put Wolfsburg up in the 8th. Mainz saw red in the 23rd and Max Kruse converted the Wolfsburg penalty in the 24th. Kruse scored again in the 35th and Wind got a second goal in the 42nd. Kruse finished off his hat-trick in first-half stoppage time. Tyler Adams’s RB Leipzig lost 2-1 at home to Union Berlin. Yussuf Poulsen put Leipzig up in the 46th, but Union Berlin answered with goals int he 86th and 90th minutes. Adams saw yellow in stoppage time.

Julian Green’s Furth lost 4-1 at home to Bayer Leverkusen. Furth took the lead from a Jetro Willems goal in the 5th minute. Bayer responded with goals in the 8th, 18th, 58th, and 84th minutes. George Bello’s Arminia Bielefeld lost 3-1 at Cologne. Falling behind in the 3rd, an own-goal leveled the score for Arminia in the 33rd minute. Cologne added goals in the 43rd and 86th minutes.

Andrew Wooten subbed on in the 87th minute of Osnabruck’s 2-1 home loss to Waldhof in the 3.Liga. Down a goal from the 3rd, Omar Traore equalized in the 30th. Waldhof scored again in the 71st minute. Terrence Boyd’s Kaiserslautern lost 2-1 at Wehen Wiesbaden, falling behind in the 2nd minute. Kaiserslautern’s Hendrick Zuck converted a 9th minute penalty with When Wiesbaden scoring again in the 73rd minute.

Cameron Carter-Vickers’s Celtic won 2-0 at Ross County. Kyogo Furuhashi scored in the 12th minute and Jota doubled the lead in the 87th. James Sands subbed on in the 68th minute of Rangers’ 3-1 win at Motherwell in the Scottish Premiership. Rangers went up from an own-goal in the 14th and down a man with a red card to Leon Balogun in the 28th. Motherwell equalized in the 35th. A 47th minute Scott Wright goal put Rangers up in the 47th and James Tavernier finished off the scoring from the penalty spot in the 62nd.

Gianluca Busio subbed out in the 61st minute of Venezia’s 3-1 home loss to Atalanta in Serie A. Trailing 3-0 from goals in the 44th, 47th, and 63rd, Demon Crnigoj scored for Venezia in the 80th minute.

Sergino Dest subbed out at halftime of Barcelona’a 1-0 home loss to Rayo Vallecano in La Liga. Rayo Vallecano scored in the 7th minute. Yunus Musah subbed on in the 100th minute of Valencia’s penalty loss to Real Betis in the Copa del Rey final. The game finished 1-1 in regulation and stayed that way through extra time. Falling behind in the 11th minute, Hugo Duro equalized for Valencia in the 30th. Real Betis won 5-4 on penalties with Musah missing in the second round. Shaq Moore subbed on in the 89th minute of Tenerife’s 0-0 home draw with Huesca in the Segunda Division.

Luca De la Torre’s Heracles won 1-0 at Groningen in the Eredivisie. Nikolai Laursen scored in the 22nd minute. Richy Ledezma subbed on in stoppage time for PSV’s 2-1 win at Cambuur. Trailing from the 2nd minute, Eran Zahavi equalized for PSV in the 44th. Playing a man up from the 60th, Mario Gotze scored for PSV in the 65th minute.

Cole Bassett subbed on in the 84th minute of Feyenoord’s 2-1 home win over Utrecht. With Feyenoord leading from a 48th minute own-goal, Utrecht equalized in the 64th. Bassett assisted on Luis Sinesterra’s goal six minutes into stoppage time.

Sam Vines’s Royal Antwerp lost 1-0 at Club Brugge in the Belgian Pro League. Tajon Buchanan scored for Club Brugge in the 37th. Antwerp finished a man down with a red card to Abdoulaye Seck in the 90th minute. Jordan Pefok subbed out in the 83rd minute of Young Boys’ 3-1 home win over Servette. Pefok scored in the 12th and 42nd minutes with Young Boys going a man down in the 76th. Vincent Sierro made it 3-0 in the 85th. Servette scored in the 90th minute.

Tyler Boyd subbed out at halftime of Rizespor’s 6-0 loss at Fenerbahce to goals in the 9th, two first-half stoppage time penalties, the 51st, 65th, and 76th minutes.