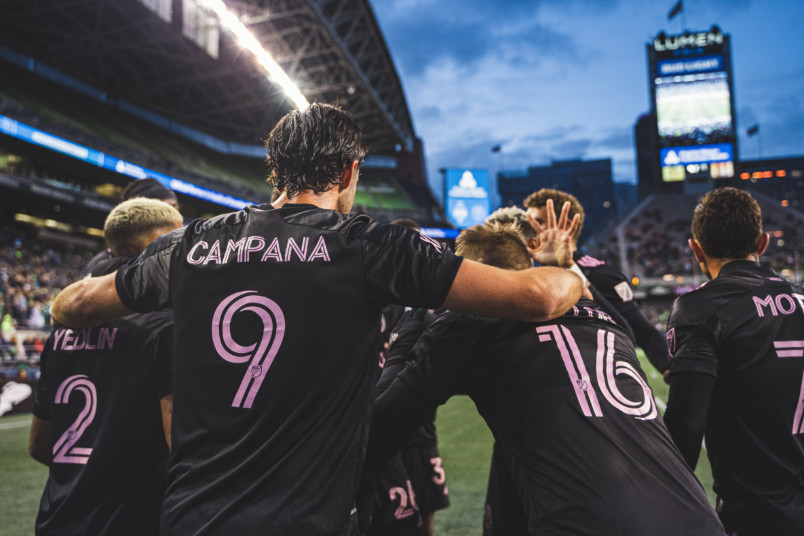 By Jason Davis – WASHINGTON, DC (Apr 20, 2022) US Soccer Players – Inter Miami didn’t have much going for it when the 2022 Major League Soccer season began. Off the field, the club was mired in a years-long struggle to push through a stadium plan on the western side of the city it nominally represents. On it, the club was reeling from an 11th-place finish in the Eastern Conference. Add to that the punishments handed down by MLS for salary budget transgressions the club committed in its first two seasons.

What was supposed to be a marquee franchise representing the most international of American cities was instead in desperate need of a revamp.

2022 is that revamp. Chris Henderson arrived from Seattle in late 2021 with a remit to fix the roster. The club brought back coach Phil Neville, but with very different expectations for his second season. The bar had to be low because of what had already happened.

Inter’s leadership, including Henderson, Beckham, and principal owner Jorge Mas, had its resolve tested through the first five weeks of the new season. Inter Miami wasn’t just bad. It was stunningly bad. A “zero” in the win column was the most obvious sign of trouble, but the numbers suggested Inter was on the way to a truly horrible season.

The intellectual understanding that a season will be bad will always clash with the emotional reaction to losses. Even teams steeling themselves for the bad times have succumbed to the need to make a change. Reports on Wednesday have DC United doing just that after a four-game MLS losing streak. Sticking with any plan becomes problematic as the losses mount.

Things are better now. Following two wins over elite clubs, Inter Miami is trending in the right direction. Win number one came at home in Fort Lauderdale. Neville’s team downed the New England Revolution 3-2 on April 9. The win came directly from the exploits of loanee Leonardo Campana, who scored three times to lift his new team.

Designated Player Gonzalo Higuain was missing with knee trouble. Though Neville has moved the 34-year-old off the front line and into a playmaker role, his absence from the attack looms large. Higuain’s quality made it difficult to imagine lowly Inter Miami knocking off the Supporters’ Shield holders without him.

Campana is an early bright spot for Miami, a player who only arrived in Florida because of the club’s need to massage the salary budget in light of the league’s heavy sanctions. Despite his status as an Ecuadorian international, Campana is a domestic player because he holds a US passport. That means he doesn’t take up a coveted international roster spot while his status as a loan player.

Miami holds an option to buy Campana from Wolverhampton of the English Premier League. It might cost the club a significant fee when the decision comes, but the groundwork the 21-year-old is laying with his play could force the club’s hand. He’s the type of player that checks several boxes for Inter Miami. In other words, Campana is the type of player Inter Miami wanted to build with from year one.

Win number two on the season was on the road in Seattle this past weekend. Though less emphatic, the three points earned at Lumen Field are more impressive for obvious reasons. Inter crossed the country and won against a team that has already booked its place in the Concacaf Champions League final. They did it in front of some of the league’s best support.

Caveats do abound for both of Inter’s wins. New England’s slow start and injury crisis sent Bruce Arena’s team into a surprising tailspin to begin 2022. The Revolution trekked to South Florida without two of its biggest scoring threats: forwards Adam Buksa and Gustavo Bou. Star goalkeeper Matt Turned was out due to injury.

In Seattle, the Sounders rotated following their trip to New Jersey to finish off NYCFC in the Champions League. Inter’s win came against a group that hardly reflected the best the home team could offer. The weakened attack failed to create good chances against what has been a poor defense.

Miami, of course, doesn’t care about the circumstances for New England and Seattle. That takes nothing away from the six points they earned. Neville is talking up the two-game streak as a launching pad for better times, as he should.

The word “identity” is getting full run at Inter. It’s a tacit admission that Inter will need healthy doses of “team spirit” and “hard work” to be competitive when the roster is still coalescing. Miami is behind the curve because so much of the group is new.

Winning in 2022 is something of a catch-22 for Inter Miami. This being MLS, there’s at least some chance the team could put together a few winning runs and end up in a playoff position. A potential “false dawn” feeling might slow down the overall project. The club doesn’t seem like the type to accept that, but there’s plenty of space between what Inter was and what they could become.

No one will begrudge Inter fans a little joy in a season that, from the beginning, was tagged as a painful year of rebuilding. Wining is never bad, even if it gilds the proverbial lily for a club that needs to keep its eye on the hard work of building a team that doesn’t just contend for a playoff spot but is capable of winning a championship.

The stats so far suggest that Inter Miami is a bottom-third team in MLS on both sides of the ball. That means the club is good enough to win some games, hang around the soft middle of the Eastern Conference, and threaten to improve into a playoff contender. MLS history is littered with bigger surprises.

Keep an eye on Miami, particularly if the Herons make the streak three with a win in Atlanta this weekend. Maybe, against all the odds, Inter Miami is capable of more than anyone, including themselves, expected this season.