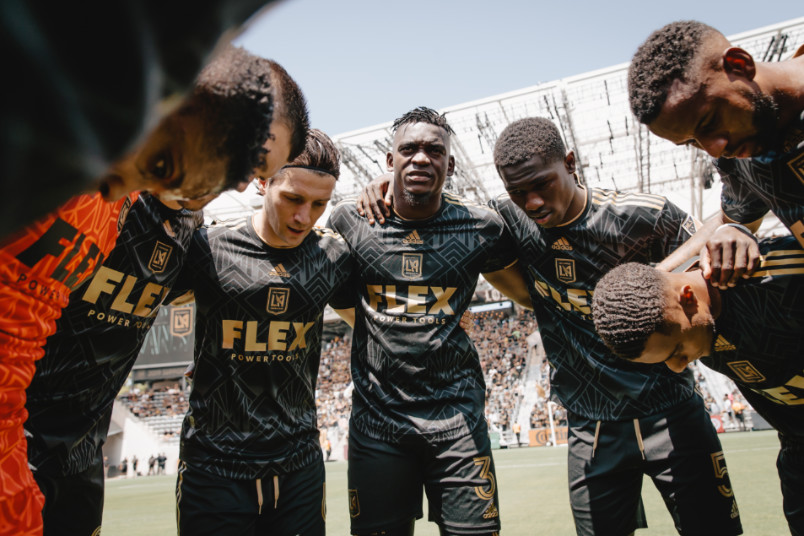 By Luis Bueno – RIVERSIDE, CA (Apr 27, 2022) US Soccer Players – While the matchdays have yet to hit double digits, there seems to be little debate over the best team in Major League Soccer. At 6-1-1, LAFC sits atop both the Western Conference and the Supporters’ Shield standings. The record matches the fast start LAFC had in what became a dominant 2019 regular season.

This team, though, is different. While some statistical similarities exist, the roster and coaching staff have stark differences. So is how LAFC wins games. This is the continued evolution of the club, something that was far from a given over the offseason.

LAFC could have continued its downward trend from the previous two seasons. Instead, they’re the early success story for a team regaining its status after a bizarre couple of seasons. It shows not only how strong this roster and coaching staff are but also the strength of the club’s management. The front office got rid of some key players and hired a new coach. Those moves are paying off.

Perhaps the riskiest of those moves was their choice to replace Bob Bradley, who left by mutual consent shortly after last season ended. LAFC filled its biggest hole with an unproven talent. Steve Cherundolo took over with just one season of coaching experience. At least from the outside, that was anything but a boon for his resume. Cherundolo’s Las Vegas Lights picked up just six wins in his one season in Sin City. The Lights went 6-23-3 overall, but parent club LAFC wasn’t looking for lower division points.

The Lights gave Cherundolo the experience he needed to manage professionals, establish an environment, and build toward something. That something never materialized a year ago. After just a few months in charge at topflight level, he’s certainly built something with LAFC.

Based on early returns, this season looks like it could be similar to 2019 was, at least based on early returns. This year’s team has an identical record, has scored two fewer goals (19 versus the 21 the team scored three years ago), and has allowed just two more goals now than it had at this point in 2019 (eight versus six).

The 2019 version had wins of 5-0, 4-0, and 4-1. Meanwhile, this team has hit the four-goal mark just once. Also, that team featured the likes of Diego Rossi and Adame Diomande, both of whom are long gone from this club. Vela is one constant between the two teams but Vela’s output this season hasn’t been great. Over the last four games, Vela has contributed no goals and two assists. Still, that is actually a positive. LAFC has scored ten goals despite its best scoring threat pitching in just two assists.

Vela still leads the team in goals with four, but the club has had a balanced attack. Four players have scored two goals apiece. A total of 12 players have found the back of the net already this season.

Cristian “Chicho” Arango has only scored twice this season, but he and Vela form one of the league’s deadliest attacks. Arango hit the ground running a year ago, scoring 14 goals in 17 games. Arango has only started four of the club’s eight games, though, as he continues to figure out his place in Cherundolo’s squad. Both of his goals have come in the last three games and he scored twice in a 5-1 US Open Cup win over Orange County SC on April 20.

In its latest match, though, LAFC looked like anything but the league’s top team. LAFC trailed lowly FC Cincinnati by 1-0 at halftime, and the team looked stunned. FC Cincinnati was missing seven starters and just did not look sharp. LAFC rallied, with substitute Danny Musovski scoring the game-winner.

LAFC now has three come-from-behind wins in its last four victories. The one match where the club could not come all the way back from a deficit was its 2-1 loss to rivals the LA Galaxy.

Still, these comeback wins and situations are helping the club build up mental toughness. The 2019 version steamrolled opponents, but this team is winning by keeping its composure and continuing to fight.

LAFC also has not faced the most difficult schedule. They’ve beaten FC Cincinnati, Vancouver, and Sporting KC, three of the bottom four teams in the league so far this season. The only team LAFC has beaten that has a winning record this season is Orlando, who sits in 3rd-place in the Eastern Conference table with a 4-3-2 record.

That will change soon. LAFC hosts Minnesota (5th in the Western Conference with a 4-2-2 record) and Philadelphia (1st in the East with a 5-1-2 record). Then they’re at Colorado and home to Austin FC (2nd in the West with 5-1-2 mark). LAFC will need to show a lot in the next four weeks to keep their top spot in the West.

Any comparisons to 2019 underline the success for LAFC so far. This is a team that has recovered by forging a new identity and style of winning.