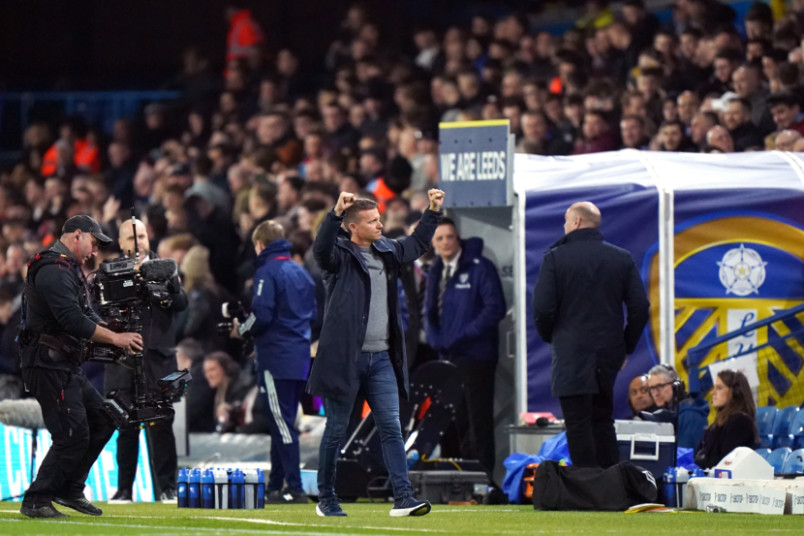 Monday’s soccer news starts with Jesse Marsch’s Leeds United seeing space in what looked like a relegation fight. Leeds is in 16th-place with 33 points from 32 games. They’ve got a two-point lead and a game in hand over 16th-place Burnley, four points ahead of 18th-place Everton. That it’s Everton in the relegation zone is somewhat of a surprise, but their 2-0 loss at Liverpool isn’t.

Leeds plays at Crystal Palace later today in a game that can’t move them any higher up the table but where a win would increase the distance between them and the relegation zone to seven points. That’s underlining the difference Marsch is making, with the club currently on a four-game unbeaten run, winning three.

“I just hope we can get the result because it will help us massively,” Leeds United midfielder Mateusz Klich said. “Until we are 100 percent sure that we are going to stay up, we can’t really relax. We need to keep pushing because nobody is really going to help us and we need to win games by ourselves. It’s going to be an intense finish to the season and you need some mental strength to be able to cope with the situation, but I think we handle it pretty well.”

Meanwhile, Everton’s situation should be on the minds of the teams ahead of them. Losing at Liverpool wasn’t exactly a surprise, and there next game is home to Chelsea. At Watford on May 11 and home to Crystal Palace on May 19 are the only times they play teams with less than 40 points.

“There are 18 points to fight for. That is a lot of points,” Everton manager Frank Lampard said. “It is important for the players and fans and Club not to get sucked into that in a negative way. Be realistic, yes. But there are a lot of games for us to try to win.”

Also in the soccer news, USMNT player Gyasi Zardes officially became a member of the Colorado Rapids on Friday, traded by the Columbus Crew for allocation money. The next day, he subbed on in the 60th minute for Colorado in their 0-0 home draw with Charlotte.

“I know it was a quick turnaround, but just to be a part of this group, I’m excited to start this new journey,” Zardes said. “I had to get adjusted to the altitude right away, but it’s about understanding the players that are on the field with me.”

Here’s Brenden Aaronson giving his thoughts on our title victory, his plans for the day, and the path ahead 🎙

PS: He doesn’t seem too big on the beer showers 😂 pic.twitter.com/qmS31jQ40e