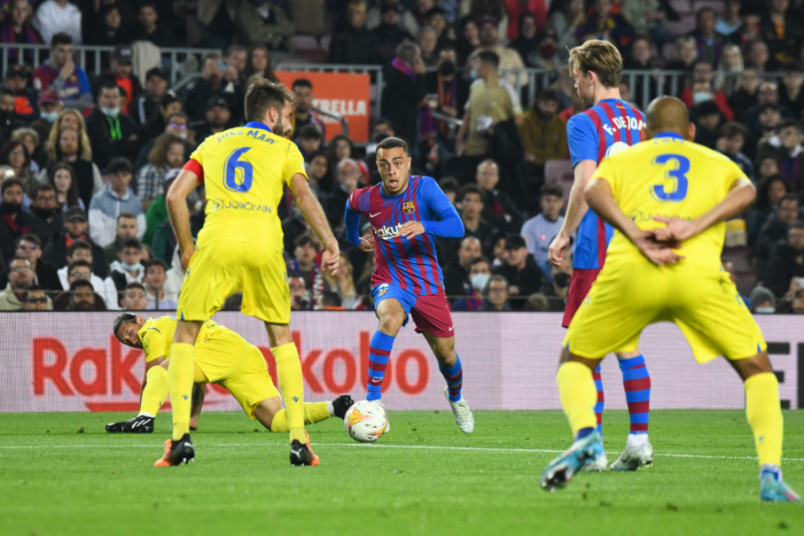 Sergino Dest subbed out in stoppage time for Barcelona’s 1-0 home loss to Cadiz in La Liga. Cadiz scored in the 48th minute. Barcelona is in 2nd-place, leading a group of three teams on 60 points with a game in hand. Dest saw yellow in the 70th minute.

“We need to react, because it was a very difficult game today,” Barcelona coach Xavi said. “They defend very well. We create not so many chances but at least to score one goal. We concede two or three very good chances for Cadiz and Cadiz was more effective than us. So we need to react now and the next game to get three points, because it will be difficult to qualify for the Champions League next season.”

Andrija Novakovich scored in Frosinone’s 4-4 win at Ternana in Serie B. Marcus Rohden put Frosinone up in the 10th. Ternana equalized in the 21st and an own-goal put them up in the 27th. An own-goal leveled the score for Frosinone in the 37th, but Ternana made it 3-2 in the 47th. Federico Gatti scored for Frosinone in the 64th. Ternana made it 4-3 in the 77th with Novakovich equalizing from the penalty spot six minutes into stoppage time.

Ethan Horvath was on the bench for Nottingham Forest’s 4-0 home win at West Brom. Daryl Dike wasn’t in the squad for West Brom. Going a man up from a Darnell Furlong red card in the 17th minute, Brennan Johnson converted a Forest penalty in the 19th. Ryan Yates made it 2-0 in the 23rd and Jack Colback added a goal in first-half stoppage time. Sam Surridge finished off the Forest goals three minutes into stoppage time.

Duane Holmes was on the bench for Huddersfield Town’s 2-0 loss at Middlesbrough. Noby Sarr scored in the 41st and Jordan Rhodes doubled the lead in the 60th. Lynden Gooch subbed on in the 74th minute for Sunderland’s 0-0 draw at Plymouth Argyle in League One.

Jonathan Amon wasn’t in the squad for Nordsjaelland’s 0-0 draw at Velje BK in the Superliga.Ulysses Llanez subbed out in stoppage time for St Polten in their 2-1 home win over LASK Juniors in the Erste Liga. Falling behind in the 21st minute, Doginmani Silue equalized for St Polten in the 54th and Kresimir Kovacevic scored in the 58th. Romain Gall wasn’t in the squad for Orebro’s 2-0 loss at Norrby in the Superettan. Jiloan Hamad scored in the 45th and Noel Milleskog made it 2-0 in the 90th.

Moving to MLS, the San Jose Earthquakes announced that Matias Almeyda is no longer the club’s coach. The Earthquakes promoted MLS NEXT Pro coach Alex Covelo as interim. “I want to thank Matias and his staff for all their hard work and passion since 2019,” San Jose GM Chris Leitch said in a press statement. “He has been a true professional and brought his full effort to every training session and match. Despite those efforts, we have not gotten the results that we or he wanted. We wish Matias and his staff the best of luck moving forward. There is still a lot of soccer to be played this season and we believe that we have a roster that can compete for the playoffs.”

Ligue 1 on beIN Sport: Reims vs Lille at 1pm and Angers vs PSG at 3pm. beIN en Espanol has Monaco vs Nice at 1pm. Premier League on USA: Chelsea vs Arsenal at 2:45pm. DFB Pokal on ESPN2: RB Leipzig vs Union Berlin at 2:45pm. Coppa Italia on CBS Sports: Juventus vs Fiorentina at 3pm. Liga MX on TUDN: San Luis vs UNAM Pumas at 8pm. Univision has Club America vs Leon at 10pm. Monterrey vs Atlas is on FS1 at 10pm ET.