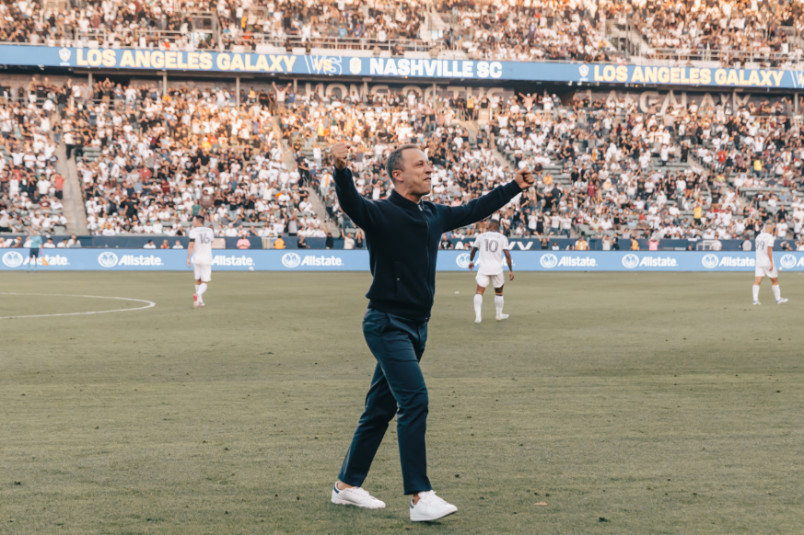 By Clemente Lisi – NEW YORK, NY (Apr 11, 2022) US Soccer Players – MLS coaches have gotten more tactically savvy in recent years. With better players come better tactics, and MLS teams have experimented with a wide variety of formations. Whether it’s playing with three in the back or relying increasingly on intricate passing, MLS coaches aren’t afraid to push the tactical envelope this season.

With its focus on youth players and a mix of veterans, MLS has seen the dominance of the 4-2-3-1 over the past few years. In 2021, for example, the use of three defenders became in vogue, like we saw with Seattle Sounders FC, and passing decreased. That second stat change could very well be tied to a global trend of playing the ball for fewer minutes, dragging down with it the number of completed passes.

On the eve of the 2022 season, MLS saw six coaching changes, something that normally triggers a shift in tactics. For as popular as it has been in MLS, the 4-2-3-1 is slowly morphing into other formations as new coaches look to either experiment or build on their predecessor’s work. That’s certainly the case at Los Angeles FC, where new coach Steve Cherundolo is having success with the 4-3-3. Here are three tactical trends to emerge in MLS so far this season.

Los Angeles FC under Cherundolo has used a 4-3-3 that relies on possession. Heading into this weekend, the team was seventh overall in the league with an 82.1% passing percentage. As a result, they led the league in goals scored with 14 from six games after this Saturday’s 2-1 defeat to the Los Angeles Galaxy in El Trafico and fourth overall in corner kicks with 34. That’s a result of Cherundolo’s attack-minded set-up, not too different from what Bob Bradley was trying to do there last season.

The 4-3-3 was effective for Italy at last summer’s Euros, although not in World Cup Qualifying once injuries kicked in, and at Liverpool in both the Premier League and in Champions League play. Not that LAFC is either Italy or Liverpool, but it does show that MLS follows trends that often emerge from Europe.

Tactics are fine, but the players on the roster to put those Xs and Os from the whiteboard to the field is what matters. In Cherundolo’s case, having a healthy Carlos Vela has really paid off for LAFC. Vela has four goals and two assists, meaning the winger has been involved in nearly half of the team’s goals so far this season. Of course, as any reference to LAFC can’t help but mention, that’s putting pressure on the club to get Vela signed to a new contract before his current deal runs out mid-season.

Red Bulls off to strong start with three-man defense

The New York Red Bulls are a team that often shows so much promise but falters in the end. This season already has a strong start to build on. Under coach Gerhard Struber, the team brought in a dozen new players as RBNY hit the reset button following yet another season without an MLS Cup.

Struber favors a 4-2-3-1, but this season he’s seen success by using a 3-4-2-1 with three in the back and a four-man midfield that has helped create build-up play. New York is in 3rd-place in the Eastern Conference following impressive recent wins against Toronto FC and New England before losing 2-1 at home to Montreal. The reasons for their success so far are many. It includes the return of defender Aaron Long from injury and the astute play of new signing Lewis Morgan, who already has three goals and an assist this season.

The 3-4-2-1 formation is rare because it leaves the defense vulnerable. In RBNY’s case, that is made up by Long’s talent as a center back and the goalkeeping of Carlos Miguel Coronel. While a blunder cost them a point against Montreal on Saturday, there’s still plenty of upside to the tactical risks the Red Bulls take.

Like last season, coach Josh Wolff uses a 4-2-3-1 formation, but the lineup often looks like a 4-1-4-1 since Diego Fagundez can play both in the midfield and as an offensive player on the wing. Add the versatility of Alexander Ring as both a defensive midfielder and as an offensive threat, and the formation can shift. Wolff’s side is attack-minded as well, scoring five goals against FC Cincinnati and Inter Miami.

Center forward Sebastian Driussi leads the team with four goals and three assists in six matches. That’s helped Austin FC get off to a solid start in just their second season. Wolff has had the double duty of having to put together a winning product on the field but also help create a team identity. For now, what we’ve seen is a flashy style that’s been fun to watch.

The 4-1-4-1 relies on the holding midfielder staying close to the back four. Daniel Pereira, the first overall pick in the 2021 MLS SuperDraft, plays that role for Austin. Pereira is a wonderful passer and may be one of the most unheralded players in the league. He’s due to get more attention should Austin FC climb up the standings this season.