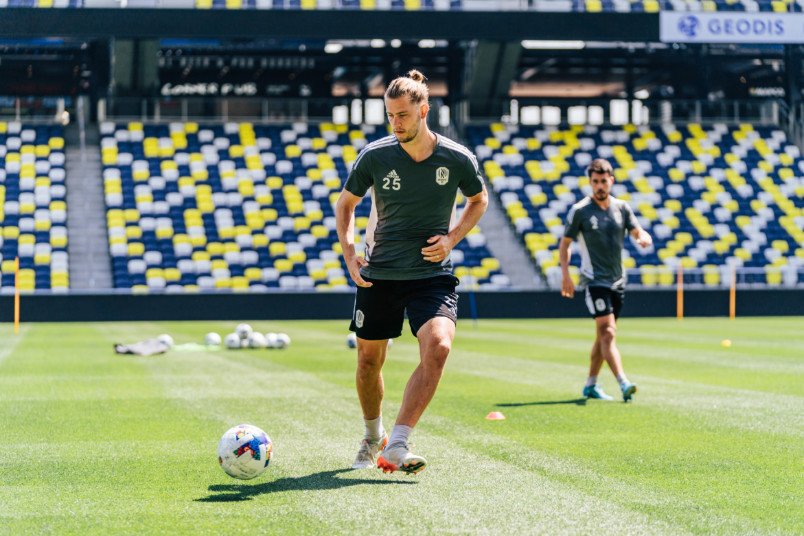 By Jason Davis – WASHINGTON, DC (Apr 29, 2022) US Soccer Players – With apologies to Albert King and Tennessee’s other music mecca, Nashville SC was born under a bad sign. Unlike the protagonist of King’s famous blues song, Major League Soccer’s 26th franchise didn’t let a bad start keep it down. Despite entering the top division of soccer in North America during one of the most trying seasons in the league’s history, Nashville now ranks among the leading clubs.

A lot of the respect that Nashville now commands comes down to success on the field. Under the direction of principal owner John Ingram, CEO Ian Ayre, general manager Mike Jacobs, and head coach Gary Smith, Nashville built a verified contender for MLS trophies in just a few years.

Nashville made the playoffs in its debut season, navigating a schedule torn apart by the pandemic. The club then went on to win a postseason game when it knocked off Toronto FC in the first round of the expanded 2020 tournament, a feat that still eludes every other MLS expansion team that entered the league after 2017.

Though the league lowered the bar and made it easier for teams to get into the playoffs because of COVID-19 limitations, Nashville’s achievement didn’t feel like a fluke. The club backed up that belief by not only qualifying for the playoffs in its second year but finished third in the Eastern Conference.

Nashville finished tied on points with second-place Philadelphia but came in behind the Union thanks to the league’s tiebreaker rules. Though LAFC and Atlanta United wrecked the curve for second-year expansion franchises by winning trophies in their sophomore seasons, Nashville’s run to the conference semifinal, a loss to the Union, announced it as a force to be reckoned with for the foreseeable future.

All of the club’s success to this point has come without it having a proper home. From the beginning of the push to bring MLS to Tennessee, Ingram and club leadership intended for the team to start its top division life in a purpose-built soccer stadium. The league has made exceptions in some cases, but there remains a stadium plan prerequisite for most new MLS cities. Nashville was set to meet the requirement before both the expected and unexpected conspired to slow the stadium-building process.

The expected came in the form of resistance to the club’s plan. The city agreed to provide land for the building on the site of the Nashville Fairgrounds, prompting lawsuits from a group that claimed the stadium violated a charter governing the use of the fairgrounds. Local political upheaval didn’t help the process.

Legal fights are a normal part of stadium building. Nashville’s expansion mates, Inter Miami, needed nearly a decade to put together a plan that could pass the city’s notoriously difficult commission, in part, because of delays caused by lawsuits.

Inter Miami finally got its plan past the line on Thursday night, but it’s unlikely the job will end there. Nashville can tell Miami a thing or two about the process that comes after city council approval and the pitfalls that might extend the timeline. When Nashville finally reached the point of beginning construction on its stadium, the lawsuits and issues with contractors once again caused delays.

Then there was the pandemic. Construction ground to a halt as the world shut down, forcing the club to use Nissan Stadium as its home for yet another season. Amid the turmoil, a judge dismissed the final lawsuit ensuring there would be no more legal problems.

In fairness to Nashville SC, the stadium delays don’t seem to have hurt the club’s ability to capture the attention of fans in the region. They drew more than 18,000 per game at the city’s NFL stadium. The home of the Titans proved to be fine for the city’s soccer team. That’s where they established the club’s in-stadium culture, complete with Music City touches like a pre-game guitar riff. The reward was winning soccer. The same thing now shifts to the recently christened Geodis Park.

Nashville SC and its fans won’t take their new home for granted, not after the long wait for the building to finally open. Nor should they, because the building of soccer stadiums in America is still something of a marvel. Plenty of fans are old enough to remember when MLS clubs could do little better than rent time in cavernous NFL venues. Ones with gridiron playing surfaces and minimal soccer-specific touches.

A soccer stadium makes for an easy metaphor. It’s a foundation on which the club can build its place in the community it represents. Most importantly, though, a soccer stadium is a stage for the team to perform for its fans. The best stages are finely tuned to a performance. Everything at Geodis Stadium gives Nashville SC the best chance to win. That can only make Nashville better.

The culture the club has developed will get richer, deeper, and louder. No one in Nashville wanted to wait this long for a soccer stadium, but the wait will be worth it for what it means to a club that didn’t put off building a winner until its new home opened.

It’s a cliche, but it’s a cliche because it’s true. The 30,000 people who fill Geodis Stadium for Nashville SC’s first game there, regardless of the outcome of the match against the Union, will swell with years of retelling. More fans than can fit in the largest soccer-specific stadium in the league will want to say that they were in attendance. Who can blame them?