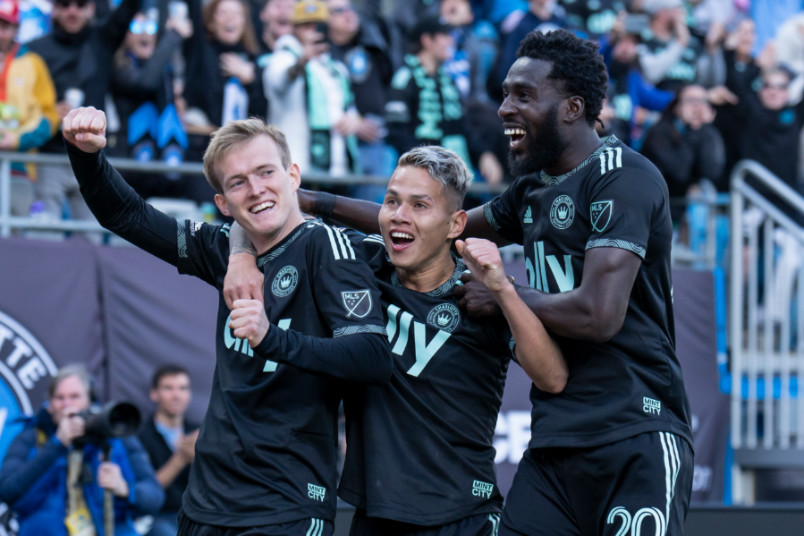 By Jason Davis – WASHINGTON, DC (Apr 5, 2022) US Soccer Players – For a while there, it was easy to judge Major League Soccer teams against one another. With an even number of clubs this season thanks to the addition of Charlotte, the league’s weekend schedules had balance. Twenty-eight teams playing fourteen games in a given week means the season creeps along at an equitable clip. When everyone is on the same number of games played, the standings reflect the good and the bad.

That didn’t last very long. In theory, the international break paused the MLS schedule. In practice, six teams chose to schedule games. That means six games played for them, five for everybody else. Those clubs are Orlando City, Charlotte FC, FC Cincinnati, Real Salt Lake, Sporting Kansas City, and the Portland Timbers.

Let’s start with the newest club in the bunch, Charlotte FC. This season’s expansion entry is already experiencing what that normally means in Major League Soccer. For every bit of progress, there’s a stark reminder that new teams typically find things difficult.

Following two good weeks against teams expected to be on the bottom end of the standings, Charlotte fell hard to the Union on Saturday. Charlotte’s level is closer to mediocre than bad, somewhat of a result that fans of an expansion team should be encouraged by. Standouts for Charlotte included first overall draft pick Ben Bender and Designated Player striker Karol Swiderski. Swiderski looks like a smart signing. Charlotte getting its first DP striker signing right is no small thing when it comes to setting a tone for future success.

Charlotte beat FC Cincinnati 2-0 at home during the international break. Cincinnati’s long walk towards competitiveness is one of the league’s more chronicled stories. FCC’s new leadership isn’t working to win an MLS Cup in 2022. Instead, coach Pat Noonan and general manager Chris Albright hope to improve performance to the point that eventually, they’ll get the results.

FCC does have four losses, tied for most in the league. It also has two wins, which is half its 2021 total. It’s fair to call that progress. Losing to an expansion team doesn’t reflect well on the fourth-year team from Ohio, but there’s at least a glimmer of hope that things are getting better.

That glimmer sometimes means looking past the occasional ugly result, like Cincinnati’s 4-3 home loss to Montreal this weekend. FCC might have an emerging star in forward Brendan Vazquez, who scored again to bring his season total to five, but the club is still a mess defensively. Cincinnati gets a chance to work on its issues as one of two clubs getting a bye this weekend. FCC will be back in line with the bulk of the league following their week off.

Orlando City got a reasonable result from its trip to Portland during the international window, a 1-1 draw. They followed that up with a humbling 4-2 home loss to LAFC on Saturday. So far, the Lions are the definition of average in MLS. Through six games, they have two wins, two losses, two draws, and a zero goal differential. Nothing about Orlando looks bad, but they’ve got work to do to match preseason speculation.

City is still working out how to replace the goals the club lost with the transfer of Daryl Dike and the departure of Nani. The returns for now-healthy Alexandre Pato are encouraging through six games after he scored his second goal of the season against LAFC. Orlando’s problem is balance in a team that asks too much of its defenders if/when the Lions go big with the attack. The task of slowing down opponents will be even tougher with central defender Antonio Carlos perhaps lost for months after he suffered a torn hamstring against LAFC.

Portland followed up that draw with Orlando by losing 3-0 at home to the Galaxy on Sunday. So far in MLS, the Timbers have suffered without a fully healthy Sebastian Blanco. Blanco is the key attacker for a team that needs a creative focal point to play through. It also doesn’t help that Felipe Mora has yet to appear this season after knee surgery in late February. It’s never smart to count out the Timbers, but this season is already as much about what is happening off the pitch as on it.

Of the Western Conference teams sitting on six games, Real Salt Lake can boast the best position in the standings. vThey lost 1-0 at Sporting Kansas City during the break, but there’s an argument that RSL is the surprise package of the 2022 season’s early stages. Despite the club sneaking into the playoffs last year and beating Seattle in one of the more remarkable playoff upsets in recent memory, conventional wisdom had Real Salt Lake backsliding this season.

RSL has benefited from a healthy dose of good luck, catching Seattle, New England, and Nashville in the throes of early-season difficulties. They beat a Seattle team focused on the Champion League, a New England team doing the same without Matt Turner, and a Nashville team navigating a long road trip to begin the year.

But RSL has also managed its good start while missing starters across the team due to injury. Head coach Pablo Masteroeni is working magic at the moment by getting a decimated but hungry team to give maximum effort. When his team gets healthy, it stands to reason it will only be better.

It’s a different story for Sporting Kansas City. For a team whose only goal is to win MLS Cup every season, the start of 2022 hasn’t gone to plan. SKC got those three points against Real Salt Lake, but a 1-0 loss to an underwhelming Vancouver team on Saturday reinforced the growing impression that this version of Sporting doesn’t have the legs to contend.

Through six games, Sporting has just six points. There aren’t easy points coming, either. After a visit from Nashville, SKC will be on the road against LAFC the following week. Sporting already has an extra 90 minutes to know that they need to find improvement, and quickly.