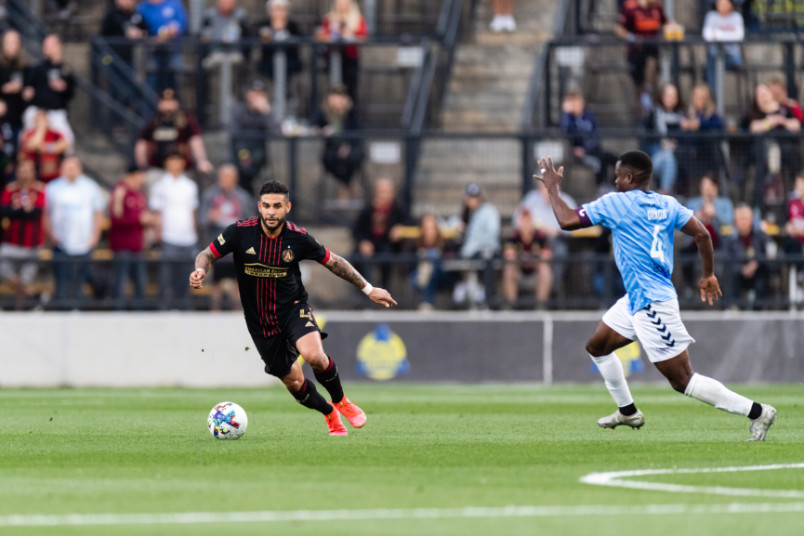 By Charles Boehm – WASHINGTON, DC (Apr 21, 2022) US Soccer Players – It’s been a fascinating midweek of action in American soccer. The US Open Cup’s third round, the stage at which MLS teams begin to enter the tournament, offered up a packed slate of 24 matches across Tuesday and Wednesday nights.

Those paying attention could immerse themselves in what makes domestic cups interesting all over the world. ESPN made all the games available on ESPN+, the Worldwide Leader’s streaming platform. Most match-ups featured teams from different levels of the pyramid, and drama unfolded all over the place. Austin FC, Chicago, Columbus, and Real Salt Lake were the MLS representatives not going through to the round of 32, the the upsets that so many viewers crave.

As Soccer America’s Paul Kennedy noted, the third-tier USL League One was the big star, its teams going 6-3 against their second-division counterparts from the USL Championship and 2-2 vs MLS. It was two evenings to savor, rich in the kind of romance so widely cherished around the FA Cup, Copa del Rey, and other such events in global soccer hotbeds. Just with a distinctly US accent.

Yet so much of the discourse around the Open Cup continues to revolve around what the tournament is not, or what it could or should be, rather than what it is.

RSL set a new third-round Open Cup standalone attendance record with the 19,301 who flocked to Rio Tinto Stadium to witness their upset loss at the hands of Northern Colorado Hailstorm FC. Several of RSL’s MLS counterparts hosted games in mostly-empty arenas, however. Those games had a training-ground atmosphere in stark contrast to the noise and intimacy in places like Detroit, San Antonio, and Greenville, South Carolina.

In general, it’s unclear just how large a percentage of the USA’s soccer-consuming population is even paying attention. In past years ESPN occasionally moved bigger matches, like some of FC Cincinnati’s 2017 underdog run to the semifinals, to cable. The network’s desire to promote its streaming vehicle has kept that to a minimum, though, which is good for hardcore fans but misses out on a bigger general audience.

For many observers, David-and-Goliath occasions are what’s appealing about a domestic cup competition. In North America, that means Major League Soccer playing the Goliath role, regardless of the strength of squad. How far that should go and what sense of fairness should guide it can be quite subjective.

Often the involvement of bigger clubs leads to more interest and attention for the event as a whole, including the biggest matchday crowds. Logic and history alike, both here and abroad, suggest that these competitions will eventually crown a professional club the winner. More to the point, a topflight professional club. Only a handful of lower-division clubs have ever won England’s FA Cup, for example, and none since the modern advent of the Premier League.

Finding a balance and bringing it to reality has been quite difficult for Open Cup decision-makers. There are only so many matchdays available, much less the logistics and financing required to put on a national tournament. What looks like MLS dominance may frustrate some fans of lower division clubs, but it happens for a reason.

Alternatives are difficult. Dropping the regional draw format could shake things up with new match-ups and less-familiar opponents. Conversely, it would ramp up travel costs and times significantly. Throwing MLS teams in earlier in the process would expose them to more upset scenarios. However, it would also stretch out the schedule and likely bring it into conflict with the Concacaf Champions League or the newly-expanded Leagues Cup that launches next year.

Even as it stands now, extending the Open Cup’s length with more spring action has already squeezed out many amateur and semi-pro sides who can’t play pro-length seasons and/or depend on out-of-season college players during the summer months. Those that can commit to fall or winter play may face a lengthy qualifying road that tests the resources of both organizations and individuals.

The constraints are real, stressed with every edition of the US Open Cup. That doesn’t have to take much of anything away from the value of the competition. MLS dominance makes sense, given how the pyramid in this country is structured. Asking more from the US Open Cup ends up being about asking more from the entirety of American professional club soccer. It’s a bigger set of questions that haven’t gotten any easier to try to answer.