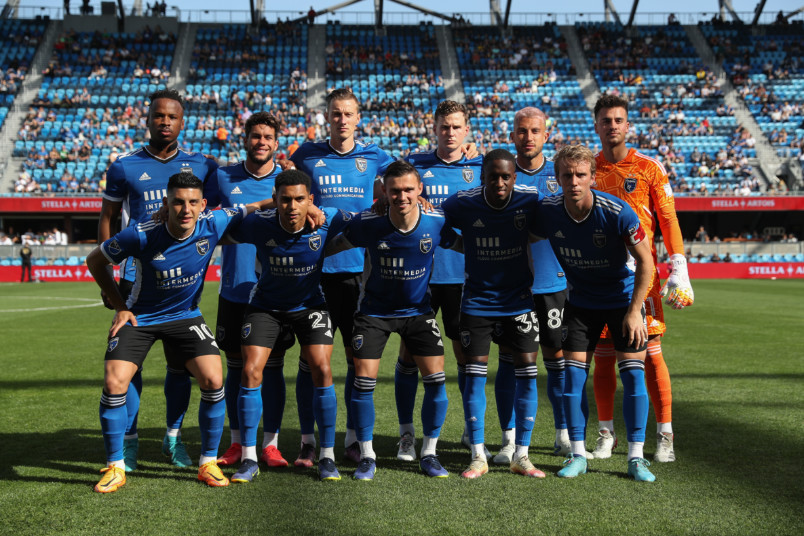 By Luis Bueno – RIVERSIDE, CA (Apr 20, 2022) US Soccer Players – Over the last several seasons, the San Jose Earthquakes have been many things. One of those is entertaining. The Quakes’ offense has been okay to solid, the defense poor to disastrous. That’s made for high-scoring, fun, and often exciting matches. That has not exactly been the formula for success, however.

San Jose has been unable to find a balance between an exhilarating product and success on the field since the Goonies era a decade ago. Their latest attempt to change that situation was to “part ways” with head coach Mathias Almeyda on Monday, less than two months into the 2022 season.

In the press statement announcing the move, San Jose GM Chris Seitz said, “there is still a lot of soccer to be played this season and we believe that we have a roster that can compete for the playoffs.”

Perhaps, but it will take some work. This year’s squad, which includes some high-profile offseason acquisitions, has been working together for three months now under Almeyda’s guidance. While the results have been poor, all of that work builds on a specific style of play. Under interim coach Alex Covelo, that will have to change.

Lately, that’s been the norm in northern California. San Jose has undergone multiple revamps since last getting past the first round of the playoffs over a decade ago. The team won the Supporters’ Shield in 2012 but crashed out in the first round. Since then, the Quakes have reached the playoffs just twice, in 2017 and 2020. Both times the postseason lasted just one match.

Under Almeyda, how they won and lost games certainly changed. A pressing style can produce some outstanding offense, but most of the time that ran into underwhelming displays. The result was a team struggling to factor in the Western Conference. Still, any improvement counts. Almeyda took over a bad situation. San Jose put up a 4-21-9 record the year before Almeyda took over. They won 13 games in his first season despite missing the playoffs.

The tumultuous 2020 season saw San Jose make the playoffs. They also did well in the MLS Is Back tournament that year as well. However, 2021 was the same up-and-down pattern. The team won ten games, but it was not nearly enough to get into the postseason. They finished seven points back of 7th-place Real Salt Lake.

San Jose’s defense has been the root of the club’s problem for years. The last season the Quakes finished with a positive goal-differential was 2015 at +2. Yielding so many goals does make for an interesting team. San Jose knows how to score, but their attack can’t keep up with the opposing team’s offenses.

This year was supposed to turn things around. The Earthquakes made interim general manager Chris Leitch the permanent hire. The onetime Quakes player was diligent in attempting to improve the roster. The club brought in players such as Francisco Calvo, Jan Gregus, and Jamiro Montero and a year ago had traded for Jeremy Ebobisse. The quartet had found success in other places around the league with Gregus and Montero joining as Designated Players. Turning that talent into a clear advantage is an ongoing project.

San Jose is winless at 0-4-3, allowing a league-high 17 goals. The club is already eight points out of 7th-place. In a loaded Western Conference that does not bode well.

The conference is top-heavy, with Seattle, LAFC, and the resurgent Galaxy leading the way. Seattle is actually on seven points, but the team figures to be in the mix. 2nd-place Austin and 4th-place FC Dallas are the surprises so far.

It’s certainly worth asking what it might have taken to keep Almeyda in his job. Though the wild swings in results aren’t hallmarks of Major League Soccer, that style helped him win Liga MX and the Concacaf Champions League with Chivas. Liga MX seasons are shorter. A team just needs to peak at the right time to find success. That used to work in MLS as well, but the league has gotten complicated.

Now the team places its hopes in Covelo, promoted from Earthquakes II in the MLS NEXT Pro league and with experience coaching in Spain and Italy prior to joining the Earthquakes organization in 2017. San Jose legend Chris Wondolowski is one of his assistants, along with MLS and USMNT veteran Steve Ralston. If the new approach is focusing on what works in MLS rather than reinventing a tactical approach, there’s plenty of experience.

It’s tough for any MLS team to try to lean on history, especially when it happened prior to the expansion era. San Jose was once the strongest team in the Western Conference. That team carried its form to Houston in 2006, winning two more MLS Cups.

The newer version of the Quakes attempted to rebuild around former coaches and players, but that had limited success. Almeyda’s time was about a different way of playing in MLS, the type of style that the league regularly loses to in the Champions League. What they become over the rest of 2022 may be easy to guess. We’ve seen versions of this story play out before in San Jose. As always, it focuses on the defense.