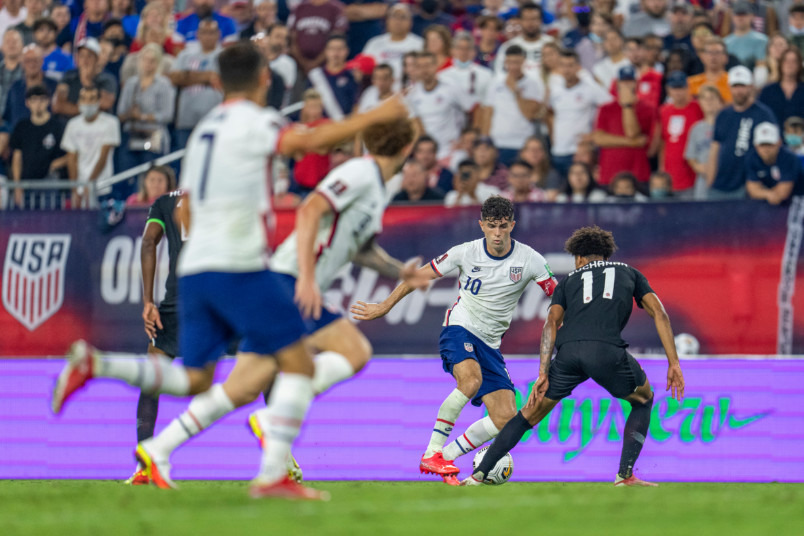 By Clemente Lisi – NEW YORK, NY (Apr 4, 2022) US Soccer Players – It’s an event that will help fuel speculation for the next seven months. It will trigger predictions, many of them ending up being wrong, about who will or won’t win the planet’s biggest sporting event. The World Cup draw, which was conducted this past Friday, brought into focus the tournament’s eight opening-round groups and potential paths to the final.

The United States, back at the World Cup for the first time since 2014, and Canada, who ended a 36-year drought since last qualifying for Mexico ’86, are both part of the 32-nation finals that will be played in Qatar starting this November. It is the first time that the World Cup will be played in the winter, in the middle of the European club season.

It is also the first time that both the US and Canada will play in the same finals, a boon for MLS since many players on both teams play domestically. It comes ahead of the 2026 tournament, co-hosted by the United States, Canada, and Mexico.

The US and Canada are both in the midst of a youth resurgence. It was a new generation of players in their early 20s that allowed both nations to finish ahead of Mexico in the highly-competitive Octagonal. A new edition of the Concacaf Nations League begins in June and a series of friendlies will be what helps the US and Canada prepare for what’s in store in seven months.

Here is a look at both the USA and Canada’s opening round groups, how they can fare, and what their opponents could have it store for them.

After finishing third in the Octagonal behind Canada and Mexico, the US ended up in Pot 2. FIFA seeded pots based on world ranking, with the United States 15th. As a result, they were one of the first nations to be pulled from the plastic bowls and could have ended up in Group A with host nation Qatar.

That would have been the most favorable outcome, but that fell to the Netherlands. The USMNT ended up in group B with England.

“It’s a good group,” US coach Gregg Berhalter told Fox Sports after Friday’s draw. “With England, it’s always an exciting game, there’s always a lot of attention around that game. We’re familiar with a lot of their players, so I think it’s a great matchup.”

There’s lots of history, both sporting and political, when it comes to the US and England. They’ll play each other on November 25, the day after Thanksgiving. There will certainly be a captive TV audience for that one given that it’s Black Friday and sports fans spend a lot of time in front of the television during that long weekend.

The USA vs England clash is the second of the group stage. The Americans will open group play on November 21 against the winner of the European Playoff. That means facing either Wales, Ukraine, or Scotland, something that we won’t know until June. Wales is the toughest of this trio given that they are ranked 18th.

The USMNT closes the group on November 29 against Iran. Iran is ranked 21st, meaning that group B has the potential to be the toughest at this tournament should Wales ultimately qualify. In reality, this draw failed to produce a niteably difficult group, meaning all of them are balanced and not immune to upsets.

“The negative is that you have very little time to prepare,” Berhalter said. “Our guys will come over, they’ll be playing on the weekend, and we’ll get them literally a week before the World Cup. That’s a challenge. On the positive side, if we advance we get a bit more rest (before the round of 16).”

Already foucising on what happens next speaks to the drive and intent of a very young group. The United States continues to put the work in to succeed, and they should expect results in Qatar.

The Octagonal winners will be looking to gain experience at the World Cup. They could also pull off some surprises. Canada, who was in Pot 4 and ranked 38th in the world, was drawn into Group F alongside top-seeded Belgium, a 2018 World Cup semifinalist, Croatia, runners-up at Russia 2018, and Morocco.

“We wanted those type of games. I think you go into a World Cup, there are no easy matches and I think any team can beat any given team on a given date,” Canada coach John Herdman told reporters. “That is just tournament football.”

Canada avoided Group E, maybe the toughest group for any pot 3 team since it features traditional powerhouses Spain and Germany. That would be where Costa Rica ends up should they beat New Zealand in the Intercontinental Playoff. The Canadians open on November 23 against Belgium, currently #2 in the world, and follow that up four days later against 16th-ranked Croatia.

“I think Belgium, we know their quality with players like (Kevin) De Bruyne, (Romelu) Lukaku and what they have done on the international stage and then the Croatians, who four years ago were the finalists,” Herdman said.

The team will need at least a point from those two first games and a win against 24th-ranked Morocco on December 1. Then again, underestimating Canada became a theme of the Octagonal. Concacaf now knows that Canada can pull off some surprises. To become the Cinderella team at this tournament, Canada needs more of the same.