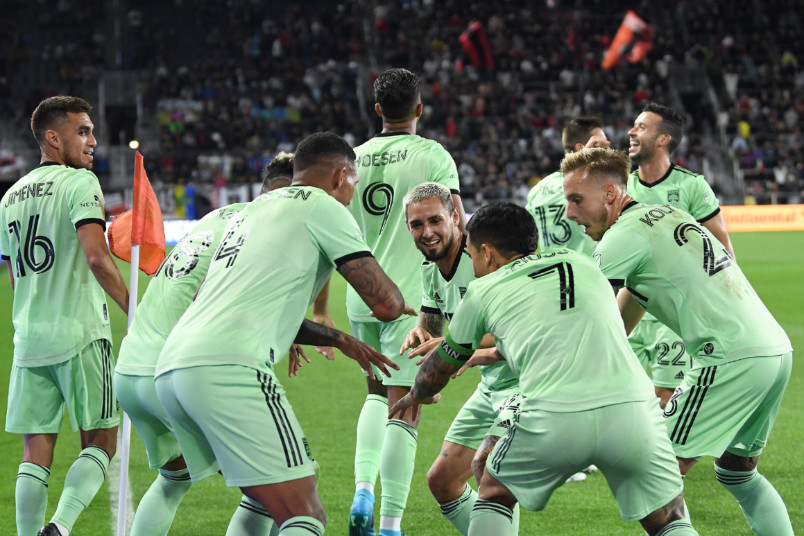 Monday’s soccer news starts with one example of the kind of situation we should expect to see in the MLS tables. With games played yet to hit double-digits, a few points can remake the standings. Austin’s win at DC United highlighted that, keeping them in 2nd-place in a conference where three points now separate 2nd from 8th.

Austin has played well enough through their seven games to no longer be much of a surprise at the top of that group. Their comeback at DC United was certainly helped by playing a man up, but it still took three late goals. Scoring hasn’t been an issue for Austin, tied with LAFC for most goals scored across the league at 17. It’s Austin and LAFC with the best goal difference in MLS as well at +10. Switch the result at Audi Field, and Austin drops to 7th, ahead of Minnesota and Nashville on that goal difference.

What that creates for Austin are expectations. This is now a team that should be at or near the top of the Western Conference. They trail 1st-place LAFC by two points, but perhaps the bigger concern is how close Austin remains to 8th-place.

“We’ve remained calm in this entire process of building a team,” Austin coach Josh Wolff said following the win at DC. “The first year came with some difficulty. There were plenty of successes for us, I think, as a group in the first year. It was going to be a grind, and it was a grind. I think we learned about ourselves, we learned about our team, we learned a lot about our city and our fans. We made adjustments in the offseason. We brought in players that have more character, more leadership. They also have quality, familiarity with the league. We continue to develop our ideas, our game model. Not every game is perfect, but this game is a signature win to date, probably.”

It’s also worth the mention that had DC United held onto their 2-0 lead at home, those three points would have them 8th in the East rather than at the bottom of the table. DC may have a game in hand over every team in their conference except for 10th-place NYCFC, but that’s not going to provide a lot of comfort.

United’s situation is that almost customary four-game MLS losing streak that started at home to Chicago on March 12. Losses at Toronto, home to Atlanta, and the Austin comeback followed. Where that leaves DC right now isn’t a straightforward question. They can see the space for them in the table as clearly as anybody else. This is the time of the season when last place can be deceptive. The four teams ahead of them are all tied on seven points, one more than DC’s six.

Expectation management is always part of the job for any club in any league. It’s tricky to get the tone right. Put too much weight on one result, and the next setback can loom larger than it should. That’s the balance needed right now in a league that is so close up and down the table. One week isn’t going to reset a season in either direction. At least not yet.

DFB Pokal on ESPN2: Hamburg vs Freiburg at 2:45pm. Premier League on USA: Liverpool vs Manchester United at 3pm. Coppa Italia on CBS Sports: Inter Milan vs AC Milan at 3pm. Liga MX on TUDN: Necaxa vs Tigres at 8pm and Toluca vs Juarez at 10pm. Universo has Chivas vs Tijuana at 10pm ET.