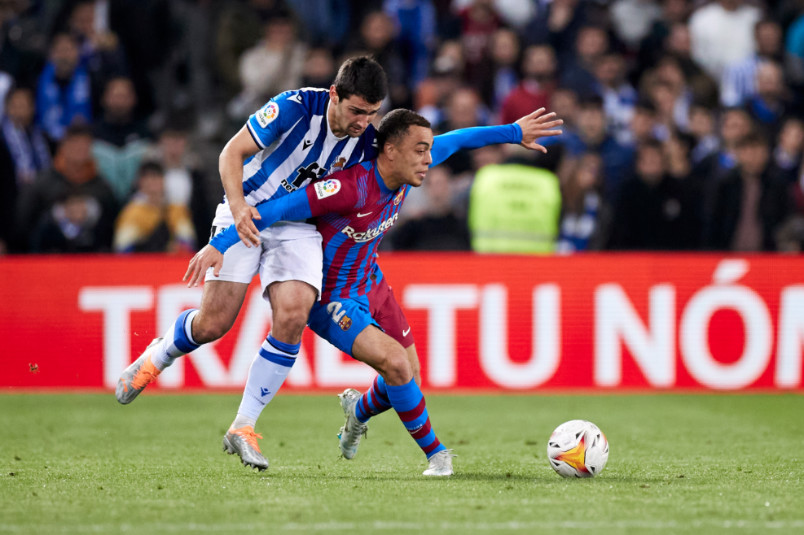 “I would say that it’s crucial,” Barcelona coach Xavi said of the three points. “It’s really important for us. It’s a big win against a very good opponent in a really difficult stadium.”

Barcelona is in 2nd-place in La Liga, tied on points with 3rd-place Sevilla at 63 but with a game in hand 32 to 33. They trail 1st-place Real Madrid by 15 points.

In not all that surprising news, Major League Soccer announced that the 2022 MLS All-Star Game will once again be MLS vs Liga MX for the most obvious of reasons. Whether or not it was “the most competitive MLS All-Star Game ever” as MLS commissioner Don Garber said in his press statement, it certainly ranks among them. The game is set for August 10 at Minnesota United’s Allianz Stadium (3:30pm ET – ESPN).

“For Liga MX it was a great experience to play in the MLS All-Star Game for the first time last year,” Liga MX president Mikel Arriola said. “The players gave their all to represent our league and everyone enjoyed an unprecedented game, where the fans of each of our 18 teams came together to support the LIGA MX team. For us, the opportunity to relive this experience in 2022 is exciting and fills us with pride, but we are committed to preparing ourselves in the best way, and with our best players, to seek a win, and of course, revenge against MLS.”

MLSsoccer’s Jonathan Sigal works through potential coaching hires for San Jose and DC. Bundesliga.com has a klassiker primer in advance of Saturday’s game on ABC. The Guardian’s David Hytner explains what happened with NAC Breda and City Football Group.

Thank you to TSG for everything. Only likely to be out for the next 3-4 weeks but sadly the season will be over by then… Appreciate all the support and messages from everybody and good luck to the boys for the remainder of the season. 💙 LeTSGo https://t.co/avCHnCw8wG

Saturday has the Premier League on USA: Arsenal vs Manchester United at 7:30am and Manchester City vs Watford at 10am. NBC has Brentford vs Spurs at 12:30pm.

Scottish Premierhship on CBS Sports: Motherwell vs Rangers at 7am. Serie A on CBS Sports: Venezia vs Atalanta at 9am. Ligue 1 on beIN Sport: Lyon vs Montpellier at 11am, St Etienne vs Monaco at 1pm, and PSG vs Lens at 3pm. Bundesliga on ABC: Bayern Munich vs Borussia Dortmund at 12:30pm. Primeira Liga on GolTV: Benfica vs Famalicao at 1pm and Gil Vicente vs Pacos de Ferreira at 3:30pm.

MLS on Univision: Dallas vs Houston at 3pm. TUDN has San Jose vs Seattle at 10pm. Liga MX on Univision: Pachuca vs Monterrey at 6pm and Tigres vs Club America at 8pm. Telemundo has Chivas vs UNAM Pumas at 10pm.

Sunday has the Premier League on USA: Chelsea vs West Ham at 9am and Liverpool vs Everton at 11:30am.

Ligue 1 on beIN Sport: Rennes vs Lorient at 7am, Nice vs Troyes at 9am, Lille vs Strasbourg at 11am, and Reims vs Marseille at 2:45pm. Premeira Liga on GolTV: Estoril vs Belenenses at 1pm.

MLS on ESPN: Inter Miami vs Atlanta at 1pm and Orlando City vs Red Bulls at 3:30pm. FS1 has Cincinnati vs LAFC at 5pm. Liga MX on Univision: Toluca vs Atlas at 1pm and Cruz Azul vs San Luis at 6pm. FS2 has Santos Laguna vs Leon at 8pm and Tijuana vs Queretaro at 10pm.

Monday has the Primeira Liga on GolTV: Braga vs Porto at 1pm and Boavista vs Sporting at 3:30pm. Super Lig on beIN Sport: Besiktas vs Kasimpasa at 1:30pm. Premier League on USA: Crystal Palace vs Leeds at 3pm. All Times Eastern