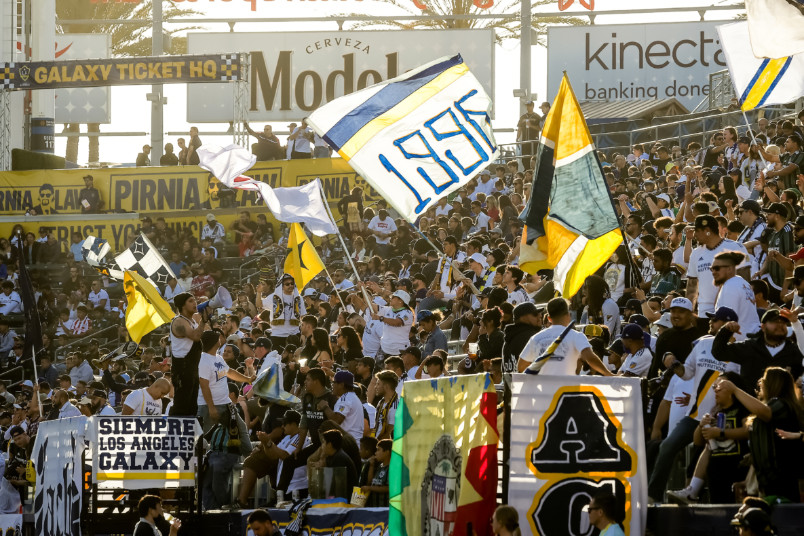 By Luis Bueno – RIVERSIDE, CA (May 25, 2022) US Soccer Players – In the evolution of all things Los Angeles soccer, the LA Galaxy vs LAFC rivalry has progressed nicely. Four years in, and the teams have already put on show after show. Each time they play, there’s the feeling that more than bragging rights are on the line. One or the other would like to make it clear that they are the soccer kings of Los Angeles.

One major prize in this rivalry will be at stake on Wednesday. While games in mid-May are usually not the kind that could tilt rivalries in favor of one team, this might be different. Though it’s still somewhat early in the tournament, the Galaxy will host LAFC in a US Open Cup match at Dignity Health Sports Park. The winner will advance to the Open Cup quarterfinals, while the loser will have no choice but to focus fully on the league.

Regardless of where the US Open Cup may land in the hierarchy of trophies available to American MLS teams, it represents a few things. The ability to navigate additions to the schedule is certainly one. So is maintaining form regardless of the competition. Then there’s the ticket to the Concacaf Champions League for the winner. While neither LAFC nor the Galaxy are necessarily looking for non-league routes into the regional championship right now, it’s still worth stressing.
<p
LAFC, of course, reached the Champions League final in 2021. Under pandemic restrictions, there were no home games in the later rounds. The Galaxy hasn’t played in the Champions League since 2015-16, making it to the quarterfinals. Playing the latter stages of the Champions League at Banc of California Stadium or Dignity Health Sports Park would be great for Los Angeles soccer.

Having a Champions League tie-in has helped give more of a payoff to the winner, but there are always teams that put value in the US Open Cup on its terms. MLS clubs have built identities in part based on US Open Cup runs. The Galaxy won the 2001 US Open Cup and did the MLS Cup/Open Cup double in 2005, but it’s an earlier LA team most associated with the trophy. Maccabee Los Angeles ties for most Open Cup titles, winning five from 1973 to 1981 in an era where the old North American Soccer League didn’t participate. The Galaxy’s two trophies tie them with several teams, including the Los Angeles Kickers that won in 1958 and ’64.

With the Open Cup, there’s always an appeal to history. Chicago, Seattle, and Sporting Kansas City have won four each, the leaders in MLS but far from the only teams that put value in the tournament.

So far in 2022, LAFC has played more of its regulars than the Galaxy has. LAFC started Cristian Arango in its previous two Open Cup matches. He responded with three goals, one more than he’s scored in league play. LAFC star Carlos Vela came on as a substitute in the third round against Orange County SC and in the round of 32 game against Portland

Meanwhile, the Galaxy didn’t use Douglas Costa in either of its first two Open Cup matches. Javier “Chicharito” Hernandez subbed on for the last 13 minutes in the third round match-up against San Diego Loyal. That might change given the opponent and what is at stake. Neither team will be able to use a depleted roster and/or starting lineup as an excuse. This is a single-elimination rivalry match. If that doesn’t inspire whoever is on the field, nothing will.

Considering LAFC’s relatively short history, there haven’t been a lot of knockout meetings between the two clubs. The last time was in the 2019 Western Conference semifinals. That game ended 5-3 LAFC in what turned out to be Zlatan Ibrahimovitch’s farewell for the Galaxy.

The Galaxy overall has dominated the rivalry and claimed perhaps the most eye-popping moment courtesy of Zlatan. He opened his MLS account with an astonishing long-distance bomb that helped fuel the Galaxy’s come-from-behind 4-3 win in the clubs’ first-ever meeting. The Galaxy leads the all-time regular-season series with a 6-1-5 record against LAFC, a rather lopsided edge to the MLS original.

LAFC is working to change a narrative, something that’s difficult when the other team has such a head start. The Galaxy has been around since 1996 when MLS was born. While the LAFC faithful aren’t shy about pointing out that the older club has never played in LA-proper, all involved know this is about regional supremacy. In no small part, every meeting becomes about that.

While league form may not tell us very much in the US Open Cup, the Galaxy has run into difficulty. After surging near the top of the Western Conference table with a dominant 1-0 win at Austin FC, the Galaxy began to struggle. The club lost by 3-1 to FC Dallas, escaped with a 1-1 draw at Minnesota, and then looked lost in a 3-0 setback to Houston at home on Sunday.

“We’ve been actually decent on the road,” Galaxy coach Greg Vanney said following that loss to Houston. “We’ve taken decent points. But, we’ve now let I think nine go at home, at least, and that’s not the Galaxy. The Galaxy win at home. It’s a fortress. And, we have to own that as a group and find that right formula as a team. Because, that’s going to be the difference for us.”

Going into the US Open Cup round of 16 game in Carson, LAFC knows better than to ever underestimate the Galaxy. LAFC can point to a playoff game back in 2019. That’s no small thing, considering it’s the only time the Galaxy made the playoffs over the last five years. Meanwhile, more often than not, it’s the Galaxy telling the story of this rivalry.