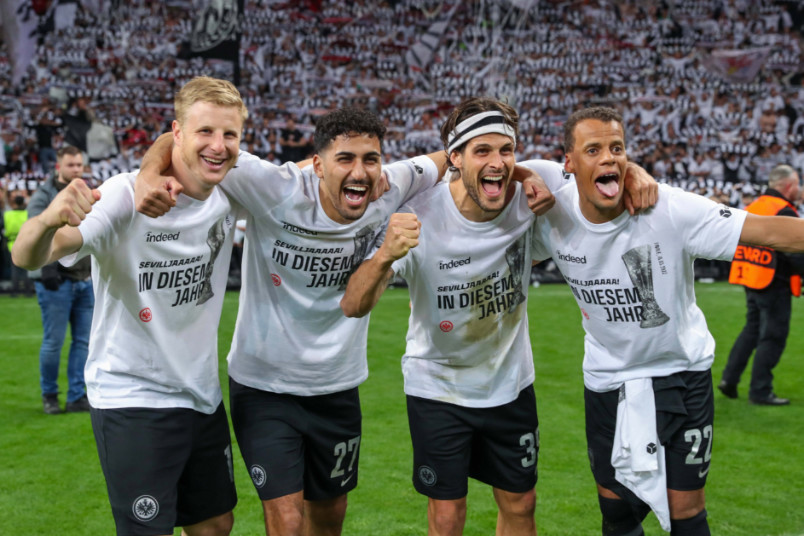 Friday’s soccer news starts in the Europa League. Timmy Chandler was on the bench for Eintracht, beating West Ham 1-0 at home on the night and advancing 3-1 on aggregate to the 201-22 Europa League final. Playing a man up from the 19th, Eintracht’s Rafael Borre scored in the 26th minute. In a game where the benches ended up involved and the referee sent off West Ham manager David Moyes, Chandler saw yellow in the 78th minute. Eintracht advances to play Rangers on May 18 in Seville.

“The success isn’t there yet,” Chandler said. “We’re in the final to bring the trophy back to Frankfurt. That’s what we’re going to work for and then there’ll be a really big party.”

James Sands was on the bench for Rangers in their 3-1 home win over Leipzig, advancing 3-2 on aggregate. Tyler Adams was on the bench for Leipzig. James Tavernier scored for Rangers in the 18th with Glen Kamara doubling the lead on the night in the 24th. Leipzig’s Christopher Nkunku scored for Leipzig in the 70th minute to level the aggregate score. John Lundstram scored Rangers’ winner in the 80th minute.

“I’m very proud of the achievement,” Rangers manager Giovanni Van Bronkhorst said. “Not many players can play European finals. It’s not for every player. Once we’re there, we need to do everything to win it. It’s remarkable.”

Cole Bassett wasn’t in the squad for Feyenoord’s 0-0 draw at Olympique Marseille, advancing 3-2 on aggregate to the Europa Conference League final. Konrad De La Fuente is out for Marseille. Feyenoord advances to play AS Roma, who beat Leicester City 1-0 on the night to advance 2-1 on aggregate. Tirana, Albania hosts the final on May 25.

In Serie A, Gianluca Busio subbed on in the 63rd minute and Tanner Tessmann was on the bench for Venezia’s 2-1 loss at Salernitana. Trailing from a 7th minute penalty, Thomas Henry equalized for Venezia in the 58th. Salernitana scored again in the 67th, finishing a man up from an 89th minute red card to Venezia’s Ethan Ampadu.

Saturday has the Premier League on USA: Chelsea vs Wolverhampton at 10am and Liverpool vs Spurs at 2:45pm. Brighton vs Manchester United is on NBC at 12:30pm.

Scottish Premiership on CBS Sports: Celtic vs Hearts at 7am. Ligue 1 on beIN sport: Brest vs Strasbourg at 11am. Primeira Liga on GolTV: Benfica vs Porto at 1pm and Portimonense vs Sporting at 3:30pm.

MLS on UniMas: Charlotte vs Inter Miami at 3:30pm. Liga MX on Univision: Cruz Azul vs Necaxa at 6:45pm. FS2 has Monterrey vs San Luis at 9pm.

Sunday has the Premier League on USA: Leicester City vs Everton at 9am and Manchester City vs Newcastle at 11:30am.

Ligue 1 beIN Sport: Metz vs Lyon at 7am, Angers vs Bordeaux at 9am, Lorient vs Marseille at 11am, and PSG vs Troyes at 2:45pm. La Liga on ESPN Deportes: Villarreal vs Sevilla at 10:15am. Primeira Liga on GolTV: Braga vs Arouca at 1pm. Serie A on CBS Sports: Hellas Verona vs Milan at 2:45pm.

Liga MX on TUDN: Puebla vs Mazatlan at 6pm. MLS on FS1: Austin vs LA Galaxy at 7pm.

Monday has the Super Lig on beIN Sport: Antalyaspor vs Konyaspor at 1pm. Serie A on CBS Sports: Fiorentina vs Roma at 2:45pm. All Times Eastern