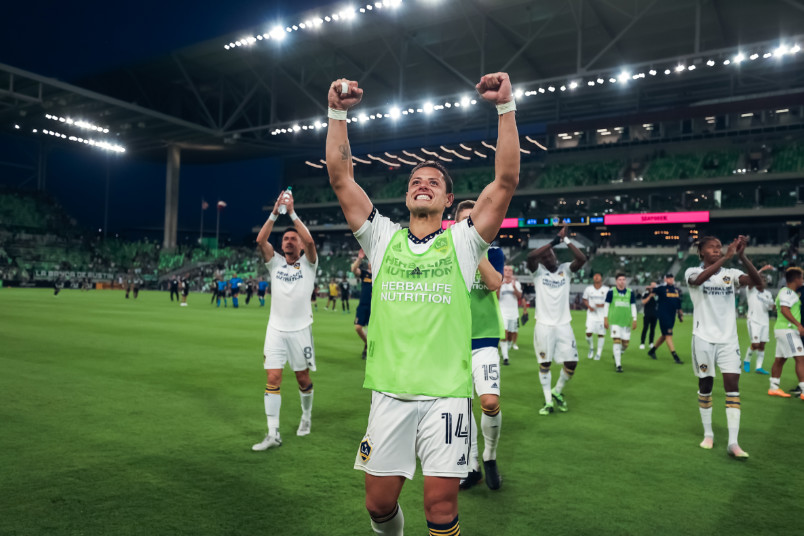 By Luis Bueno – RIVERSIDE, CA (May 11, 2022) US Soccer Players – Since the club’s inception, the LA Galaxy promised to field a roster of stars. From Cobi Jones and Luis Hernandez to Landon Donovan, David Beckham, and Robbie Keane, the team has traditionally delivered on that promise. This year’s roster is no different as it features Javier “Chicharito” Hernandez, Mexico’s all-time leading scorer, and former Bayern Munich and Juventus standout Douglas Costa.

No matter how much attention the team puts on its stars or how much money they spend to get them, the Galaxy is always more than the marquee. When the Galaxy won its first MLS Cup it was by a shutout. The Galaxy teams that won three of four MLS Cups early last decade did so by shutting down opponents, not overpowering them with offense.

The Galaxy is following that same blueprint this year. Through 10 weeks of the MLS season, the club has the third-best record in the league. Only LAFC has more wins than the Galaxy’s six, and the Galaxy beat LAFC earlier this season. The Galaxy’s defensive resurgence is the main reason the club has gone from a playoff hopeful to Western Conference contender.

Of course, the defense must keep its play up for the long haul, but early returns suggest that is the way this team is headed. Defense helped carry this team to past glory. If LA stays relevant this season, it will be because of its defense.

That is where the focus should have always been when the club was trying to move on from the Bruce Arena era. Across multiple reminders that the defense remained the problem, the Galaxy continued to put the focus on the attack. Easy enough when they brought in superstars, but there’s more to winning in MLS than goals scored.

LA needed a defensive effort on the last day of the 2021 season to make the playoffs. Needing a win to get past Minnesota and into the postseason, the Galaxy instead settled for a 3-3 draw. That may have been a lesson learned for Los Angeles. Right now, a similar situation might result in a different outcome. The Galaxy’s defense is finally coming together.

The latest outing was perhaps the Galaxy’s toughest test of the season. Sure, the Galaxy played LAFC. That was at home, and the Galaxy typically gets up for rivalry matches like that. On Sunday, though, the Galaxy traveled to Austin FC. While Austin wasn’t even around in 2020, they’ve been one of this season’s great revelations. Before the weekend’s games. Austin FC led the league in goals and had six wins, just one less than frontrunners LAFC. Austin FC star Sebastian Driussi was named MLS Player of the Month in April, collecting four goals and one assist while Austin FC piled up four wins.

The Galaxy struck early as Marky Delgado scored on a long-range shot in the sixth minute. For the remaining 84 minutes, Austin FC pushed for an equalizer. Playing in front of its raucous crowd has worked for Austin this season. They’ve already scored 15 goals in five games, including 3-0, 5-0, and 5-1 wins. Austin’s offense fell short. The likes of Driussi and Maxi Urruti (11 goals combined) were no match for the Galaxy’s backline.

LA’s center back pairing of Derrick Williams and Sega Coulibaly was stellar in helping propel the club’s win. Williams and Coulibaly have been together for all 90 minutes in each of the last four games. Perhaps not coincidentally, the Galaxy has allowed just one goal in those four games. The club has dropped points across that stretch, seven points out of a possible 12, but the defense has not been the culprit. Williams and Coulibaly just need to keep doing what they’ve been doing over the last month.

“It’s a commitment by the whole group to defending, to helping each other, to moving and working together,” Galaxy coach Greg Vanney said following the win at Austin. “The guys that are working to get pressure on the ball are obviously putting in the work, but the guys who are away from the ball are working hard to stay connected to close off space. To try to make things predictable for our defenders to deal with situations. It’s the only way you get there is just the collective work and staying connected as a group. And I think that whole group is committed to that, they’re taking pride in that and that’s obviously a hugely positive thing. So, we have to keep doing that. At the same time, we do that, we have to find a little bit of our scoring boots and see if we can’t help out the other side of things.”

Defense has been more of a Galaxy hallmark rather than Greg Vanney’s personal signature. Vanney had success with Toronto FC before joining the Galaxy, but Toronto was about scoring enough goals to win. The back could be slightly porous on occasion, but the offense would bail them out. When Toronto FC won the Supporters’ Shield in 2017 under Vanney, the club was second in defense, seven goals back of Sporting KC for fewest goals allowed. But the club led the league in goals (74) and goal-differential (+37).

As Delgado said after taking those three points home, “I think we can be a great team. But you know, greatness is hard and not everyone can suffer each game, 90 minutes, you know, and to be a great team, you need to be able to suffer when things aren’t going right…. We just really have to take pride in suffering because I 100 percent feel that we have a great team and we can go far, we just got to suffer for one another, and we have the quality at the end of the day.”

The latest version of the Galaxy is finding a hard-earned balance. It hasn’t been easy or straightforward for the Galaxy. Should this season continue to play out as it’s going, the defense will make the difference.