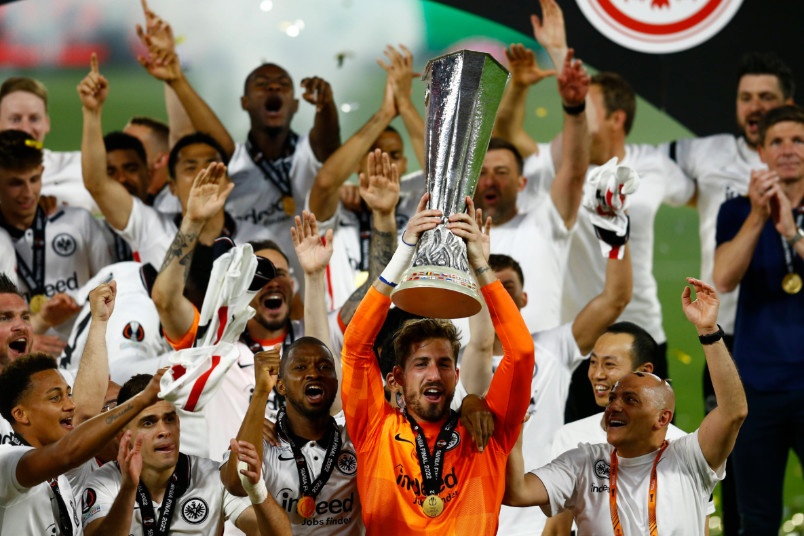 Thursday’s soccer news starts with Timmy Chandler’s Eintracht winning the 2021-22 Europa League. Chandler was on the bench for the 1-1 draw that held through extra time. Eintracht took the title 5-4 on penalties. James Sands subbed on for Rangers in the 101st minute. Joe Aribo put Rangers up in the 57th with Rafael Borre equalizing for Eintracht in the 69th. After Rangers failed to convert in the fourth round of penalties, Borre scored for Eintracht to win 5-4.

“The year got off to a tough start for all of us, but the players always believed in themselves and in us and were always fully committed,” Eintracht coach Oliver Glasner said. “That proves the kind of character and mentality that they have. The team spirit really developed. Everyone was always positive, even those who missed out on making it into the squad – they never stopped supporting the team. You need everyone to win a match like this one.”

If that sounds overly complicated, it’s not even that straightforward. The Eerste Divisie divides its season into four segments with each segment winner qualifying for the promotion playoffs if they don’t finish 1st or 2nd overall. Leavingout the four reserve teams that can’t move to the Eredivisie, eight of the remaining 16 teams either win promotion automatically or qualify for the playoffs. 17th-place Willem II and 18th-place PEC Zwolle were automatically relegated from the Eredivisie this season, replaced by FC Emmen and FC Volendam for 2022-23.

The Red Bulls and Chicago split the point at Red Bull Arena, drawing 3-3. Lewis Morgan put New York up from the penalty spot in the 20th. Chris Mueller equalized for the Fire in the 38th and Wyatt Omsberg scored in the 49th. With Cameron Harper leveling the score for New York in the 58th, Chicago got a go-ahead goal from Xherdan Shaqiri in the 89th minute. Patryk Klimala scored for the Red Bulls a minute into stoppage time.

“Definitely two points dropped,” Chicago coach Ezra Hendrickson said. “It’s a tie but feels like a loss. You’re on the road at a tough place to play against a very good team, and you put yourself in position to walk away with three points and in the blink of an eye, you let it slip away.”

Philadelphia and Inter Miami finished 0-0 at Subaru Park. The Union put eight of its 20 shots on goal to Inter’s two from nine.

“I suppose when you come to a team like Philadelphia and you get a point then you should be happy,” Inter Miami coach Phil Neville said. “But I feel, and the team feels, as if we probably dropped some points because we felt as if we controlled the game.”

Minnesota and the Galaxy drew 1-1 at Allianz Field. Sacha Kljestan converted an LA penalty in the 83rd and Robin Lod equalized for United in the 87th minute.

“I thought the first 10 or 15 minutes we started the game alright,” Galaxy coach Greg Vanney said. “And then in the first-half, we started trying to hit too many final passes. We started losing balls in our build out. We start getting a little anxious in possession. We’re not moving through spaces fast enough and they’re really pressing us. And it felt like because of it, we were losing balls pretty consistently in our half the field or we were hitting long balls of which their big center backs are just cleaning up. We got away from what our principles are.”

Seattle beat Houston 1-0 on the road. Raul Ruidiaz scored for the Sounders in the 28th minute with Stefan Frei making three saves to keep the clean sheet. Both teams finished a man down. Houston’s Adalberto Carrasquilla saw red in the 54th and Seattle’s Alex Roldan followed in the 82nd minute.

“Overall disappointed, especially in the first-half and the way we came out,” Houston coach Paulo Nagamura said. “On the field we were the better team. I don’t think we were good moving the ball around, too slow, lack of movement up top and it made it easier for Seattle to defend. We were missing that killer instinct to make shots, create chances and create goals. We tried to talk to the team at halftime and modify that. We came back and right away we had the second yellow card for Coco which put us at 10 men again. We were just trying to get in the game and to be honest, the guys did a good job with just 10 men.”

Nashville picked up three points at home, beating Montreal 2-1. Alex Muyl scored for Nashville in the 28th and Hany Mukhtar doubled the lead in the 51st. Kei Kamara pulled a goal back for Montreal in the 55th minute.

Sporting Kansas City beat Colorado 2-1 at home. Daniel Salloi scored for Sporting in the 24th with Lucas Esteves equalizing for the Rapids in the 29th. Salloi returned Sporting’s lead in the 50th. Both teams lost players to stoppage time red cards. Auston Trusty exited for the Rapids in the first minute of stoppage time with Esteves and Sporting’s Andreu Fontas following six minutes in. Three minutes later, Salloi saw red for Sporting.

Austin beat LAFC 2-1 at Banc of California Stadium. Ruben Gabrielsen put Austin up in the 13th and Diego Fagundez doubled the lead in the 80th. LAFC’s Carlos Vela converted an 86th minute penalty.

San Jose came back to beat Portland 3-2 at home. Cristhian Paredes scored for the Timbers in the 18th. San Jose equalized from a 31st minute Jackson Yueill goal and Jamiro Monteiro scored in the 44th. Portland got a 56th minute equalizer from Bill Tuiloma. Monteiro scored San Jose’s winner in the 80th minute.

In the soccer news, Weston McKennnie is back in training with Juventus. MLSsoccer’s Ben Wright looks at Nashville beating Montreal. The Guardian’s Max Rushden argues for better interpretations of soccer’s rulebook.