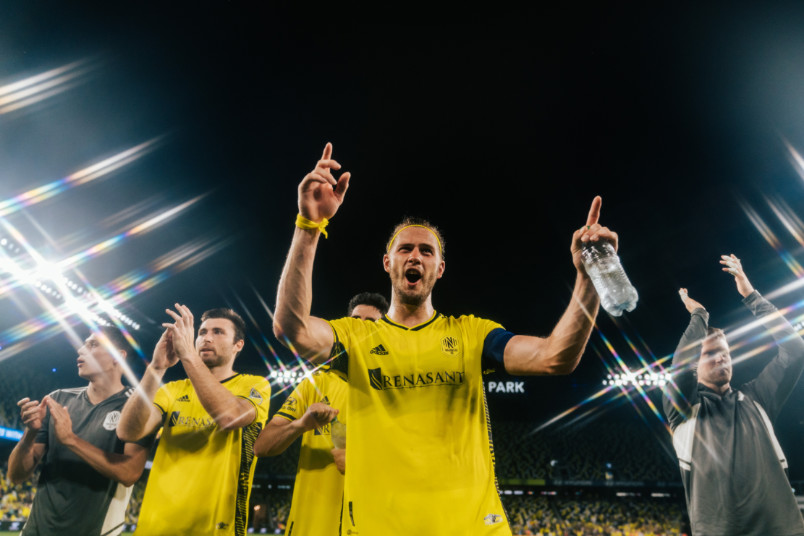 By Charles Boehm – WASHINGTON, DC (May 12, 2022) US Soccer Players – Herculez Gomez and Sebastian Salazar had to face a few unfamiliar questions as they got to work planning and hosting the new “GoalCast” whiparound show ESPN+ staged during Wednesday night’s packed slate of 10 US Open Cup matches. Running some seven hours from start to finish, it was a marathon broadcast with nine live interview guests, cutaways to 31 goals, and little to no precedent in modern American soccer media.

One of the most urgent logistical matters was also the least glamorous. How would they go to the bathroom?

“We hadn’t done it,” Salazar explained to USSoccerPlayers.com on Thursday. “We really didn’t know how the timing of it all would go. We were like, ‘maybe we just hold it in for seven hours?’”

Thankfully, that wasn’t necessary. Gomez, Salazar, and their small production team found ways to build in breaks for food, water, and other necessities for the cast and crew at their Southern California studio as they segued from game to game around the country as goals and other key events unfolded. It was one more example of problem-solving on the fly for a creative group hitting its stride since launching the well-received “Futbol Americas” biweekly show earlier this year.

“Really, we slammed together three things,” said Salazar. “We did a ‘goalcast’ – we did a red zone, effectively, tried our best to do that, as best you can do that in soccer. We did a ‘Manningcast,’ we invited guests on. And we did a ‘watchalong’ a little bit, too. Piecing all of that together takes a lot more than four (production) people, but somehow four or five of them got it done last night.”

Last month staffers at US Soccer approached the duo with the idea of them hosting Thursday’s draw for the tournament’s round-of-16 phase live on their show. They readily grabbed at that chance, then sought to build on the concept when this week’s fourth-round schedule was confirmed, even as it gave them just a few days of prep time.

“The real miracle of this show is what happened in the week and a half before,” said Salazar, noting that this round fell in the midst of a busy time at ESPN with the NBA playoffs ongoing and the NFL schedule release. “Our bosses’ bosses, the guys that oversee our production team, they moved mountains. At first we couldn’t even find a studio to even do today’s show, the live draw, in. We’re doing today’s show from the SportsCenter LA studio, we did last night’s show from the NBA studio. I mean, soccer never gets that studio. So there really were a lot of big pieces moved to make this happen.”

The show opened a few minutes before the first game of the evening, Charlotte FC at Richmond Kickers, kicked off just past 6:30pm ET, with Salazar and Gomez talking up their picks for “Cupsets” and standout games. It finally wrapped in the wee hours on the East Coast after the conclusion of the marathon penalty-kick shootout that decided Seattle vs San Jose in Tukwila, Washington.

Hardcore Open Cup fans could stick around for the long haul. More casual viewers could drop in or hop back and forth between the individual match streams also airing on ESPN+. It all added up to the look and feel of a showcase occasion for a tournament that deeply needs it, one of American soccer’s most beloved but chronically underexposed traditions.

“I think our (Futbol Americas) show is groundbreaking in the way we cover the sport just here in the country. Because we’ve not really seen a lot of that, at least on a platform like TV, and we’ve not really seen that in English,” said Gomez. “Seb and I grew up watching shows like this and we wanted to give the sport legitimate coverage the way that ESPN covers everything. I mean, ESPN covers everything that way and we wanted to treat football, soccer, the same way.”

Depending on schedule details, the Open Cup’s next round could provide another opportunity for a whiparound. And it’s quite likely that the network will apply lessons from Wednesday to other soccer properties like La Liga and the Bundesliga.

“For Futbol Americas, we’re really banking on people being a fan of more than one thing. If not, the way we do the show really is not going to be successful, right?” noted Salazar. “We’re always questioning and wondering – everybody who creates content in this space – is like OK, how many people are out there that are like me, who are into the Open Cup because it’s the Open Cup and would like to bounce around for each game? Or is that just people who are in the media?”

Competition for air and streaming time and other resources at the Worldwide Leader is stiff, even after many years of soccer coverage and investment in media rights like those of the Open Cup. Having passionate boosters inside the network makes a real difference, and solid audiences for Futbol Americas have helped its hosts build their case.

“The only way to prove that the model exists is by showing them with the consumers out there, and I think we’ve done that,” said Gomez, who said there are conversations about upping the number of episodes from the current two a week. “So then you start bringing in a concept or an idea like the Open Cup, which is awesome and under-served, and I think that’s it.”

While no viewership statistics have been made available yet, Wednesday’s show got a warm reception on social media and among industry insiders.

“Yesterday’s whiparound (drew) some of the most positive feedback, just in general, that I’ve gotten with my work at ESPN literally since I’ve been here,” said Gomez. “I had colleagues texting me, while I’m on air, how much they enjoyed the show. And people who are in or around the sport – I had players who were (texting) in their locker rooms. So it’s cool to receive that kind of feedback.”

Experiments like this one might even provide new insights into the elusive segments of the domestic soccer community who’ve yet to fully connect with MLS and other existing offerings.

“There’s something about the Open Cup that’s very easy for any sports fan, let alone a soccer fan, to understand, some really cool and unique storylines. And so I think as a result of that, it is the perfect competition to bring in more people under the umbrella,” said Salazar. “That audience, whatever that number is, that’s a critical audience for Futbol Americas, but I think for all of us in the American soccer media space. And we’ve got to find out how to grow that.”